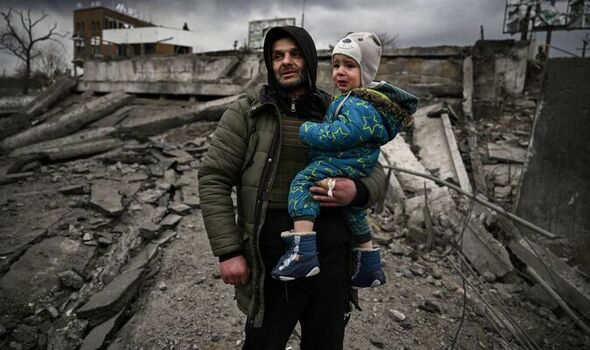 In a passionate television address, the defending nation’s leader said some of the youngsters were taken from orphanages, while others were those separated from their families by the war. “Russia is pursuing a consistent criminal policy of deporting our people,” he said.

“Forcibly deports both adults and children. “This is one of Russia’s most heinous war crimes. In total, more than 200,000 Ukrainian children have been deported so far. These are orphans from orphanages. Children with parents. Children separated from their families.

“The purpose of this criminal policy is not just to steal people, but to make deportees forget about Ukraine and not be able to return. But we must find a solution to this challenge as well. And ensure that all those who killed, tortured or deported Ukrainians are held accountable.”

Mr Zelensky said the Ukraine conflict has so far resulted in the killing of 243 children, while 446 have been injured with another 139 are missing.

Addressing the abducted children directly, the president stressed: “We will do everything we can to bring you all back.

“Bring all of you back as children, not adults. That is, bring you back soon. It is very important for us that you build our country and our future because you are our beautiful future, for which we are all fighting today.

Mr Zelensky’s concerns were shared by UNICEF who warned that in total, some 5.2million children had now been displaced since the start of Vladimir Putin’s invasion.

The charity said the conflict had resulted in devastating consequences for children at a scale and speed not seen since World War II.

Almost two out of every three children in the country have now been displaced by fighting.

UNICEF Executive Director Catherine Russell said: “We are solemnly approaching June 3 – the 100th day of a war that has shattered the lives of millions of children.

“Without an urgent ceasefire and negotiated peace, children will continue to suffer – and fallout from the war will impact vulnerable children around the world.”

In recent weeks, on average, more than two children are killed and more than four injured each day in Ukraine – mostly in attacks using explosive weapons in populated areas.

Civilian infrastructure on which children depend continues to be damaged or destroyed; this so far includes at least 256 health facilities and one in six UNICEF-supported ‘Safe Schools’ in the country’s east.

Hundreds of other schools across the country have also been damaged.

Conditions for children in eastern and southern Ukraine where fighting has intensified are increasingly desperate.

Meanwhile, on the frontline in Ukraine  yesterday, heavy fighting continued in the East of the country.

The UK’s Ministry of Defence said Russia has now taken control of most of the city of Sievierodonetsk, although Moscow’s forces have sustained heavy losses.

However, it added that the main road into the city is likely to remain under Ukrainian control.

The intelligence briefing also suggested Russia is facing severe challenges when it comes to crossing the Siverskyy Donets River — a vital objective as it prepares to shift focus from consolidating in the Luhansk region to pushing ahead in Donetsk.

Although there are various possible crossing sites, the UK assessment is that the river line “likely still remains controlled by Ukrainian forces, who have destroyed existing bridges.”

The ministry predicts that Russia will need a short, tactical pause ahead of making “opposed crossings [of the river] and subsequent further attacks further into the Donetsk Oblast, where Ukrainian armed forces have prepared defensive positions.”

The report speculates that such a hiatus for Moscow’s troops “risks losing some of the momentum they have built over the last week.”

Some 800 people are still hiding in several bomb shelters underneath the Azot chemical factory in Severodonetsk, which has been targeted by Russian missile attacks, Serhiy Hayday, the head of Luhansk region military administration, said yesterday.

“There are locals there, who were asked to leave the city,” Mr Hayday said.

“But they refused. There are also children there, but not many of them.”