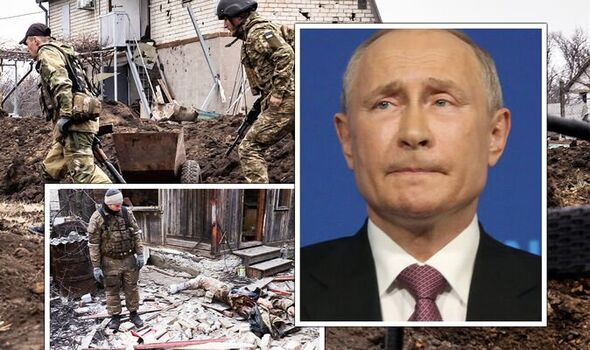 The Russian Foreign Minister has defended Russia’s aggression in Ukraine and lashed out at Britain’s continued support of the attacked nation. Mr Lavrov told the BBC: “Russia is not squeaky clean. Russia is what it is. And we are not ashamed of showing who we are.” Since the Russian invasion began on February 24, the international community has been collecting evidence of war crimes which includes the use of banned thermobaric bombs. Russia has repeatedly shown frustration at the UK’s continued support of Ukraine which includes sending weapons, taking refugees and slapping Moscow with crippling sanctions. Mr Lavrov continued: “I don’t think there’s even room for manoeuvre any more, because both [Prime Minister Boris] Johnson and [Liz] Truss say openly that we should defeat Russia, we should force Russia to its knees. Go on, then, do it!”

The UK will “highly likely” add many hundreds more troops to a NATO force in Estonia tasked with deterring Russia, but some could be based back home, the Defence Secretary has revealed.

Adding a third battlegroup would turn it into a brigade.

Speaking at the NATO headquarters in Brussels, Defence Secretary Ben Wallace said: “The key areas of discussion are how our forces are going to be distributed – how permanent versus how deployable, versus how ready, will be the main area of discussion.”

Good morning from London. I’m Tara Fair, I’ll be bringing you all the latest developments on the conflict between Ukraine and Russia. Please feel free to get in touch with me as I work if you have a story or tips to share! Your thoughts are always welcome.