The past few weeks have seen a marked shift away from the sunny weather enjoyed for much of May, as heavy downpours and strong winds moved in. But forecasters expect the high temperatures and bright sunshine to return this week – and the sizzling sunshine could last until mid-July.

Met Office forecaster Matthew Box told Express.co.uk the change in weather, which brought heavy downpours and thunderstorms in parts of the UK, was due to a “persistent low cloud” and areas of swirling weather systems.

While he expects the rest of the month to be characterised by bouts of rain, temperatures do look set to rise with drier, sunnier spells breaking through.

This week the mercury is forecast to settle in the mid-20s for much of the UK.

Mr Box said Monday morning is likely to be characterised by mist and fog for England and Wales, with cloudier and potentially drizzly weather for the rest of the day.

But by mid-week Britons can expect some good bouts of sunshine, but the forecaster cautions there is still a risk of showers and even thunder for parts of the UK. 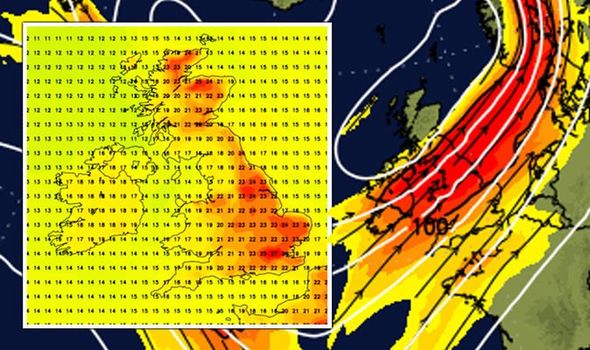 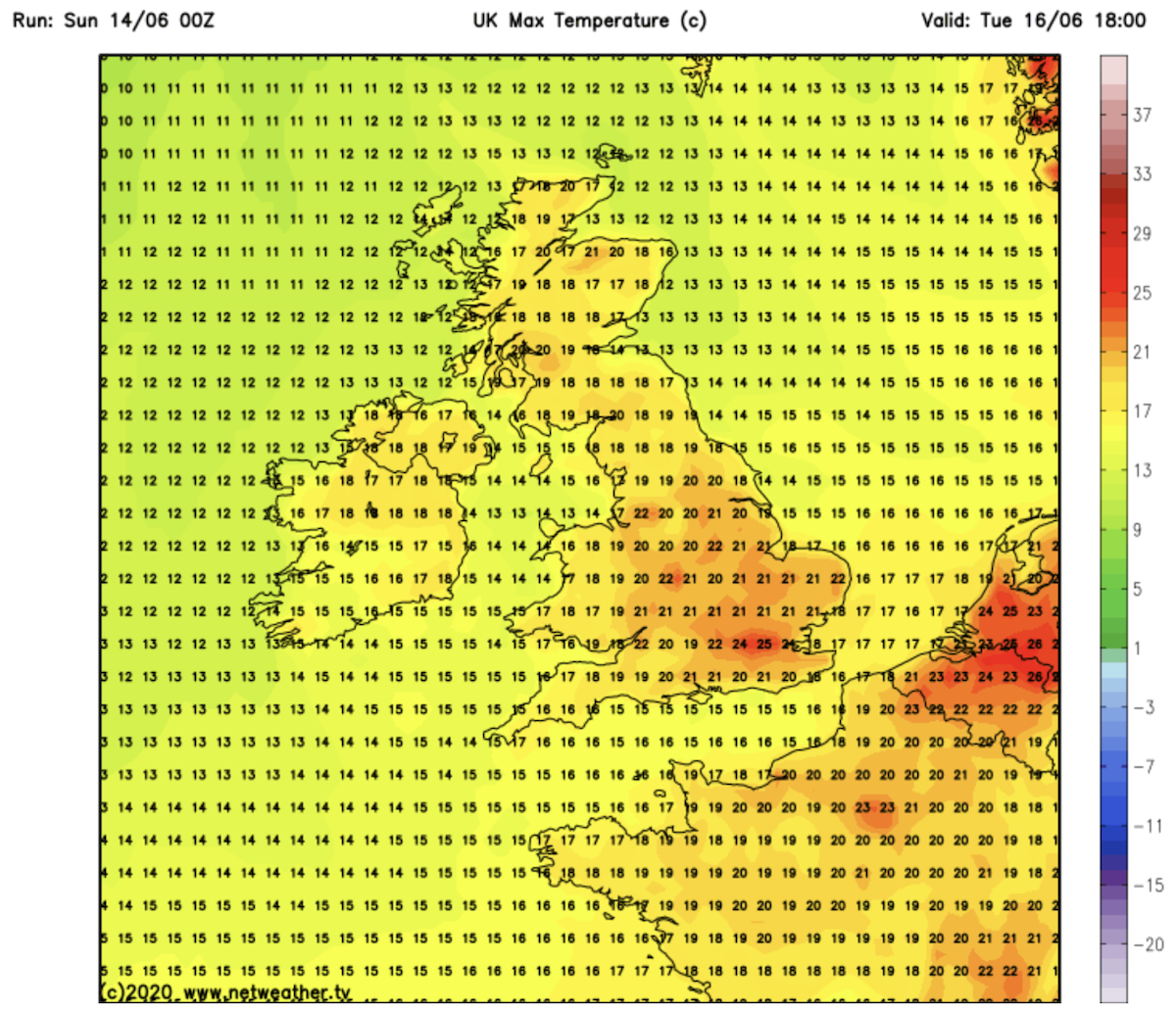 Mr Box told this website: “The general theme is a risk of thundery downpours but we will see some warm sunshine as well.

“Temperatures should peak in the low to mid 20s.”

Netweather forecasters expect the mercury to hit highs of 25C in the coming week.

On Monday through to Wednesday the mercury is set to rise to 25C in the south of England and the midlands, before falling slightly on Thursday to the early 20s. 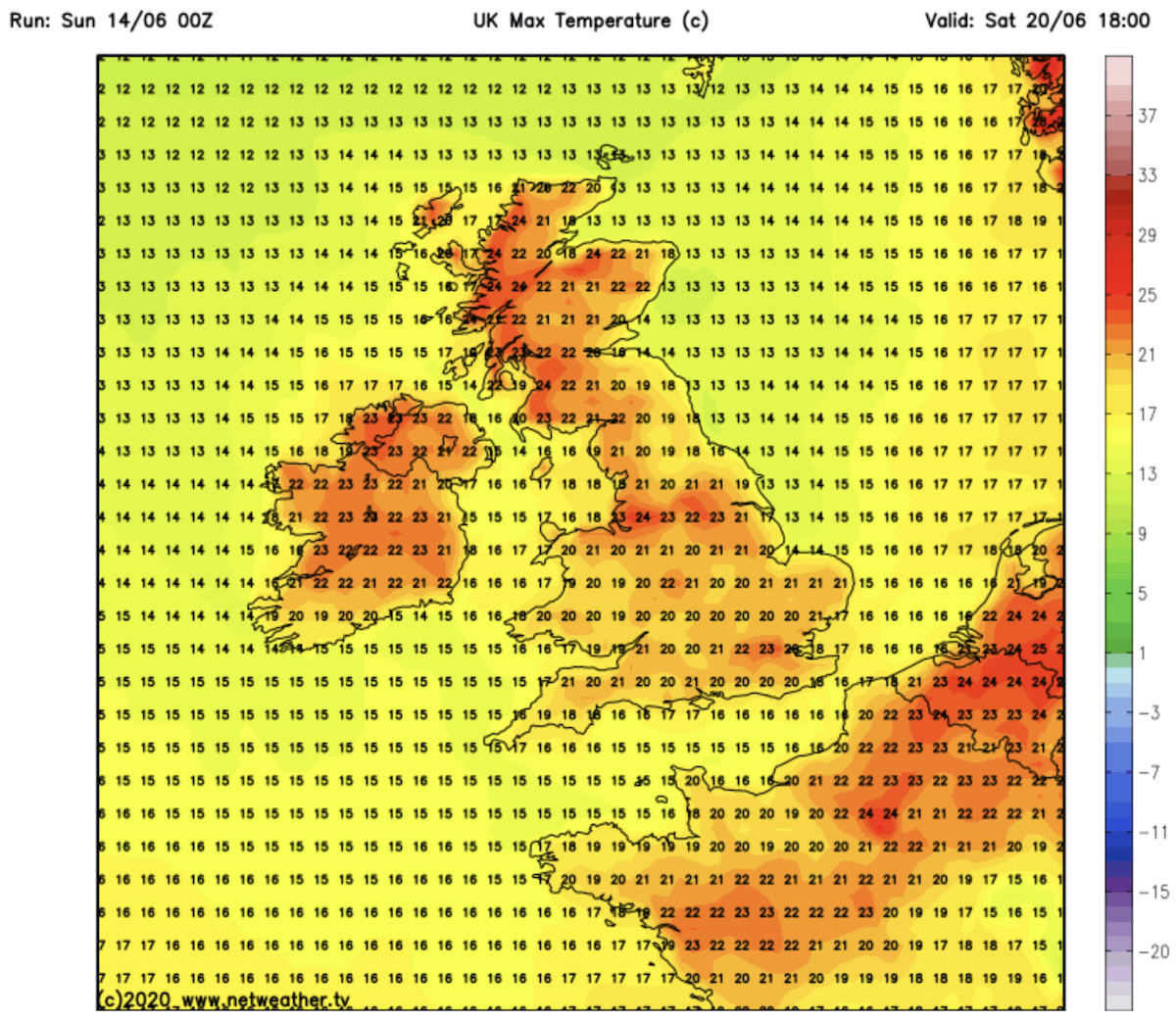 But temperatures will drive back up to highs of 25C again on Friday.

Britons can expect to bask in scorching temperatures over the weekend, as the warm weather covers much of the UK – particularly the midlands and northern Scotland.

The mercury is set to soar to 27C on Sunday June 21 as the east coast sees the best of the sizzling sunshine.

As we head into the last week of June, Mr Box expects drier and brighter interludes to breakthrough as temperatures near their yearly average. 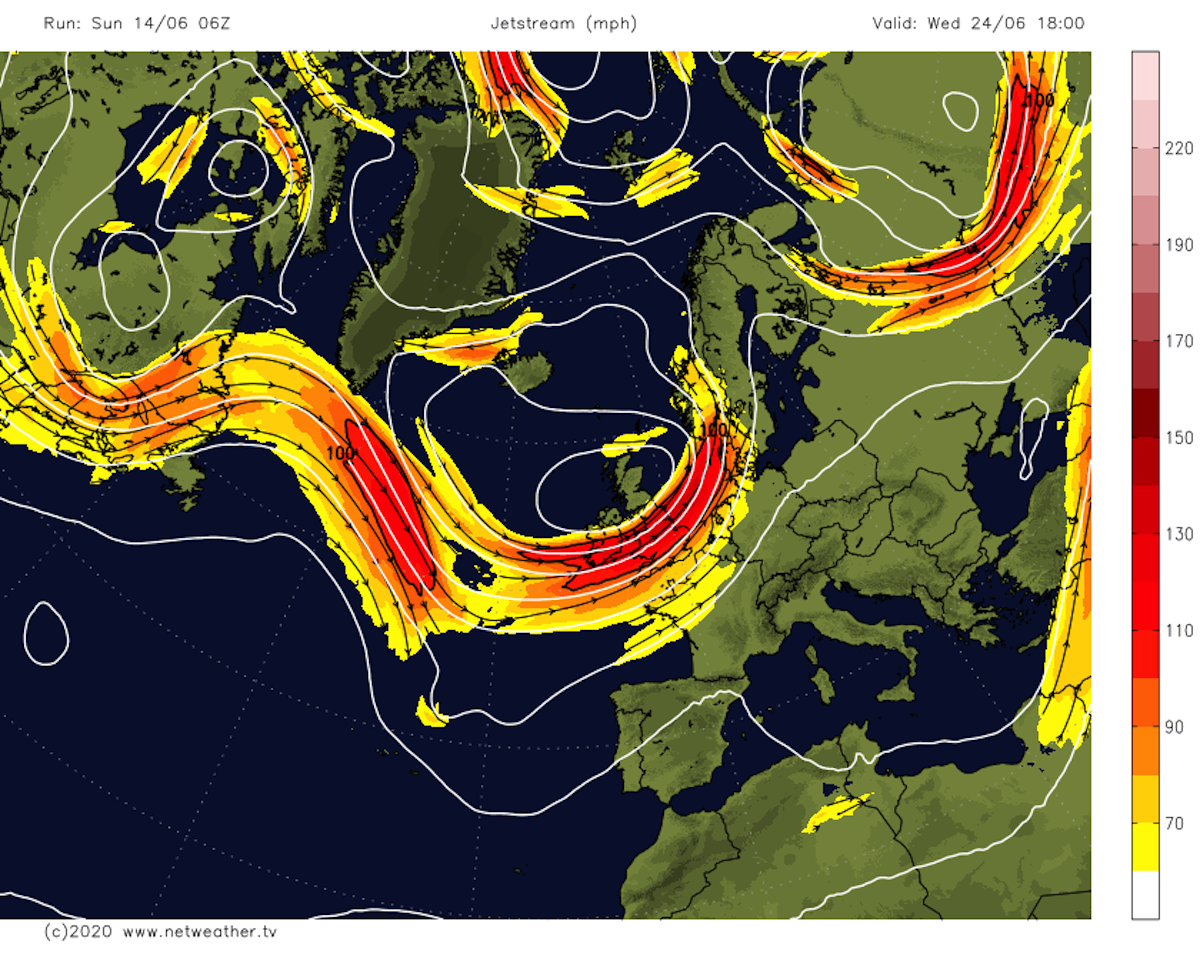 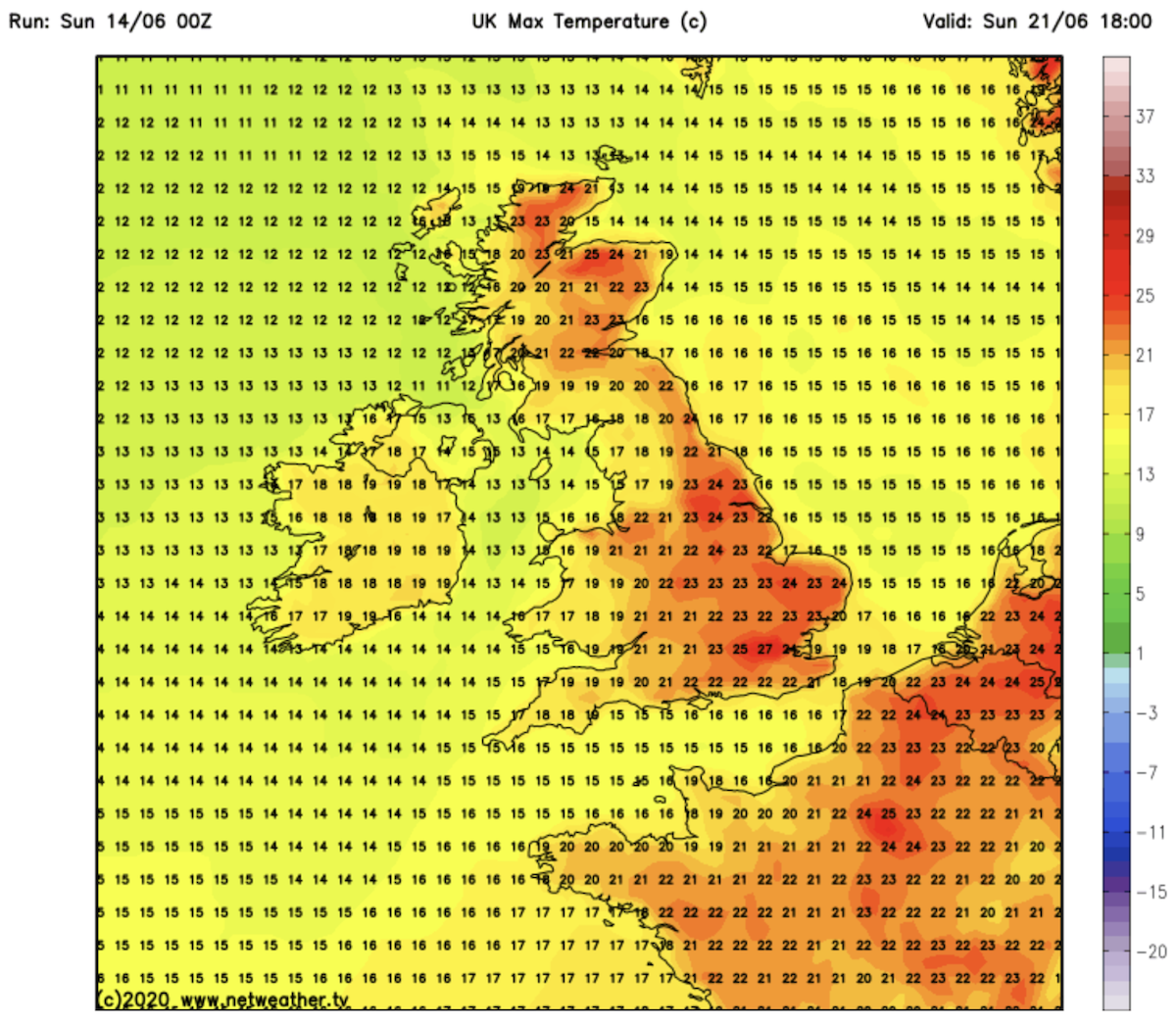 But he warned: “There is always a chance of some showery conditions.

“They are going to be interspersed by drier sunnier interludes.”

As we move into July, the weather will start to become more settled and drier as the mercury backs up.

Weather maps by Netweather show a period of high pressure is set to sweep across the UK on Wednesday June 24, which is likely to drive temperatures up.

Similar jet streams are forecast to move in the following day and on Tuesday, June 30. 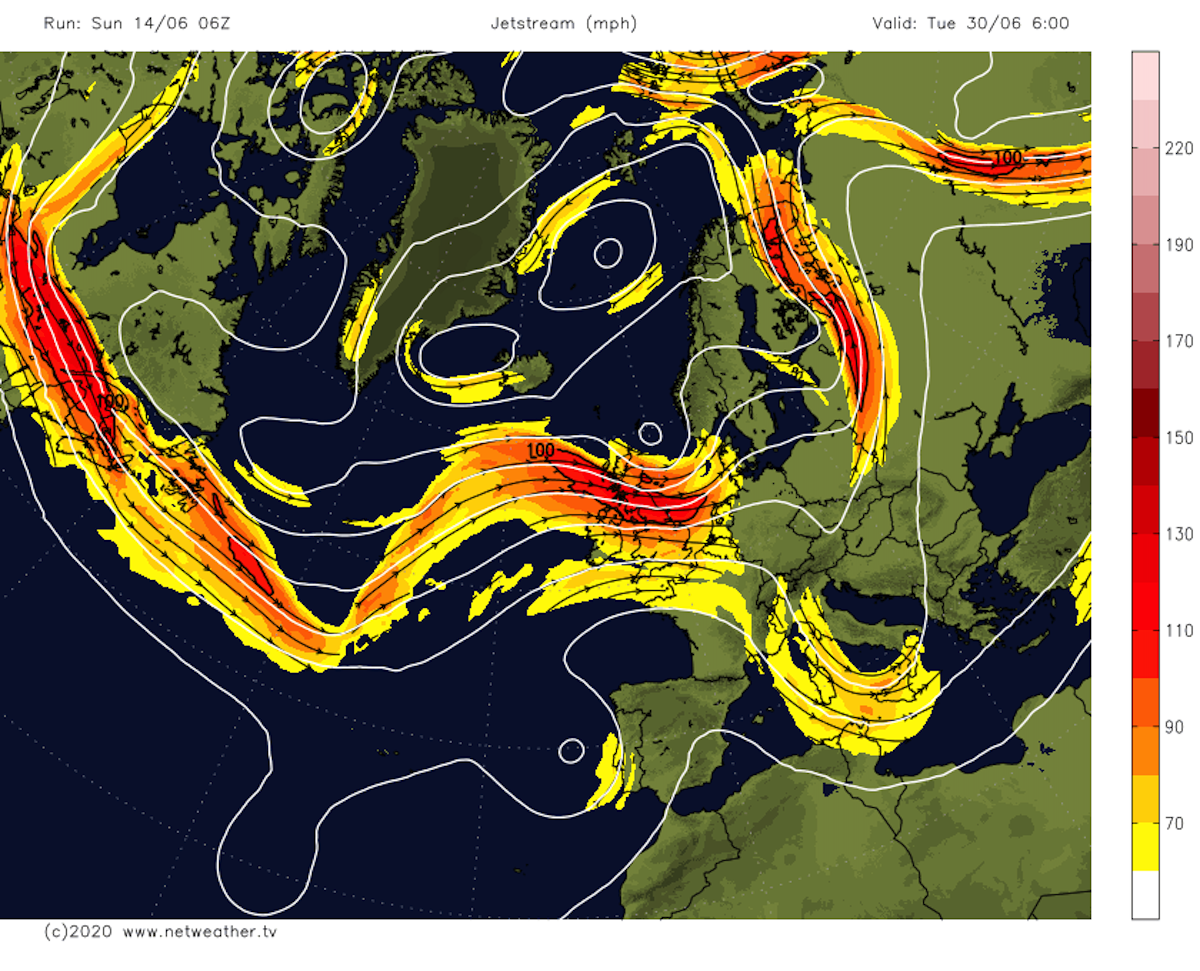 As we move into July, the sunshine look set to persist.

BBC weather forecasters expect the south of England to be largely dry and warm as high pressure builds and extends across Western Europe.

But the north of the UK are set to experience more unsettled, wet conditions as low pressure troughs move in.

The forecasters said: “Northern areas can expect periods of wet, breezy and cool weather, whilst southern areas should be drier, calmer and warmer.”