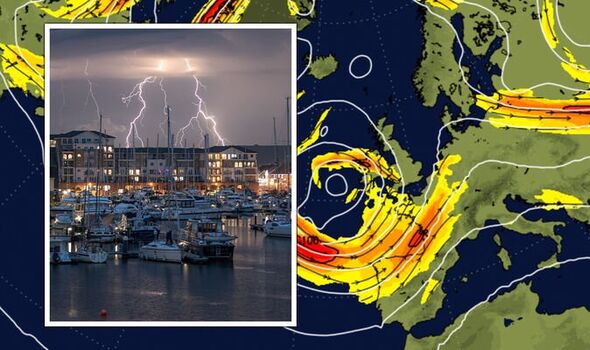 Heavy downpours threaten flooding and travel chaos before the remains of Hurricane Danielle sweep in at the weekend. Both systems threaten a turbulent start to autumn and the run-up to what is feared will be an exceptionally active Atlantic hurricane system.

A steady barrage of Atlantic cyclones will target Britain through the coming weeks as the storm season takes hold.

Jim Dale, meteorologist for British Weather Services, said: “There is a conveyor belt of low-pressure systems lined up to stir up Britain’s weather through the next week or so.”

Tuesday will kickstart a week of wet weather with only a brief lull on Saturday before the remains of Danielle arrive.

Showers through the next 24 hours could turn heavy in parts bringing the risk of floods and dangerous driving conditions, according to the Met Office.

Government forecasters issued thunderstorm warnings across eastern and south-eastern Britain this morning, with more likely through the coming days. 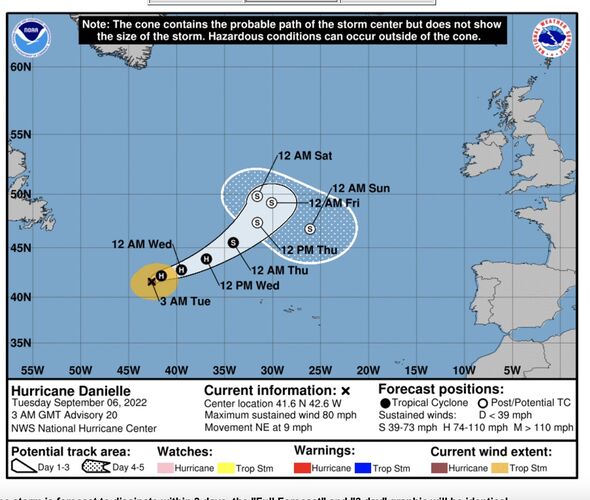 Met Office meteorologist Alex Deakin said: “It is a slightly unusual week of weather dominated by one area of low pressure, which will control things for a few days, and this is unusual.

“It will bring spells of wet and windy weather spiralling around it.

“Showers will be hit and miss on Tuesday, but they will also be heavy and could turn into thunderstorms with hail likely.”

Warm southerly winds will sweep around the low on Wednesday pushing temperatures in parts into the 20Cs, he added.

He said: “Winds on Wednesday are coming in from the south and when the sun comes out, we could see temperatures getting into the low- or even mid-20Cs across eastern England.

“That low pressure finally pulls away by the weekend, and at the moment Saturday looks like a largely dry day but there is another area of low pressure bringing some uncertainty into the weekend and into next week.

“This has tropical origins, starting out as Hurricane Danielle in the subtropics, as it drifts northwards it will no longer be a hurricane.

“There is a lot of uncertainty as we go towards the weekend, and certainly something to keep a very close eye on over the next few days.” 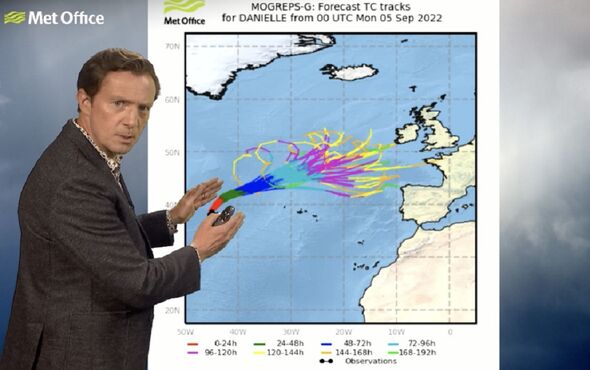 Hurricane Danielle has weakened from a hurricane to a tropical storm on its path eastwards from the US towards Britain.

It is forecast to edge towards the west coast of Ireland on Saturday before its remains are swept into UK weather patterns.

Mr Dale, author of Weather Or Not? said: “Danielle will arrive as a low-pressure system and could bring unsettled conditions later in the weekend.

“It is followed by another low, which will also bring the risk of wind and rain.

“This picture could hold out through the start of autumn.”

It comes after the Met Office predicted an above-average hurricane season, with Danielle likely to be the first of several.

The hurricane’s remains will surge in on Sunday after a dry and sunny start to the weekend, experts warn. 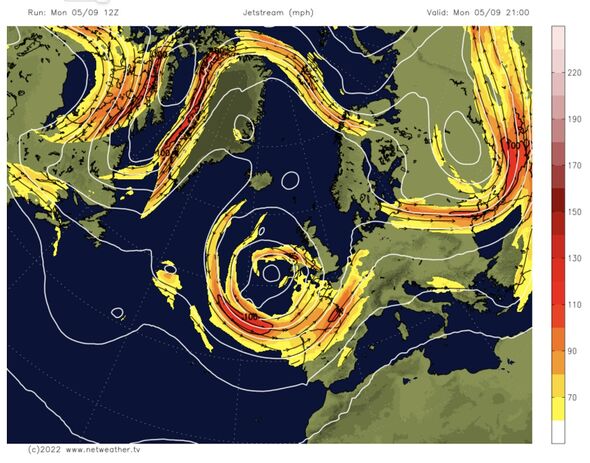 Netweather forecaster Nick Finnis said: “The weekend, for now, is looking calmer, sunnier and drier, as the showery low that’s with us all week moves away east over the near Continent.

“However, we could see a batch of heavy rain and stronger winds spread in across western areas through the afternoon, heralding a change to more unsettled conditions.

“This change back to more unsettled conditions likely spurred on by the remnants of ex-Hurricane Danielle, currently out over the mid-North Atlantic.”

Bookmaker Ladbrokes has slashed the odds on next week bringing the wettest day of the year.

Bookmaker Ladbrokes has slashed the odds from 2-1 to 10-11 on the wettest September on record.

Spokesman Alex Apati said: “There’s every chance this month enters the record books for all the wrong reasons with heavy thunderstorms already beginning to batter Brits.”