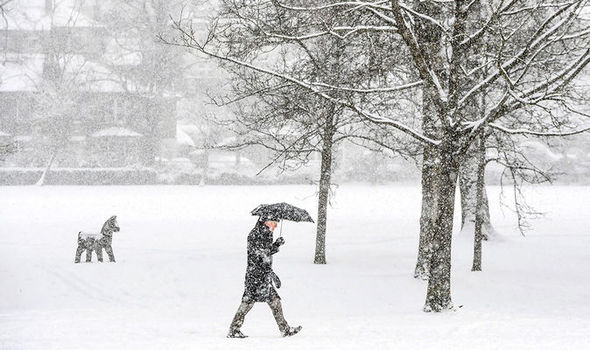 A polar surge on Christmas Eve will ‘battle’ with Atlantic storms as the UK braces for ‘debilitating’ blizzards. Temperatures will nosedive to -10C through Christmas Day as possibly the worst festive freeze for more than a decade grips the nation.

Jim Dale, meteorologist for British Weather Services, said: “The cold will set in on Christmas Eve as Polar air from Scandinavia starts to sweep the UK.

“A low-pressure system from the south will clash with this and battle it out bringing snow as this cold air sinks further down across the UK during Christmas Day.

“We then see the cold air remaining over Britain through the following week and into New Year with more ice, frost and the possibility of further snowfall.”

A massive storm approaching the UK in the interim could trigger blizzards across swathes of the country.

The rapidly deepening low-pressure system due after Christmas Day could generate the third named storm of the year ‑ Corrie.

Mr Dale said: “If this low which looks to approach the UK after Christmas deepens enough it could generate another storm name.

“As it clashes with the cold air over the UK it will bring some more very wintry conditions including ice and blizzards in parts of the country.

“We are on the precipice of what could be a debilitating spell of winter weather which could generate enough snow to affect travel and keep people from leaving their homes.

“The air over Scandinavia is perilously cold and as soon as it starts pushing towards us, which we think will be mainly from Christmas Eve, we are into the territory of severe winter conditions.”

Changing weather models have for weeks had forecasters tussling over the Christmas forecast.

Most now agree Britain could see the first festive snow since the big freeze of 2010 which brought record snowfall and low temperatures.

Bookies have once again taken the axe to winter weather odds with Coral now offering 1-3 on Christmas snow.

Spokesman John Hill said: “With temperatures set to drop the chances of a White Christmas are increasing all the time.

“Our betting indicates there is a 75 percent chance of snow falling on Christmas Day in the UK.”

Britons are warned to batten down the hatches for the winter blast to grip in the run-up to 2022.

Bitter winds from the East threaten to push temperatures into minus double figures, according to some forecasts.

Exacta Weather’s James Madden said: “The risk of snow will start to increase significantly in the period between Christmas and New Year.

“We could see temperatures of -10C in parts as a more easterly influence becomes dominant across the UK.

“Significant snow events will remain a risk into the start of January.”

Grey, gloomy, foggy weather will cling on through the next few days before the winter blast roars in, according to the Met Office.

A spokesman said: “This dry weather continues for a time with variable cloud cover across most of the nation, although occasional showers may be possible for north and eastern coastal regions.

“Towards the middle of this period the threat of rain or wintery conditions increases, particularly towards the south and southwest.

“During this time some stronger winds are possible, although these are likely to be confined to southern regions.”