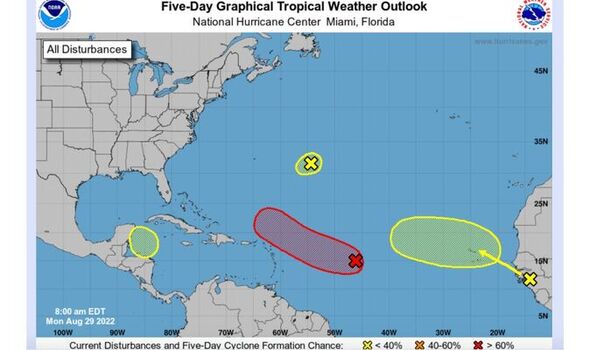 The US National Hurricane Centre and Central Pacific Hurricane Centre has reported three ‘disturbances’ forming in the Atlantic. Ex-tropical storms and ex-hurricanes can strike the UK during autumn, sweeping eastwards from the United States and delivering bouts of wind and rain.

But earlier this summer, the Met Office confirmed a higher than usual number of tropical storms were expected.

Experts have warned to take cover for an explosive storm season, made worse as the atmosphere restores balance after the freakish summer of heatwaves.

Jim Dale, meteorologist for British Weather Services, said: “During the start of September, the jet stream moves southwards, which doesn’t necessarily mean the end of summer, but I do expect to see more in the way of Atlantic activity, and more in the way of low pressure.

“Don’t be surprised if there is some big event during the month.

“Once we get past the bank holiday, we are looking at the possibility of a big change in the weather.

“The Atlantic will get going in September, and there is everything to play for.”

Much-needed rainfall across southern UK will begin to replenish water reserves, while a deluge in the south sparks floods, he warned.

A ‘balancing effect’ in the atmosphere threatens an unsettled autumn after the hot and settled summer, he added.

He said: “We don’t go through a heatwave like we have seen this summer without some balance and payback during the autumn.

“We will have to keep our eyes on hurricane activity through the next couple of months because there might be some intense activity as September unwinds.

“We will start to replenish lost water, and we might even have too much rain in parts of the northwest, while in the south, the rainfall will be welcome.”

In the meantime, Britain will enjoy a few more days of dry sunshine with temperatures in the low- to mid-20Cs.

High pressure will cling on drawing easterly winds in from the Continent, although coastal regions will be cooler in North Sea gusts.

Fine weather will hold on through the rest of the week before low pressure pushes in by the weekend.

BBC weather forecaster Sarah Keith-Lucas said: “There is not too much rain in the days ahead, with high pressure in charge things are looking mainly dry with some spells of sunshine.

“A big, slow-moving area of high pressure is a frequent feature in the forecast.”

“Temperatures-wise on Wednesday will be very similar to the next couple of days, perhaps a degree or so warmer in the south at 24C, while further north we are a touch down on that, particularly where we have that breeze coming in from the North Sea.” 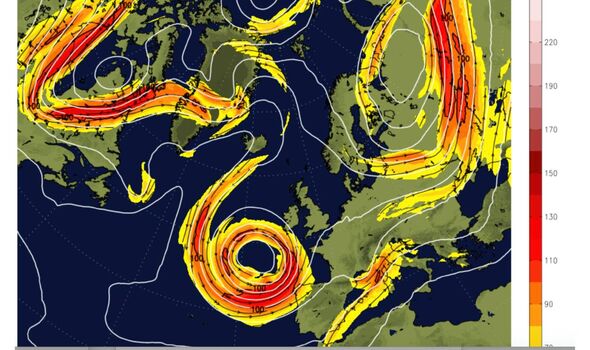 The weather will turn cooler and more unsettled next weekend thanks to a ‘kink’ in the jet stream driving low pressure, she added.

She said: “We have a kink in the jet stream which is forming areas of low pressure to the west.

“This is about six to ten days ahead, and this may move a bit further south and head its way in gradually pushing low pressure towards the UK and bringing something a bit cooler.”

This autumn is likely to be blighted by unusually active tropical cyclone activity, according to the Met Office.

Government forecasters predict and uptick in the number of tropical features forming around Central and Northern America.

These can sometimes make their way eastwards towards the UK after hitching a ride on the jet stream.

This was the case with the devastating St Jude Day storm which struck in October 2013 and killed at least 17 people.

The storm, which started as an extratropical cyclone in the central Atlantic and was whipped into Britain by the jet stream.

Mr Dale, author of Weather Or Not? and an expert in weather safety and impacts, said: “The energy carried in these systems as they approach the UK can have an impact on our weather.

“Sometimes they drive unsettled conditions, and other times they can encourage warm air up from the south.

“Usually, they have largely blown themselves out by the time they get across the Atlantic to Britain.”
Experts have warned the Atlantic has started to give signals it is ‘waking up’ ready for the autumn onslaught.

“[There are two] potential systems in a few days… [this] has to be treated with much caution but emphasises that ingredients are starting to come together.”

Marco Korosec, of Severe Weather Europe, added that the Atlantic is ‘awakening’ for the 2022 hurricane season.