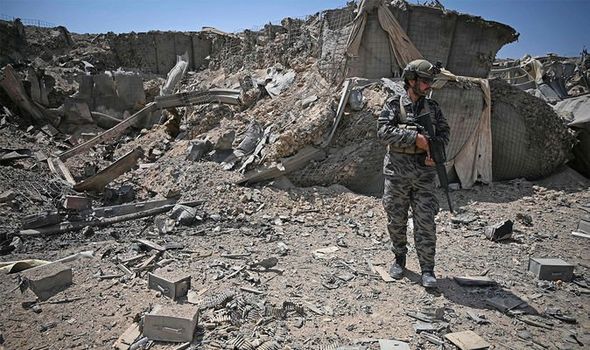 The Islamists’ flag was hoisted above Bazarak, the capital of Panjshir. But Massoud, 32 — a King’s College London and Sandhurst graduate — tried to rally Afghanistan citizens.

He said: “I call on you to begin a national uprising for the dignity, freedom and prosperity of our country.”

His father Ahmad Shah, known as the Lion of the Panjshir, fought Soviet invaders in the 1980s but was murdered by the Taliban.

The militants’ fighters, armed with weapons left by departing US forces, took eight districts of Panjshir at the weekend. But the National Resistance Front of Afghanistan (NRF) told the BBC it “continues to fight” the Taliban and is present in “all strategic positions”.

He claimed: “They will not be subjected to any discrimination. We will serve a country and a common goal.” Meanwhile Afghan women took to the streets of Mazar-e-Sharif, calling for fundamental rights to be guaranteed.

Thousands of children and adults who fled the Taliban takeover have set up home at the US Ramstein Air Base in southwest Germany.

There are 17,000 refugees at military sites across Germany.

It was revealed yesterday that part of a CIA compound in Afghanistan known as Eagle Base was razed ahead of the US pulling out of the 20-year conflict. It was used for clandestine evacuations and to train Afghan counterterrorism units.

Salt Pitt — the CIA’s first detention and interrogation site there — was demolished too, to stop the Taliban seizing sensitive materials.