WASHINGTON (Reuters) – President Donald Trump and Secretary of State Mike Pompeo on Friday came close to blaming Iran for a rocket attack in Iraq last week in which two American troops and a British service member were killed. 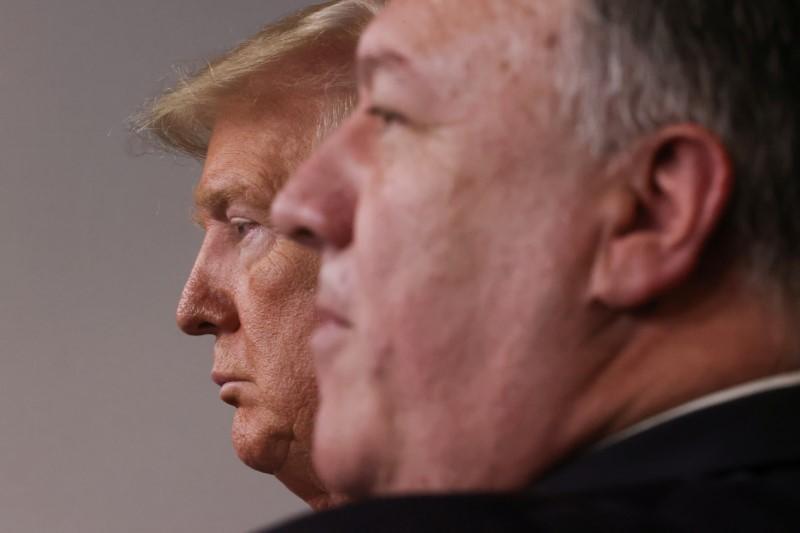 “Maybe we shouldn’t say yet,” said Trump when the question was posed to Pompeo at a White House news conference. Said Pompeo: “Let me just get back to you on the answer to that.”

The Pentagon said last week that Trump had authorized the U.S. military to respond to the March 11 rocket attack in Iraq. Trump has been preoccupied with addressing the coronavirus pandemic.

The United States has blamed Iran-backed militia for the attack but has not yet said whether it was linked to the Iranian leadership in Tehran.

Tensions have been running high between the two longtime adversaries since Trump ordered a U.S. drone strike that killed Iranian military commander Qassem Soleimani on Jan. 3.

When Pompeo was asked about whether Iran was responsible, Trump interjected: “We know plenty.”

Pompeo added: “We’ve made clear that the Iraqi Shi’a militias are funded, trained and equipped by the Iranians. We’ve urged the Iranians not to do that. We’ve told the Iranians that they will be held responsible for those attacks when they threaten American lives.”

Despite the tensions, the United States has offered humanitarian assistance to Iran while it struggles with the coronavirus outbreak. Iran is one of the countries outside China that has been most affected by the pandemic. On Friday, Iran said its death toll from the outbreak rose to 1,433.

Pompeo suggested that tough U.S. sanctions on Iran would continue over its nuclear and ballistic missile programs despite some appeals for them to be relaxed due to the virus.

“The whole world should know that humanitarian assistance into Iran is wide open. It’s not sanctioned,” he said.

“There is no sanction on medicines going to Iran, there’s no sanctions on humanitarian assistance going into that country. They’ve got a terrible problem there and we want that humanitarian medical health-care assistance to get to the people of Iran,” he said.

Trump said in a message to Iran to mark the Nowruz holiday that “the people of Iran have made it clear that they want leadership that represents them, not the interests of its corrupt regime.”

“The Iranian people deserve leaders who listen to, respect, and invest in them, not leaders who target and persecute them while wasting money to advance their nuclear ambitions and test more missiles,” he said.