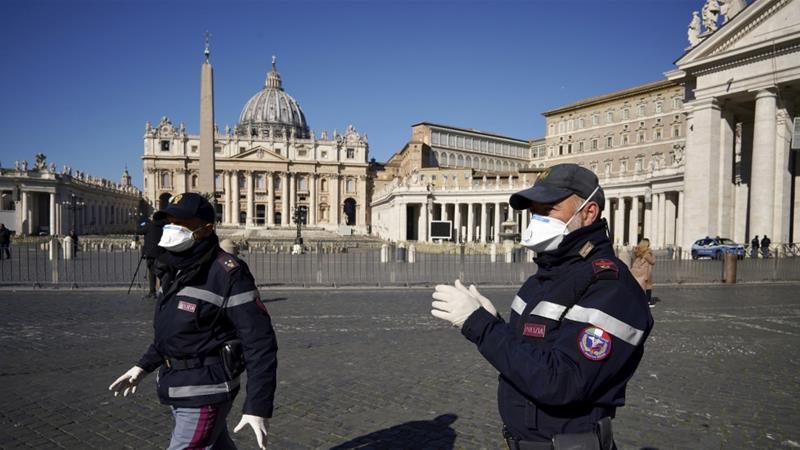 Hello and welcome to Al Jazeera’s continuing coverage of the coronavirus pandemic.

Here’s a summary of developments on Sunday:

Governments around the world stepped up restrictions on daily life, and the movement of people in a bid to curb the spread of COVID-19. More than 153,000 people have been confirmed to have the virus globally, according to the World Health Organization (WHO). The number of dead has risen to nearly 5,800 people.

Italy reported 368 new deaths from the coronavirus while the number of confirmed cases rose to 24,747, according to the country’s civil protection authority said.

Iran announced more than 100 people had died in the past 24 hours, with the confirmed cases nearing 14,000. Tehran said its fight against the outbreak was being severely hampered by US sanctions.

Here are the latest updates:

Taking to Twitter, the mayor told New Yorkers: “This is not a decision I make lightly. These places are part of the heart and soul of our city. They are part of what it means to be a New Yorker. But our city is facing an unprecedented threat, and we must respond with a wartime mentality.”

Earlier, he announced schools in the city would close from March 16 with online learning to begin a week later.

Cambodia has reported four new cases of the coronavirus, including a four month old baby.

The Federal Reserve, popularly known as the Fed, took the extraordinary step on Sunday of slashing its benchmark interest rate to near zero and unveiled a slew of measures to unfreeze credit markets as the United States central bank moved to defend the US and global economies against the impact of coronavirus pandemic disruptions.

“The coronavirus outbreak has harmed communities and disrupted economic activity in many countries, including the United States,” the Fed’s policy-setting committee said in a statement on Sunday. “Global financial conditions have also been significantly affected.”

You can read more on that story on Impact.

South Korea has expanded special screening measures to arrivals from all European countries amid concerns of imported cases.

“The coronavirus seems to spreading in Europe at an unusual pace,” the news agency reported  Prime Minister Chung Sye-kyun as saying.

Arrivials will have to complete health documents, have their temperatures taken, notify health authorities of their whereabouts and download a self-check health app.

The KCDC announced 74 new cases in South Korea on Monday, bringing the total to 8,236.

Overall cases of coronavirus in mainland China continue to drop but major cities including Beijing and Shanghai are now grappling with cases involving infected travellers arriving from abroad.

Mainland China had 16 new confirmed cases on Sunday, the National Health Commission said on Monday, bringing the total number of confirmed cases in China so far to 80,860. It had 20 new infections the day before.

Of the new figures, 12 were imported infections, exceeding locally transmitted cases for the third day.

The Centers for Disease Control and Prevention in the US is recommending that all gatherings of 50 people or more are cancelled or postponed over the next eight weeks, and that smaller events should go ahead only if they meet CDC guidelines for vulnerable people, hand hygiene and social distancing.

The CDC said: “Large events and mass gatherings can contribute to the spread of COVID-19 in the United States via travelers who attend these events and introduce the virus to new communities.”

The move will take effect on Monday and the gel delivered free to France’s public health authorities, the company said in a statement.

Russia’s President Vladimir Putin has set up a new taskforce to lead the country’s fight against the coronavirus with 63 recorded cases as of Sunday.

Moscow’s mayor, Sergei Sobyanin, will lead the group, according to Interfax news agency.

You can read all the latest updates from yesterday (March 15) here.