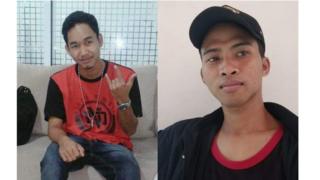 A video showing the body of a young man being callously thrown into the sea has sparked an international investigation, and shone a spotlight on the “slave-like” conditions allegedly suffered by Indonesian fishermen on board Chinese-owned vessels. This is the story of just two families, mourning sons and brothers who died trying to build a new life.

Sepri had never been to sea before, when he heard through a friend about the chance to work on a Chinese-owned fishing boat.

The promised money on offer was beyond anything the 25-year-old could dream of earning in his village on the Indonesian island of Sumatra.

“He was so enthusiastic about suddenly being able to earn such big money for us,” his sister Rika Andri Pratama remembers.

With the assurance of training and a $400 (£326) a month salary, he set sail with a group of 22 Indonesian men on the Long Xing 629 fishing vessel in February last year.

“Before he left, he borrowed some money from me,” says Rika.

“He said it would be the last time because he would come home with loads more and we could finally afford to renovate the family home.”

But Sepri never came home. No money was sent. And Rika didn’t speak to her brother again.

In early January, she received a letter. He had died at sea, his body thrown overboard into the Pacific Ocean.

“My heart was crushed when I heard he was thrown into the sea,” she says holding back tears.

She was filled with guilt. “Before our mum died, her last words were, ‘you should take care of your little brother’.”

Two other Indonesian crew members died on the Long Xing 629. Sepri and another man died within days of each other in December, after just 10 months at sea. While Ari, who was from the same village as Sepri, died in March this year, shortly before the rest of the crew were rescued.

Like Sepri, their bodies were wrapped in cloth and thrown over the side. Like Sepri’s, their families would never get the chance to say goodbye either.

A third desperately ill man, Efendi Pasaribu, would make it to shore alive – but only just.

There was a chance this could have all gone unnoticed – simply a few more deaths at sea – had the unceremonious sea burial captured on a mobile not come to light, and caused a public outcry in Indonesia.

Instead, the video sparked a renewed debate about the abuse of fishermen aboard foreign vessels in Southeast Asia.

Shockingly, the stories of life aboard the Long Xing 629 are eerily familiar, and come just five years after about 4,000 foreign fishermen, mostly from Myanmar (Burma), were rescued and freed from remote islands in Indonesia; some had been exploited in slave-like conditions for years.

At the time Indonesia vowed to fight to end unregulated fishing and the exploitation of fishermen on foreign vessels.

As the Long Xing 629’s survivors began to talk, it became clear little had changed.

‘All we could do was wash them and pray’

Fellow crew mates, who requested only to be identified by their initials, said they were often beaten and kicked. They couldn’t understand what their Chinese bosses were saying and it led to confusion and frustration.

One of the crew told BBC Indonesia his friends’ bodies all swelled up before they died.

Another said they were forced to work 18-hour days and only given fish bait to eat.

“They [the Chinese crew] drank mineral water, while we were only given poorly distilled sea water,” 20-year-old NA said.

When it became clear how sick Sepri and the others had become, NA says they pleaded with the captain to bring them to land for treatment.

After the three men died, the crew begged to keep the bodies in a cooler so their friends could be buried in line with their Islamic customs once they reached the shore.

But the captain told them that no one would want them.

“He argued that every country would reject their bodies anyway,” NA says. “All we could do was wash their bodies according to the Islamic law, pray and then throw them in to the sea.”

The captain finally agreed to move the remaining Indonesian crew members to another Chinese vessel which landed in Busan, South Korea. Efendi Pasaribu was still critically ill, but he was alive.

‘Leaving for a better future’

His mother, Kelentina Silaban, was able to video call her son while he lay in a hospital bed in Busan.

Efendi was almost unrecognisable from the healthy 21-year-old who had said goodbye to her just over a year ago.

“I said please, please just come home, we will take care of you in the village.”

Instead, her son’s body was returned to her. They were told he had died from kidney failure and pneumonia.

Before he left his village he had posted a photo of himself on social media, proudly pulling a suitcase, with the caption: “I am leaving in order to carve out a better future.”

Efendi ended up being buried close to the family home in rural Sumatra.

“We hope that our brother’s death helps uncover the slavery on foreign fishing vessels. We are hoping that this will be fully investigated,” said his brother Rohman.

Migrant rights groups are calling on the government to do much more to protect their citizens from becoming “slaves”.

The Indonesian government says the Long Xing 269 survivors – none of whom received their full salaries – were part of a group of 49 fishermen, ranging from 19 to 24, who had been forced to work in poor conditions on at least four fishing boats owned by the same Chinese company, Dalian Ocean fishing Co Ltd.

It declined to respond to the allegations when contacted by the BBC, saying it would issue a statement on its website. No response has been released.

It has said that they are now carrying out a “comprehensive investigation” in partnership with Indonesia.

In Indonesia, three men have been arrested as part of the investigation into the recruitment firms that hired the young men. They could face up to 15 years in jail if found guilty under human trafficking laws.

“We will ensure that the company has to fulfil our crews’ rights,” Foreign Minister Retno Marsudi said in a video conference.

“Based on the information from the crews, the company has violated human rights,” she added.

The Indonesian fisherman agency association (IFMA) told BBC Indonesia that there are numerous unregistered agencies hiring crews with no oversight from the government.

“There are so many requests from foreign vessels, these agencies just make the needed documents and send the men on on their way. There is no filter from the Indonesia side,” said the group’s vice president Tikno.

In response to public pressure, the government says they are now considering putting in place a six-month moratorium on Indonesian fishermen going to work on foreign vessels.

“This would allow us to have time to improve our oversight, so we can put in place a one-channel system where we have all the data we need to be able to monitor and make sure the rights of our fishermen are protected,” fisheries ministry official Zulficar Mochtar said.

Meanwhile, the recruitment firm who hired Rika’s brother, Sepri, has promised to pay her 250 million rupiah (£13,000) in compensation. But she wants answers, not just money.

“We need to know what happened on that vessel,” she said. “Let us be the last family which has to experience this.”