Hundreds of anti-government protesters have demonstrated against Prime Minister Prayuth Chan-ocha and the powerful monarchy in Bangkok on Sunday, defying once again a ban on protests.

Demonstrations have persisted despite the arrest of dozens of protesters and their leaders, the use of water cannon and shutdowns on much of Bangkok’s metro rail system in a bid to quell over three months of street action.

“We will stay until it’s over or move to another location with other activists,” said Dee, 25, one of several dozen protesters at Asok, one of the busiest interchanges in Bangkok.

Protesters at Asok put up handwritten notices on the shuttered station that read “Does licking the boots of the dictator taste good?”.

A few police officials gathered on the other side of the interchange but did not immediately intervene.

“We are committed to maintaining peace and order. In order to do so we are bound by laws, international standards and human rights,” police spokesman Kissana Phathanacharoen told a news conference. 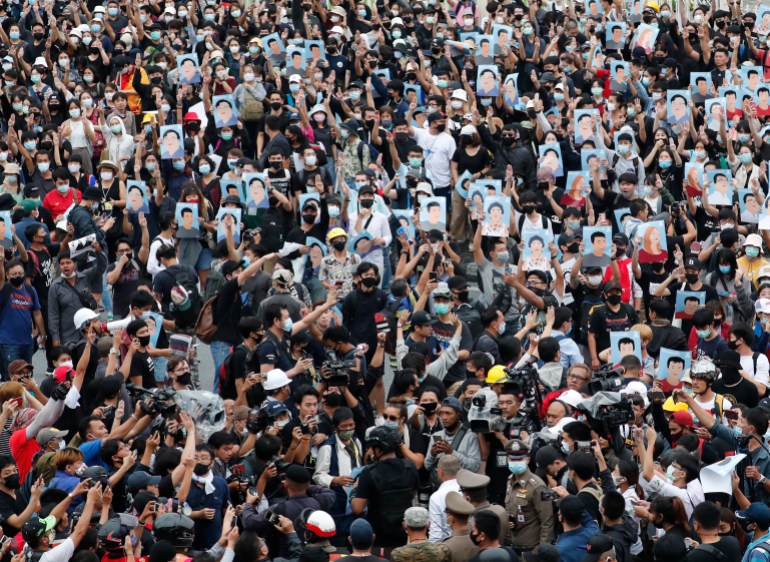 The government banned demonstrations in Bangkok on Thursday [Sakchai Lalit/AP]Protesters say Prayuth engineered last year’s election to keep the power he seized in a 2014 coup – an accusation he denies.

The demonstrations have also become more openly critical of King Maha Vajiralongkorn’s monarchy, breaking a long-standing taboo, demanding curbs to its powers despite potential jail terms of up 15 years for anyone insulting the king.

The Royal Palace has made no comment on the protests but the king has said Thailand needed people who love the country and the monarchy.

The government banned demonstrations in Bangkok on Thursday.

During demonstrations by tens of thousands of people at multiple points across Bangkok on Saturday, protesters painted a flag on the road with “Republic of Thailand” written across it. The writing was painted out overnight.

Across Thailand, demonstrations were being organised in at least 19 other provinces on Sunday.

Solidarity protests were also being held or planned in Taiwan, Denmark, Sweden, France, the United States and Canada.