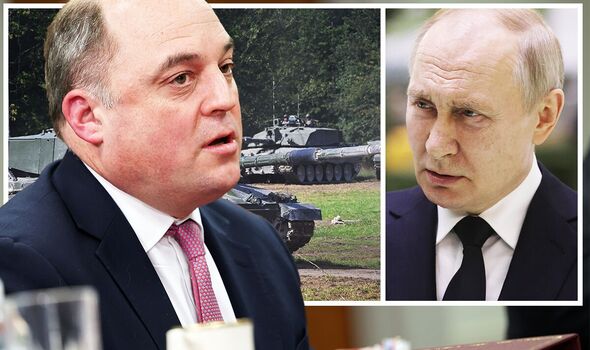 The decision to send a squadron of Challenger 2 tanks and other weapons to Ukraine means Britain is in effect involved in a “proxy war” with Russia, a former British Army officer has said. However, Stuart Crawford also warned the UK’s military power had been compromised by years of underinvestment by successive governments.

Mr Crawford, who spent 20 years in the Royal Tank Regiment, reaching the rank of Lieutenant Commander,, told Express.co.uk: “You could argue that we’re now very much involved in a proxy war, where Ukraine is fighting Russia on behalf of NATO and we should give them all the kit they need. I’m sympathetic to this view although it may be a bit naive.

“What we cannot escape is the fact that without a significant better plan for the British Army and its equipment the UK is becoming irrelevant as far as the land war is concerned, and those who argue that the RN and the RAF is where we focus our efforts may have a point.”

Following the Government’s announcement, General Sir Patrick Sanders, who as Chief of the General Staff is the head of the professional British Army, issued a memo in which he warned the decision to donate the equipment had left the nation’s military “temporarily weaker”.

Nevertheless, he also acknowledged the kit would be put to good use by Ukraine.

Mr Crawford said: “I think Sanders is right in so far as he goes, but the truth is, sadly, that the British Army is already very weak thanks to Treasury parsimony over many years and the Army’s inability to spend its budget well.

“Other countries like France seem to get much more bang for their buck.”

He added: “All the stuff is basically obsolete so we’re going to have to replace it soon anyway, but there’s nothing in the pipeline.

“Some people say that instead of giving Ukraine 14 Challenger 2 tanks we should give them all that are in our inventory (possibly 227) and buy something better ‘off the shelf’ to replace them, but when you ask where the money’s coming from you’re met with blank stares.”

Speaking on Thursday, Mr Wallace has said Nato allies should now be prepared to step up support to Ukraine to enable it to drive Russian forces out of its territory.

Speaking during a visit to Estonia, Mr Wallace told reporters the UK will be supplying a further 600 Brimstone precision-guided missiles in addition to its latest support package.

He said: “In 2023, it is time to turn the momentum that the Ukrainians have achieved in pushing back Russia into gains and making sure Russia understands that the purpose now is to push them back out of Ukraine and to restore Ukraine’s sovereignty, which is their right under international law.”

Mr Wallace was meeting defence ministers from eastern Europe ahead of a further meeting on Friday of donor nations hosted by the United States in Ramstein, Germany.

Mr Pistorius insisted German weapons systems delivered so far have proven their worth and that “we will continue in the future, together with our partners, to support Ukraine in its fight for freedom, territorial independence and sovereignty”

However, he did not mention the Leopard 2 tanks which Ukraine has long been asking for.

Especially since Britain’s announcement, Berlin has faced increasing pressure to follow suit, or at least clear the way for others – such as Poland – to deliver German-made Leopards from their own stock.