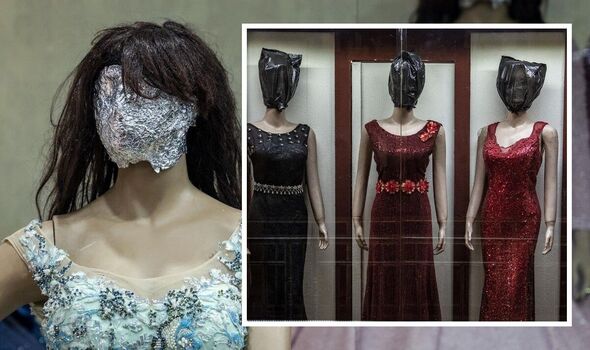 The Taliban is forcing women dress shops in Afghanistan to cloak the heads of mannequins with plastic bags or cloth as part of its tyrannical rules. Shop windows displaying the dystopian mannequins in the country’s capital Kabul have been pictured and shared online. The ruling is reportedly part of the regime’s attempt to sideline women and implement law based on a strict interpretation of Islam which forbids statues and heavily shuns the worship of false idols.

Soon after the Taliban’s seizure of power in summer 2021, they attempted to ban mannequins entirely.

The Taliban Ministry of Vice and Virtue demanded all mannequins be either removed or beheaded, local media reported.

But the order was met with resistance as shop owners complained it would stop them from displaying their clothes or damage the expensive material bodies.

The Taliban decided to amend the decision and allow owners to just cover the heads.

Early on after their seizure of power, the former enemy regime said it would be gentler to its subjects than it was in the late 1990s before the Taliban rulers were ousted by the US in 2001.

Yet, the present regime is accused of all sorts of authoritarian activity including public executions and murdering political activists.

The mannequins for some people have come to be a simple symbol of the Taliban’s attempts to censor society.

Some shops in Kabul are covering the mannequins with makeshift covers, such as plastic bags, while others are attempting to spruce up their displays with elegant materials.

In one shop, mannequins have been pictured by photographers with hoods made from the same material as the traditional Afghan dresses they sell.

“I can’t cover the mannequins’ heads with plastic or ugly things because it would make my window and shop look ugly,” said Bashir, the owner.

Another shop owner, Hakim, shaped aluminium foil over his mannequins’ heads. It adds a certain flash to his merchandise, he claimed to the Associated Press.

“I made an opportunity out of this threat and ban and did it so the mannequins are even more attractive than before,” he said.

Under the Taliban, many social gatherings are prohibited but weddings are one of the remaining opportunities.

However, the weddings are becoming less elaborate as the country’s economy has been failing over the months — plunging millions into poverty.

According to the shop owner Bashir, the result has been a halving of his sales.

He said: “Buying wedding, evening and traditional dresses is no longer a priority for people.”

“People think more about getting food and surviving.”