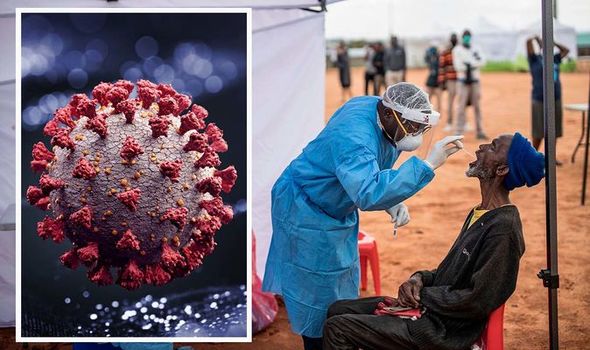 The “worst variant” top scientific advisers have ever seen has been detected in South Africa and Botswana, with cases spreading rapidly. All flights to Britain from South Africa, Namibia, Zimbabwe, Botswana, Lesotho and Eswatini are being suspended. So far no cases have been detected on British soil.

But experts are “deeply concerned” about the B.1.1.529 strain, which has more than 30 mutations in its crucial spike protein ‑ double the number seen in the Delta variant, which is currently dominant in the UK.

The spike is the target of vaccines and if its shape changes dramatically, antibodies generated by the jabs or previous infection with another strain will struggle to recognise and attack the virus.

Health Secretary Sajid Javid confirmed the travel ban last night and said ministers were determined to protect the progress the UK has already made.

He said: “The early indication we have of this variant is it may be more transmissible than the Delta variant, and the vaccines that we have may be less effective against it.

“From midday tomorrow we will be suspending all flights from six southern African countries and we will add those countries to the travel red list.

“We will be requiring anyone that arrives from those countries from 4am on Sunday to quarantine in hotels.

“If anyone arrives before then they should self-isolate at home and take a PCR test on day two and day eight.”

Anyone who arrived in the last 10 days is asked to take a test.

He added on Twitter: “Worth emphasising this is at super-low numbers right now in a region of Africa that is fairly well sampled, however it very, very much should be monitored due to that horrific spike profile.”