In the backyard of the new Greenwich Village restaurant Silver Apricot are a few tables, about a dozen chairs, plexiglass partitions to separate them, a couple of patio umbrellas and two heaters, one of them a simulacrum of a cast-iron wood stove with a window through which you can watch the embers flicker electronically. The yard is enclosed by a fence left behind by the last restaurant to occupy this address on Cornelia Street. Iron letters affixed to the pickets spell out its name, or most of it: H-O-M. The E at the end seems to have been lost.

Home and Silver Apricot share more than a fence and an address. When David Page and Barbara Shinn founded Home in 1993, they applied the sensibilities of a small, laid-back, bistrolike, chef-owned farm-to-table restaurant to American home cooking. For Mr. Page and Ms. Shinn, this meant reconfiguring the puddings and potato salads they used to eat with their families in the Midwest.

This is not too far from what Simone Tong, Silver Apricot’s chef and one of its owners, does. I’ll admit though, that the parallel may not be the first thing that strikes you when you are smearing green scallion butter on a warm, snail-shaped puff of flaky pastry that looks like a miniature raisin danish if the spiral of raisins were replaced by zha jiang, the savory brown sauce that in northern China is ladled over bowls of noodles by the millions.

The picture will probably not get much clearer when you follow this with a pliant wedge of Brie-like cheese from Vermont called Moses Sleeper and a vinegared ivory-green button of immature strawberry from a seasonal pickle plate, both suggested by the menu as companions for the scallion puffs. But home cooking, like home itself, can be a complicated notion.

Ms. Tong was born in China, in the Sichuan city of Chengdu, and lived there for the first several years of her life. For the rest of her childhood she moved around Asia — to Hong Kong, Macau, Beijing, Shenzhen and Singapore — and Australia as her parents chased dreams of entrepreneurial success. For the past decade, she has lived in New York. In 2017, after cooking in restaurants run by Wylie Dufresne, an idol of hers, she opened her own place, Little Tong Noodle Shop.

As you eat your way across the dozen or so items on Silver Apricot’s menu, it becomes clear that Ms. Tong has taken what she learned from New York’s restaurant culture and added it to what she already knew about Chinese cooking. Her cooking feels personal and autobiographical. It probably is.

At times, you may wonder whether Ms. Tong has learned the customs of her adopted city a little too well. Charred romaine with a Caesar-ish dressing, caramelized brussels sprouts, kanpachi crudo and other small-plates tropes of the past few years proceed across the menu as predictably as the corgis trotting down the palace halls in “The Crown.” 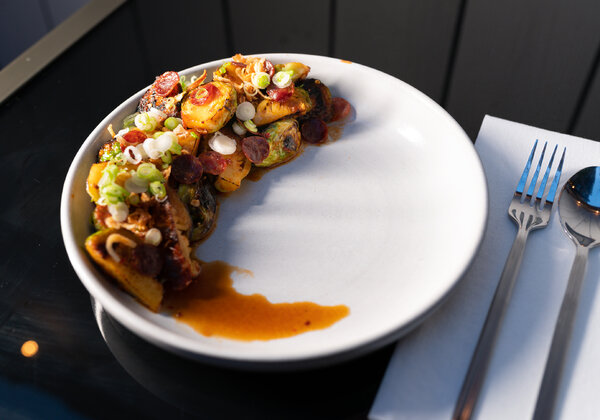 What rescues all these dishes from cliché, though, is that Ms. Tong takes them as seriously as if they were classics. She has analyzed them, broken them down and then rebuilt them with her own sensibility; because she’s grappled with what makes the original work, the Chinese elements she brings into play seem organically woven into her version.

Her take on the Caesar doesn’t rely on hosing down half a head of lettuce with creamy dressing and strafing it with grated cheese. The dressing isn’t creamy at all. It starts with oyster sauce, that classic condiment for Chinese greens. In place of anchovies, Ms. Tong stirs in a purée of fried dace, a canned fish that she used to eat with congee for breakfast in Hong Kong and Macau. As this dark and savory sauce works its way into the warm folds of lettuce, she hits the surface with sesame seeds and toasted chips of garlic. It sounds like too much. It isn’t.

Her caramelized brussels sprouts are, to begin, neither too crunchy nor too soft, and their chile-spiked maple glaze is not too sweet, and whenever you start to remember that brussels sprouts are really just undergrown cabbages you bite into one of the thin, crisp dimes of fried Chinese sausage that Ms. Tong has thrown into the pan.

There is a stab at crab Rangoon that tries too hard; although the peekytoe crab Ms. Tong employs is much better than the imitation crab that the old tiki huts used to favor, it’s not clear that turning the molten filling into a chilled, spiced cream cheese dip for fried won-ton chips really improves on the original.

Anyway, Ms. Tong has already found a higher purpose for won tons: stuffing them with whipped honeynut squash, then boiling them. On their own, they are sweet enough to pass as dessert, but nobody who has tasted the sauce Ms. Tong serves them in will commit that mistake. Made from cured duck eggs, it is somehow the perfect partner for the squash, while also tasting like a mountain cheese that was aged inside a running shoe.

Ms. Tong and Emmeline Zhao, one of her business partners, closed the original Little Tong and its twin in Midtown this year. But the restaurants contained the seeds from which their new restaurant grew. In it early days, Little Tong Noodle Shops drew lines for Ms. Tong’s bowls of mixian, the long, slender rice noodles eaten by the yard in the Chinese province of Yunnan. One patch of the menu looked in another direction, though. Called Little Eats, it was an evolving roster of side dishes in which Ms. Tong evoked Yunnan with local produce, the same stuff that would have been on sale at the Union Square Greenmarket that week.

From the stir-fried fiddleheads and spruce tips she was serving the spring that Little Tong opened, it’s not a giant leap to Silver Apricot’s stir-fry of mushrooms marinated in sesame oil and ringed by cones of Romanesco that stand up like tiny Christmas trees.

The synthesis of Chinese ideas and the Hudson Valley farm-to-table movement is the basis of almost everything Ms. Tong makes at Silver Apricot. It also plants her firmly in a New York tradition of Chinese-American chefs that extends back to Anita Lo, at least, and runs through Thomas Chen at Tuome, Joe Ng of RedFarm and Jonathan Wu of the late and lamented Fung Tu.

The original plans for Silver Apricot called for a chef’s counter and a tasting menu. But very little this year has gone as planned. When the restaurant opened, in July, it started with just takeout and delivery. A few weeks later, Ms. Tong had a baby. Even once outdoor dining began in the backyard or out on Cornelia Street, the menu kept evolving.

Two meals a month apart suggested that Ms. Tong is rapidly zeroing in on something. A smoked pork shoulder that threads together Chinese and American ideas about barbecue was unnervingly sweet in September. By October, it had shrugged off its ketchupy quality and become terrifically appealing.

Ms. Zhao, the general manager, assembled the wine list. It is a much more serious undertaking than her list at Little Tong, which more or less reached its zenith with a sake packaged in a drinking glass decorated with pandas. All the alcohol at Silver Apricot is produced in the United States, with a number of wines from Cruse, Sandhi and other leaders of the leaner, less interventionist, more ecologically gentle style that has come wafting out of California over the past decade.

Is it reading too deeply into the list to see the legacy of Ms. Shinn and Mr. Page, who eventually sold Home and became pioneers of sustainable American winemaking on the East End of Long Island? The winery they built, Shinn Estate Vineyards, isn’t on the list. Then again, they sold it some time ago. As I said, home is a complicated concept.