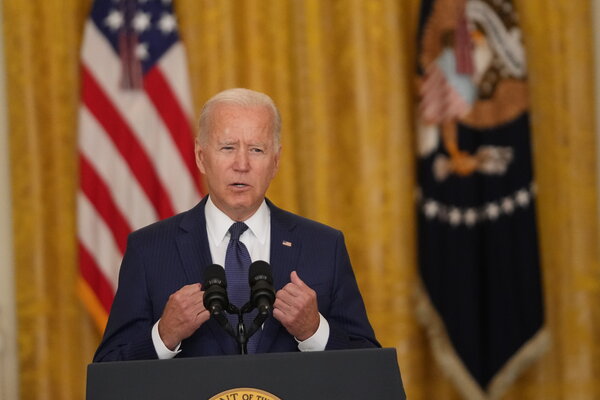 President Biden on Thursday denounced a terrorist attack at the Kabul airport that killed a dozen American service members and injured 15 more, saying that the frantic evacuation of U.S. citizens and allies from Afghanistan will continue even as he pledged to hunt down those responsible for the attacks.

“To those who carried out this attack, as well as anyone who wishes America harm, know this: We will not forgive,” the president said. “We will not forget. We will hunt you down and make you pay.”

Mr. Biden said he had asked his commanders to find ways to target ISIS-K, the Afghan affiliate of the Islamic State, which claimed responsibility for the attacks earlier in the day.

“We will respond with force of precision at our time, place, we choose in a moment of our choosing,” he said.

Mr. Biden spoke from the East Room of the White House shortly after the Pentagon confirmed the deaths of the American service members in what officials said were suicide bomber attacks.

“These American service members who gave their lives,” Mr. Biden said, were “heroes who have been engaged in a dangerous, selfless mission to save the lives of others.”

He called Thursday “a tough day” and pledged that the United States would uphold its “sacred obligation” to the families of the fallen.

The troops who died Thursday were the first American service members killed in Afghanistan since February 2020. For the U.S. military, it was a day with more deaths than any other since 2011.

Those deaths were just the kind of military loss Mr. Biden has repeatedly said he was trying to avoid by ending America’s 20-year war in the country.

Acting against the advice of his generals and overruling some of his top foreign policy advisers, Mr. Biden made the decision in April that he could not ask more American troops — or their families — to sacrifice themselves for a war that he no longer believed was in the best interests of the United States or its allies.

The president has said that he did not want to call the parents of another Marine, soldier or airman killed in action in Afghanistan.

But the rapid takeover of the country by the Taliban caught the administration off-guard and set in motion a chaotic evacuation in which 6,000 American troops attempted to secure the Kabul airport against the Taliban and terror groups. Earlier this week, Mr. Biden rejected calls from lawmakers, activists and other world leaders to extend the American presence at the airport past Aug. 31, citing the potential for terrorist attacks.

Last Friday, as he pledged to evacuate all Americans and Afghan allies who wanted to leave the country, Mr. Biden vowed that “any attack on our forces or disruption of our operations at the airport will be met with a swift and forceful response.”

It was unclear on Thursday whether a military response of any kind was already in the works, or whether the U.S. troops on the ground had the capacity to strike back while also securing the airport.

But Gen. Kenneth F. McKenzie Jr., the head of the United States Central Command, said the military would pursue those responsible for the attack. And Mr. Biden later suggested that he would not let the attack pass without a response.