VATICAN CITY (Reuters) – Pope Francis said the coronavirus had put everyone “in the same boat” as he held a dramatic, solitary prayer service in St. Peter’s Square on Friday, urging the world to see the crisis as a test of solidarity and a reminder of basic values.

“Thick darkness has gathered over our squares, our streets and our cities,” he said, speaking from the steps of St. Peter’s Basilica into an eerily empty and rainy square before delivering an extraordinary “Urbi et Orbi” (to the city and the world) blessing – something he normally does only twice a year.

“It has taken over our lives, filling everything with a deafening silence and a distressing void that stops everything as it passes by; we feel it in the air…We find ourselves afraid and lost,” he said.

The Vatican called the service “An Extraordinary Prayer in the Time of Pandemic,” a sombre echo of an announcement by Italian officials minutes earlier that the coronavirus death toll in the country had surged past 9,000.

In the United States, the total number of infections has topped 85,000, making it the world leader in confirmed cases.

Francis walked alone in the rain to a white canopy on the steps of the basilica and spoke sitting alone before a square where he normally draws tens of thousands of people but is now closed because of the pandemic.

“We have realized that we are in the same boat, all of us fragile and disoriented, but at the same time important and needed, all of us called to row together, each of us in need of comforting the other,” he said.

Francis said the virus had exposed people’s vulnerability “to those false and superfluous certainties around which we have constructed our daily schedules”.

He praised doctors, nurses, supermarket employees, cleaners, care givers, transport workers, police, and volunteers, saying they, and not the world’s rich and famous, were “writing the decisive events of our time”. 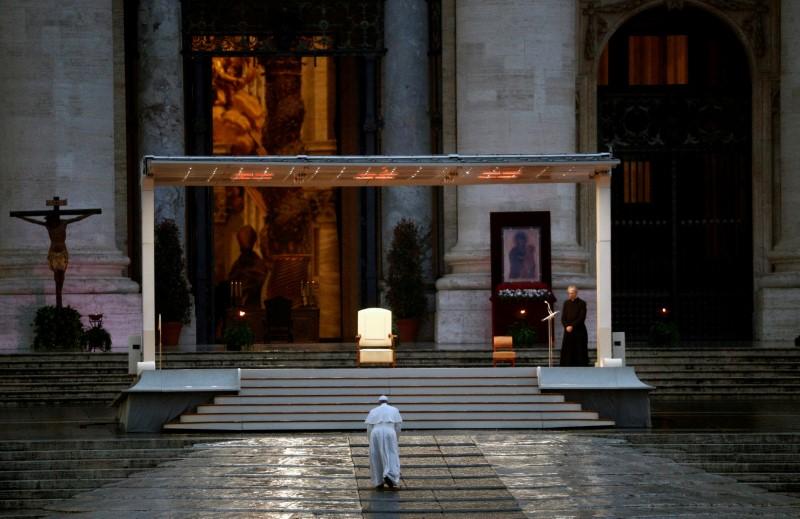 The leader of the world’s 1.3 billion Roman Catholics said God was asking everyone to “reawaken and put into practice that solidarity and hope capable of giving strength, support and meaning to these hours when everything seems to be floundering.”

He prayed before a wooden crucifix which is normally kept in a Rome church and brought to the Vatican for the special service.

According to tradition, a plague that hit Rome in 1522 began subsiding after the crucifix was taken around the streets of the Italian capital for 16 days in 1522.