SINGAPORE (Reuters) – Lockdowns and panic food buying due to the coronavirus pandemic could ignite world food inflation even though there are ample supplies of staple grains and oilseeds in key exporting nations, a senior economist at FAO and agricultural analysts said. 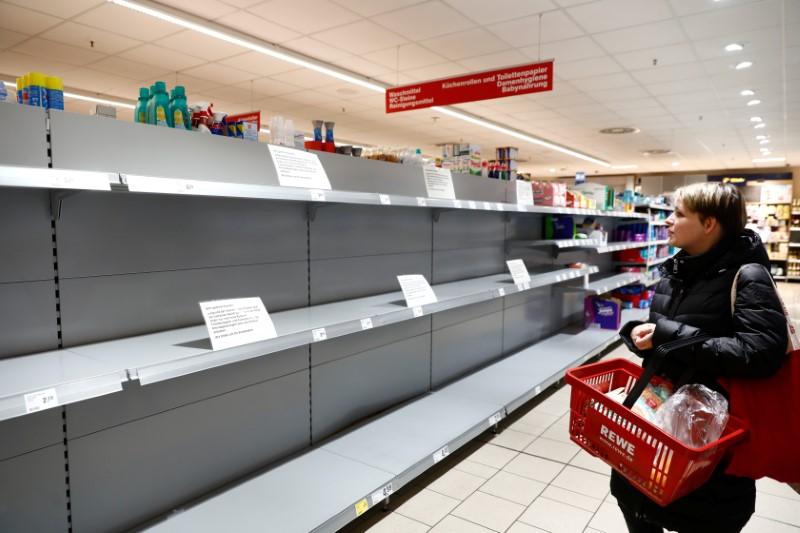 The world’s richest nations poured unprecedented aid into the global economy as coronavirus cases ballooned across Europe and the United States, with the number of deaths in Italy outstripping those in mainland China, where the virus originated.

With over 270,000 infections and more than 11,000 deaths, the epidemic has stunned the world and drawn comparisons with periods such as World War Two and the 1918 Spanish flu pandemic.

“All you need is panic buying from big importers such as millers or governments to create a crisis,” said Abdolreza Abbassian, chief economist at the United Nations’ Food and Agriculture Organization (FAO).

“It is not a supply issue, but it is a behavioral change over food security,” he told Reuters by phone from Rome, the FAO headquarters. “What if bulk buyers think they can’t get wheat or rice shipments in May or June? That is what could lead to a global food supply crisis.”

Consumers across the world from Singapore to the United States have queued at super markets in recent weeks to stock up on items ranging from rice and hand sanitizers to toilet paper.

The global benchmark Chicago wheat futures rose more than 6% this week, the biggest weekly gain in nine months, while rice prices in Thailand, the world’s 2nd largest exporter of the grain, have climbed to the highest since August 2013.

France’s grain industry is scrambling to find enough trucks and staff to keep factories and ports running as the panic buying of pasta and flour coincides with a surge in wheat exports.

Restrictions imposed by some European Union countries at their borders with other member states in response to the pandemic are also disrupting food supplies, representatives of the industry and farmers said.

However, global wheat stocks at the end of the crop marketing year in June are projected to rise to 287.14 million tonnes, up from 277.57 million tonnes a year ago, according to the U.S. Department of Agriculture (USDA) estimates.

FOOD IN THE RIGHT PLACE

Logistics are likely to be a major global issue, analysts said.

“There is about 140 million tonnes of corn that goes in ethanol in the United States and some of that can used for food as it won’t be needed for fuel, given the drop in oil prices,” said Ole Houe, director of advisory services at brokerage IKON Commodities

“The concern is having food at the right time in the right place.”

Asian buyers were inactive this week with uncertainty looming in the market.

“We are not sure about the demand. What it is going to look like in June or July?” said one Singapore-based purchasing manager at a flour milling company that has operations across Southeast Asia. “Restaurant business is down, and as a result demand is a bit soft right now.”

Asian wheat importers, including the region’s top importer Indonesia, have been taking a bulk of the cargoes from the Black Sea region amid a global oversupply.

Oil exporting nations in the Middle East, which are also net grain importers, are likely to feel more financial pain with crude losing more than 60% of its value this year.

“Net oil exporters’ capacity to buy grains has dropped given the fall in oil prices and depreciation in currencies,” said FAO’s Abbassian.

“There will be less capacity to take policy actions to boost economies.”