It is the first South Bronx setup of the Rockwell Group’s DineOut NYC systems installed across the city. 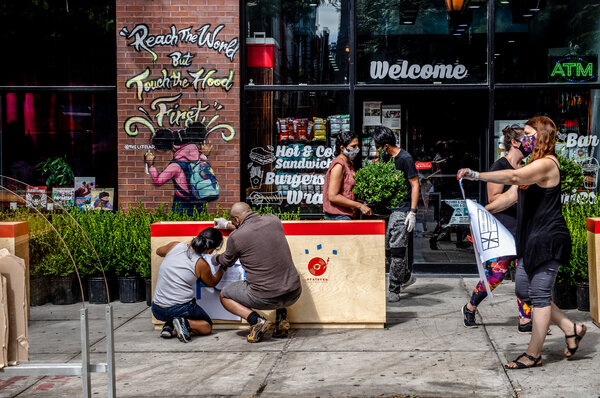 Last week, a group of volunteers helped assemble an outdoor dining area on Alexander Avenue in the Mott Haven neighborhood of the South Bronx. The setup accommodates Ceetay and Hudson Smokehouse, two restaurants on the block, and is one of the Rockwell Group’s DineOut NYC systems, installed across the city. This one is the first for the South Bronx. Desmon and Derrick Lewis, twins who started the Bronx Community Foundation to support local causes, including small businesses like restaurants, are running this Alexander Avenue project, which benefits restaurants hit hard by virus-related closings, along with Michael Brady from the Third Avenue Business Improvement District. That organization and the city’s Department of Transportation assisted. “With Covid, this is what’s needed now,” Desmon said. The street will be closed to traffic on Saturdays and Sundays. Amir Chayon, who owns Ceetay, a pan-Asian restaurant, said: “It will allow us to expand. We only had three outdoor tables before.” Hudson Smokehouse, which has a classic barbecue menu and meats by the pound, is one of few barbecue places in the borough. It has a couple of picnic tables out front, but the new setup gives it additional seating. Other restaurants on the Alexander Avenue block included in the project are Monte’s Brick Oven, Beatstro and the Lit. Bar.

The Rooftop at The NoMad

The NoMad hotel has a new restaurant upstairs. With its elegant turret, the hotel’s rooftop, previously used only for private parties, is now open to the public for breakfast, lunch and dinner. Open rain or shine, it’s tented, carpeted, well upholstered and dripping with chandeliers. The chefs, Abram Bissell and Michael Reilly, offer food that’s simple and elegant, like a $78-per-person dinner featuring roast chicken with foie gras and truffle stuffing as the centerpiece. The rest of the à la carte menu includes seasonal fare like scallop crudo with charred corn and chiles; basil gnocchi with truffles, zucchini and feta; and roast lamb with eggplant and coriander relish. All social distancing protocols are observed.

The chef Julian Medina and his partner, Louis Skibar, who own the Toloache restaurants, have broadened their interests. Their latest, a shack that sells fish by the pound for grilling or steaming, looks to New England. Plates of taquitos with lobster and Mexican-style corn on the cob coexist with New England clam chowder, steamers and a swordfish BLT. The new spot shares the kitchen with their Tacuba Cantina Mexicana in Astoria, Queens, and can seat 70 outdoors; takeout and delivery are available. The menu also nods to the neighborhood with a Greek salad and tzatziki sauce. (Opens Thursday)

This sushi restaurant with a notable omakase started with a single location on the Bowery. Then, it expanded into Midtown Manhattan, in part of the space occupied by the Greek restaurant Nerai, and, this summer, it opened in Water Mill, N.Y. Now, it is adding an outpost on the Upper West Side, in partnership with Cindy Guyer, the owner of Guyer’s, a cafe and wine bar. It will share the space, and have outdoor seating, takeout and delivery. The company also has plans to open locations in Manhasset, N.Y., and Greenwich, Conn. (Wednesday)

Tamy Rofe and Felipe Donnelly, the owners of Colonia Verde in Fort Greene, Brooklyn, have revised their takeout and delivery platform. It has a new name, and now offers a far broader array of prepared foods, ingredients, cocktails, wine and home goods on a list that goes well beyond the menu they had early in the pandemic. Delivery is available in all boroughs.

Chefs on the Move

This chef, who worked at Eleven Madison Park and Chez Ma Tante, is now in charge of the kitchen at Bathhouse Kitchen. The dining room, for outdoors only at the moment, is attached to Bathhouse, a wellness establishment in Williamsburg, Brooklyn, which opened last November.

Back in April, to help charities for immigrant restaurant workers, this fund-raising auction sold one-on-one virtual time with well-known chefs. Now, as an outreach after the disaster in Beirut, Lebanon, about 100 chefs and food personalities have been added to support Beit el Baraka, a nonpolitical nonprofit organization. It provides food and medical aid, and assists in rebuilding homes and small businesses. The list of chefs includes names like Massimo Bottura, Yves Camdeborde, Apollonia Poilâne, Anissa Helou and Rene Redzepi, for 30-minute sessions with the auction winners. The opening price for the auction is $60. It is live starting 8 a.m. Eastern time on Thursday, and will end at 6 p.m. Sunday.