A dispute over Mi’kmaq fishing rights in southwestern Nova Scotia escalated this past week into violence, destruction and eventually an angry mob attack on Indigenous-used fishing pounds.

Several hundred lobster traps have either been destroyed or seized by non-Indigenous commercial fishermen in the past month, and two Mi’kmaq fishing boats were alleged to have been set on fire by the same group.

A massive fire would erupt overnight Friday at a fishing pound used by Mi’kmaq in Central West Pubnico, burning it to the ground. 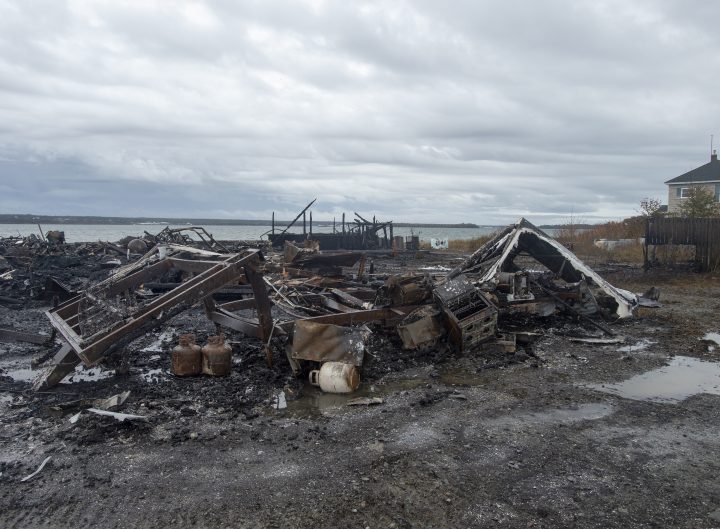 Tensions between Indigenous and non-Indigenous fishermen have come to a head over fishing rights in Nova Scotia — a dispute that has a history spanning hundreds of years.

In 1999, Canada’s Supreme Court ruled in the landmark case R. v. Marshall that several treaties signed in the 1760s granting the Mi’kmaq the right to harvest and sell fish were still valid. The over 250-year-old agreement, known as the Peace and Friendship Treaties, specified that the Nova Scotia Mi’kmaq had the right to earn a “moderate livelihood.”

The Sipekne’katik First Nation would go on to open its own fishery in St. Mary’s Bay, N.S., in September during the lobster off-season — a move that was defined by the Supreme Court ruling to be within its constitutional rights, but also a move that has hundreds of non-Indigenous commercial fishermen up in arms.

The debate has been focused on what defines a “moderate livelihood” as defined in the treaty, with the Mi’kmaq fighting against what they describe as an unspecified grey area in their rights to fish.

Why are non-Indigenous fishermen angry?

Nova Scotia’s non-Indigenous fishers have called for the Sipekne’katik’s First Nation’s fishery to be closed, saying it is illegal and a threat to the environment.

The Department of Fisheries and Oceans in Canada only allows lobster fishing during specific seasons to coordinate with moulting schedules that make them vulnerable and easily killed, but Indigenous fishers say they have a right to fish when and where they want, as defined in the treaty.

Dalhousie University Marine Affairs professor Megan Bailey told The Canadian Press in September that the scale of the First Nation’s fishery in St. Mary’s Bay isn’t the environmental threat it’s being made out to be as well, arguing that it wouldn’t likely impact the number of crustaceans in the area.

“The scale of the livelihood fishery as it exists right now with 350 traps is not a conservation concern,” Bailey said. “With 350 traps, if you multiply that by 10, I still don’t think it would be a problem.”

Data from the federal Fisheries Department showed a decreased catch in the same area where the First Nation’s fishery had opened over the last several years, but it also shows a catch decline elsewhere in the region — not tying it to previous Indigenous fishing. The coronavirus pandemic has also significantly dented Canada’s lobster exports to the Chinese market over the last several months.

In a statement Wednesday, Bay of Fundy Inshore Fishermen’s Association president Colin Sproul condemned the violence and said his association wasn’t involved with the mob’s actions on Tuesday.

“We’ve been clear that we condemn any acts of violence. Chief Sack and I are clear all the problems are incumbent on the Minister of Fisheries to solve, and she’s abdicated her authority to do that.” 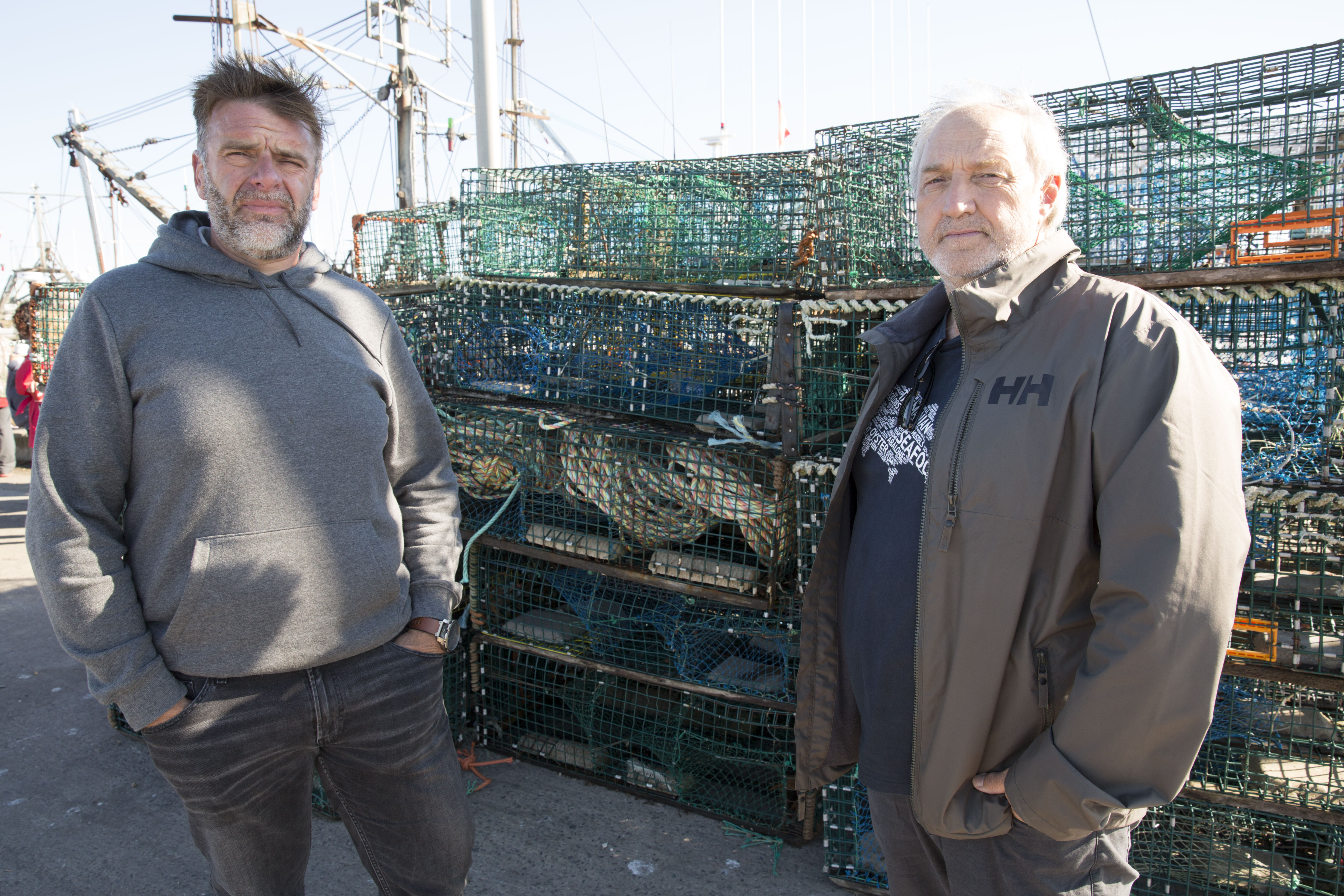 According to Indigenous law expert and Osgoode Law School professor Signa Daum Shanks, the interpretation of earning a “moderate livelihood” differs vastly in both the context and language of today compared to when the Treaties were signed hundreds of years ago.

Though several of the criticisms against the Indigenous-owned fishery define “moderate livelihood” as being no more than providing enough for oneself and their family, Shanks argues that the First Nations groups that signed the treaty hundreds of years ago did not need to sign one to provide themselves with enough food to survive, and “moderate livelihood” guaranteed not just survival, but success.

“I feel very confident that (the treaty) does not just mean an immediate family finds enough food to eat on a daily basis, and that it means that livelihood is stable and is actually successful,” Shanks said. 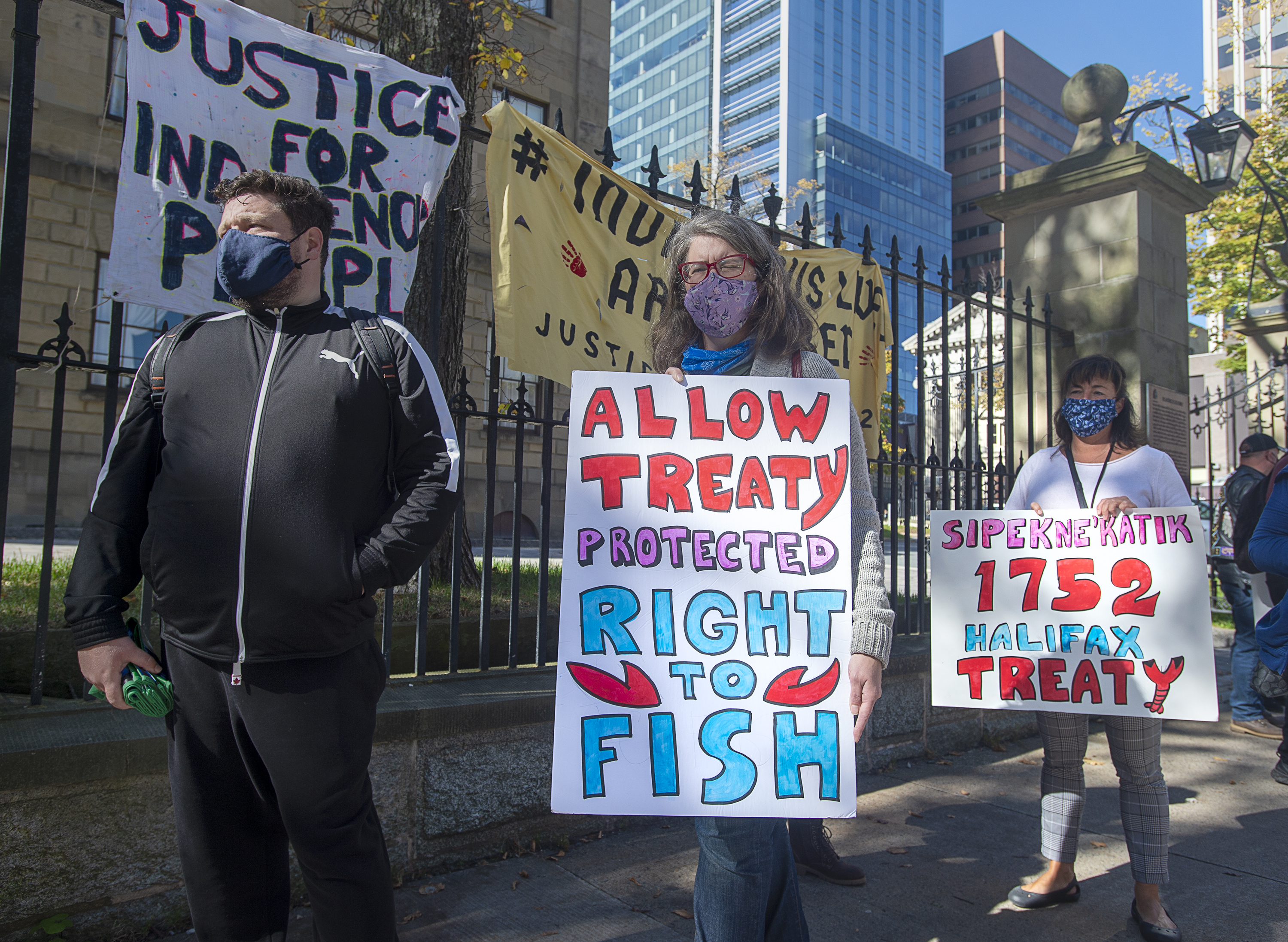 What are the police doing?

Criticized for their alleged inaction to keep Indigenous fishers and their property safe, the RCMP has come under heavy fire over the past week.

A statement from the RCMP Wednesday said that they were investigating “threats and mischief” after describing Tuesday’s violent encounters at the fishing pounds as “disturbances.”

Jason Marr, one of the Mi’kmaq fisherman forced to take cover in a fishing pound from an angry mob trying to seize his fishing haul, said that it took the RCMP two hours to arrive despite multiple 911 calls.

Marr said that after arriving, the RCMP stood by and watched the mob vandalize his car.

“They told us that the only way that this was going to come to any kind of end was if I handed over my lobsters to them,” Marr told Global News on Wednesday. Marr said he refused, and that the RCMP left for a short time before coming back.

In an interview with The West Block’s Mercedes Stephenson, Public Safety Minister Bill Blair defended the actions of the RCMP.

“If you look at the actual circumstances, where a few hundred people came into conflict, … the officers on the ground utilized their authorities and their limited resources to try to separate the combatants,” Blair said.

“But they also gathered evidence,” Blair said. “There were acts of criminality that took place there, and the police have done their job of laying the charges. In large crowd events like that, sometimes it’s very difficult to prevent every altercation and act of violence that can take place.”

A man has since been charged after an alleged assault on Sack and another man faced arson charges Sunday over a vehicle fire in the New Edinburgh fishing pound.

Friday night’s fire has also been declared suspicious, with a man facing life-threatening injuries at a Halifax hospital being deemed a person of interest.

A police statement Sunday said that the RCMP has a significant presence in the Meteghan area, and that their investigation into the lobster pound vandalism was still ongoing.

National Chief for the Assembly of First Nations Perry Bellegarde has called on the RCMP and federal government to launch a full investigation into Friday’s fire.

Despite the backlash that the police force has faced over their handling of the dispute, law professor Shanks said everyone should notice the RCMP hasn’t shut down any of the Indigenous fishing operations.

“The idea that they’re not shutting down the Indigenous fishers — I think everyone should notice this. We haven’t had moments that police have confidently walked in and stopped Indigenous fishing, that should be a sign,” Shanks said.

“There’s a nervousness there that the law enforcement doesn’t want to seem to be wrong.”

Both Trudeau and Bellegarde have called for a solution and a de-escalation to the violence.

“This is a situation that is extremely disconcerting,” Trudeau said during a press conference Friday. “That’s why we’re calling for an end to the violence and harassment that’s happening. … I understand the concerns and the conflict going on right now but we need to find a solution.”

Speaking on The West Block with Mercedes Stephenson, Bellegarde said that there is still work to be done on defining the treaty rights of Mi’kmaq lobster fishers, and that the first step needs to be de-escalation.

The question over which jurisdiction Indigenous fishing rights falls under has also arisen amid the dispute: will it fall to the federal or provincial government?

According to the 1999 Marshall ruling, the federal government does have the right to regulate Indigenous fishing, but will have to prove the restrictions necessary to protect conservation efforts.

Nova Scotia Premier Stephen McNeil has also urged the federal government to define the legality of harvesting within the context of “moderate livelihood” fishing. 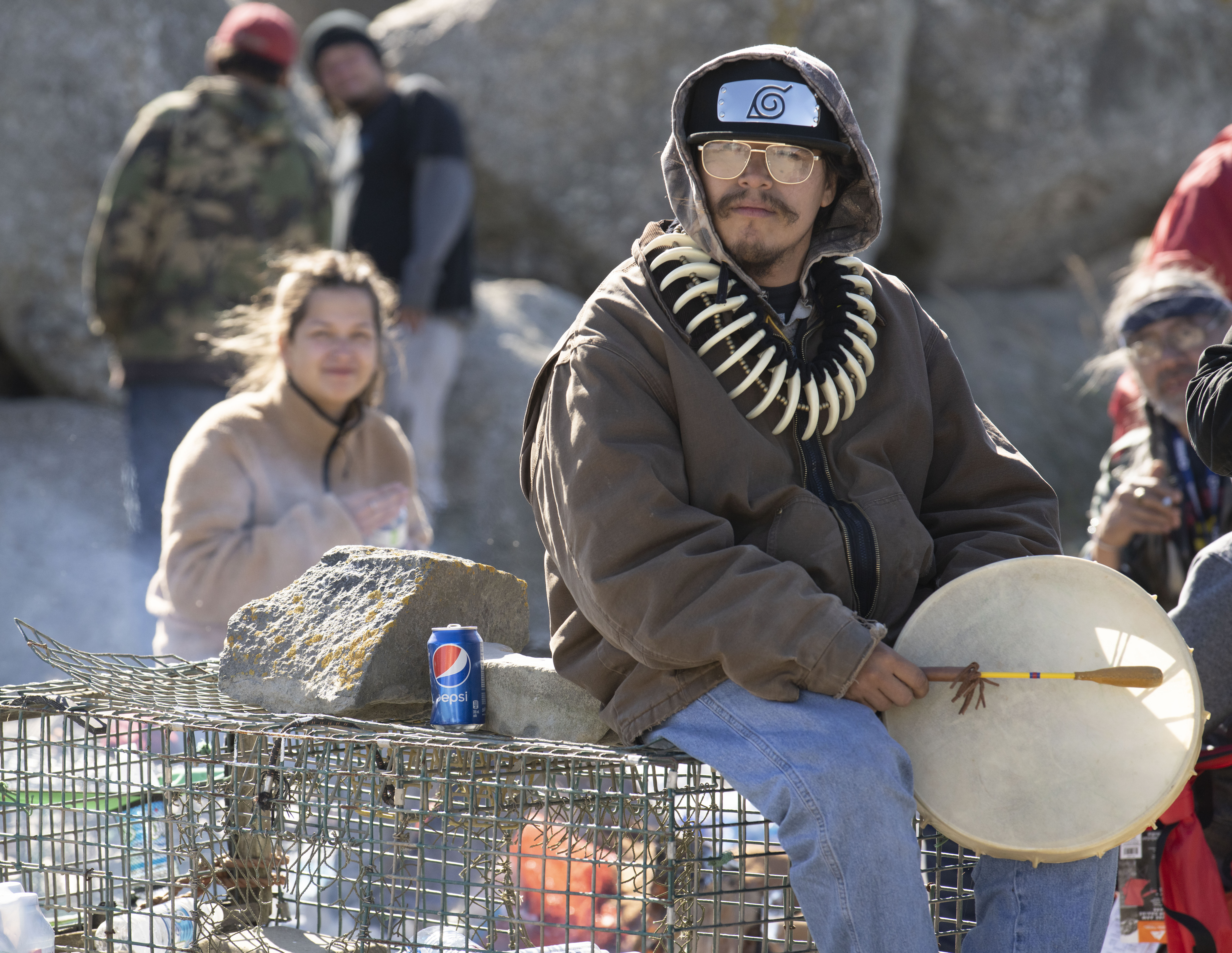 According to McNeil, the province is looking to find a facilitator to bring both sides together to resolve the dispute.

Further dialogue and mediation is also an effort Shanks believes to be a next step forward, but she thinks more should be coming out of the province.

According to her, treaty implementation has been under the provincial jurisdiction for years, including the idea of figuring out federal fishing agreements.

“I don’t buy that the province’s hands are tied, and that maybe that idea of thinking about the provinces as being as participants in the conversation in a more active way would help imagine how law enforcement functions.”

Speaking to the violence and destruction of property over the last several weeks, Shanks said the legal justification to commit violent acts isn’t a statement the non-Indigenous fishers can make themselves — it’s a statement that should be presented in court.

“Something is not illegal until the courts say it is, so they may be disappointed in how slow it goes,” Shanks said. “They should be working on being as organized as possible to make the legal analysis of it happen.”

“I guess what I find curious, if not frustrating, about it, is that they’re so regularly using the idea of legality at their convenience, like these violent acts are about the other side’s illegality, but they don’t want their violent acts to be evaluated under law, and you can’t cut it both ways.”