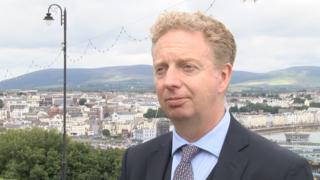 The Isle of Man’s education minister has accused an exam board of wrongfully downgrading students’ results after exams were cancelled in the wake of the coronavirus pandemic.

Alex Allinson said he was “incredibly angry” that some predicted marks had been lowered by up to three grades.

The education department would help schools to appeal, he added.

Cambridge International said it would “consider each appeal carefully and make changes where needed”.

Headteacher of Ramsey Grammar School Annette Baker said she was “devastated” by the grades awarded.

The school has appealed the results after 90% of A2 maths and physics, and 83% of chemistry marks at the school were altered, along with 92% of English language IGCSE grades, she said.

Schools also had “considerable concerns” over the downgrading of results in subjects assessed by UK exam boards, she added.

Ballakermeen High School’s head of sixth form Richard Karran said students had seen “a lot more Es” than predicted, leading to a “doubling” of the number of students going through the university clearing system.

A spokeswoman for Cambridge International said predicted grades had been “higher than historical school performance data for the last three years”.

“To address this we have standardised grades using historic centre performance data and the performance of the global cohort in each syllabus this year,” she added.

A-Level student Emma Mellows said although the lowering of her grades was “a bit upsetting”, she was “very happy” to have been offered a place at university.

Fellow student Rory Donegan said while he was pleased to have achieved the results he needed, being downgraded was a “concern” as it could impact on a future internship placement.

“While I’m happy with my A-Level grades the university might be a bit concerned by what’s happened because I’ve come so far down from my predictions,” he said.