Felipe Massa opened up about the condition of Michael Schumacher nearly six years after his horror skiing accident and said the F1 ace was “going through a difficult phase” and his situation was “not easy”. In a video call, his former Ferrari teammate, said :”I know how he’s doing. “His situation is not easy. He is in a difficult phase, but we have to respect his family.

“They don’t want to spread information, so who am I to do it? “

The German legend’s health has been a closely guarded secret since he suffered catastrophic brain injuries in a skiing accident in 2013.

Massa is one of the few people who have been allowed to visit the German driver in Switzerland. 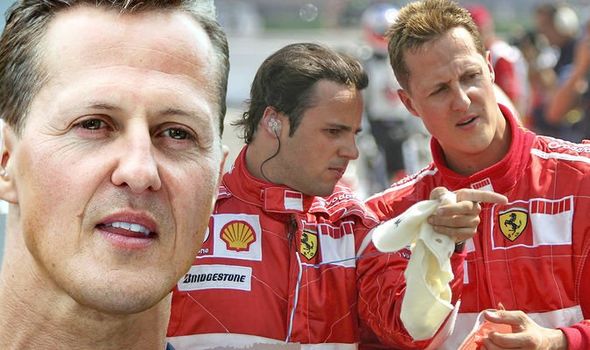 Schumacher and Massa drove together for the Scuderia in 2006 and since then both have shared a close relationship.

Schumacher visited the Brazilian after his serious accident where he was put in to a coma in 2007 at the Hungarian Grand Prix.

During the emotional interview, Massa said he dreamed and prayed he would see Schumacher on the track again.

He added: “My relationship with him has always been very close.

“I dream and pray every day that he gets better and that he can show up on the track again – especially since his son is driving now. I pray that one day it will happen.”

Schumacher’s career saw him amass a record seven world titles and the most amount of wins (91) ever for a driver.

The poster depicts the 49-year-old driving his 2000 red Ferrari to victory on his way to his first title.