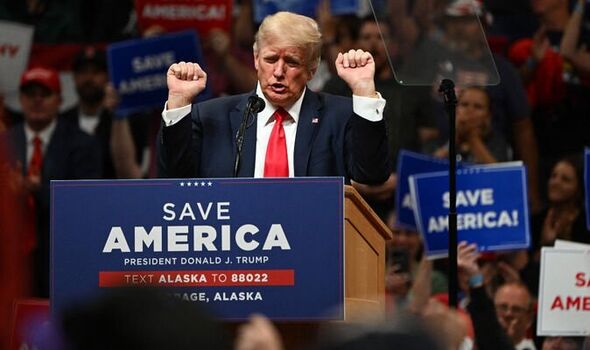 Mr Trump stood on stage in the Last Frontier state as he was joined by former Vice President candidate Sarah Palin and other prominent Republicans.

The 45th President used much of his 90-minute speech to assist Ms Palin in her bid to enter the House of Representatives as a GOP Senator next month following the death of Don Young.

However, standing behind a ‘Save America’ lectern, Mr Trump hinted he could stand in a third successive general election in two years’ time.

He also continued to peddle the unfounded claim the 2020 US Presidential Election was rigged.

“I did much better the second time than I did first, believe it or not.

“And now with the approval of the great people of Alaska, we may have to do it again.”

The crowd in Anchorage roared with delight at the suggestion Mr Trump could make a return to the White House.

The ex-POTUS made the trip to Alaska just one day after addressing supporters in Las Vegas, Nevada.