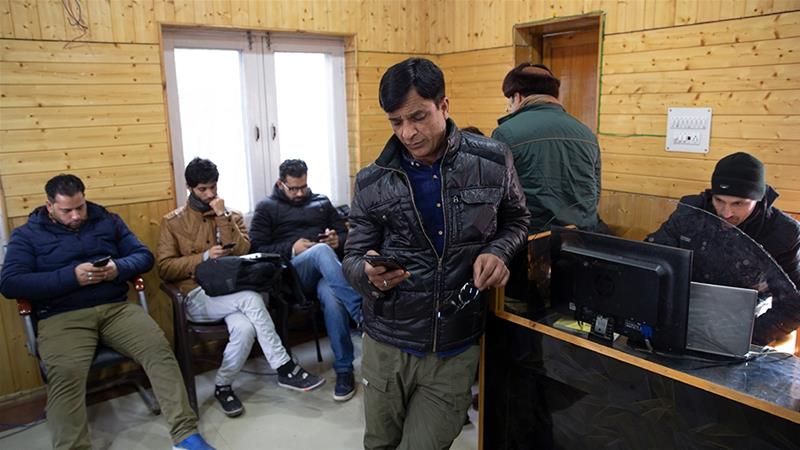 “Journalism in Jammu and Kashmir is under a dramatic state of repression,” Ravi R Prasad, director of advocacy at the Vienna-based IPI, said in a statement.

“The state is using a mix of harassment, intimidation, surveillance and online information control to silence critical voices and force journalists to resort to self-censorship.”

Naseer Ganai, who has been working as a journalist in Kashmir for more than 10 years, told Al Jazeera that he was called by the counterinsurgency forces on February 9 and interrogated for four hours.

“They called me and took my phone, my laptop. They told me they want to check where do statements or mails for stories come. I don’t know what they did with my phone and laptop,” he said.

“They kept me interrogating for hours. This means in this place even my phone or laptop is not my own. They can call anytime and take it. There is no privacy to work for journalists here, this is mentally very disturbing.”

Ganai said the incident was “completely shocking” for him and he was asked to give them “every detail”.

The report is the latest in a series of damning criticisms of the Indian government’s months-long security and communication lockdown of Kashmir by international watchdogs.

Committee to Protect Journalists (CPJ) in its statement last month urged the authorities to stop harassment of journalists in the region.

“In these critical times in Jammu and Kashmir, police must stop harassing and questioning journalists and allow them to do their jobs without fear of reprisal,” said Aliya Iftikhar, CPJ’s senior Asia researcher in New York last month.

“The Indian government should lift all remaining internet restrictions and let journalists get back to work.”

IPI asked the Indian government to restore full internet and social media access in the disputed territory where slow-speed internet service was restored earlier this month after nearly seven months of blackout.

“Working without internet or only with restricted internet has severely hindered journalists from reporting about developments in remote parts of Kashmir … Journalists have been forced to rely on press briefs issued once or twice a week by the state government, without possibilities to verify the stories,” the report said.

The authorities in Kashmir will review the restoration of internet services on March 26 whether its speed should be restricted to 2G.

Before the government decision to strip the region’s limited autonomy on August 5, New Delhi rushed tens of thousands of additional troops to the Himalayan region, which already hosts nearly half a million Indian forces.

India says its soldiers have been deployed to quell an armed rebellion which erupted in 1989.

Journalists, many of whom requested anonymity, told IPI that it has become a common practice for the police to ask them to reveal their sources.

“Press freedom in Jammu and Kashmir is under serious threat from the security forces and the regional administration since August [2019],” the IPI statement said.

The Kashmir Press Club, a local body of journalists, said there have been at least 10 incidents of harassment and intimidation faced by journalists at the hands of security forces.

Masrat Zahra, a multimedia journalist based in Kashmir, goes to a government-run media facilitation centre every day, travelling 8km (5 miles), from where she accesses the internet to file pictures and videos.

“For me, the curbs continue and there are hundreds like me. The situation continues to be a challenge,” she said.

“There is some relaxation like phone and internet works now but it’s very slow. I can’t do any work. It’s frustrating. I still have to travel to send an email for my work. It’s still tough,” she said.

Moazam Muhammad, the vice president of Kashmir Press Club, also said there has been a “little relief” after the restoration of the internet. “The low speed on mobile phones is hampering journalists to work from home,” he said.

“There are still cases of journalists being harassed by the authorities, their equipment is being snatched and they are being asked to collect them from police stations. We witnessed two such cases recently,” he said.

“We have taken up the cases with the government but there has been no action or response from them.”

A senior government official, who spoke on condition of anonymity, dismissed the reports of harassment as “just propaganda and nothing new”. “The contents of the report are baseless, based on falsehood to hoodwink global opinion about the press freedom,” the official told Al Jazeera.

Ashok Kaul, a spokesman of the ruling Bharatiya Janata Party in Jammu and Kashmir region, told Al Jazeera that “they were not getting any such reports” about problems faced by journalists.

“If journalists have any issues they should bring to the notice of concerned authorities. The local papers are progressing day by day and they are working smoothly. However, if any report is found to be disturbing peace they [journalists] will be questioned.”