JERUSALEM (Reuters) – Palestinian worshippers scuffled with Israeli police in East Jerusalem on Friday as crowds headed to Al-Aqsa Mosque to pray, amid a partial lockdown imposed to prevent the spread of the coronavirus. 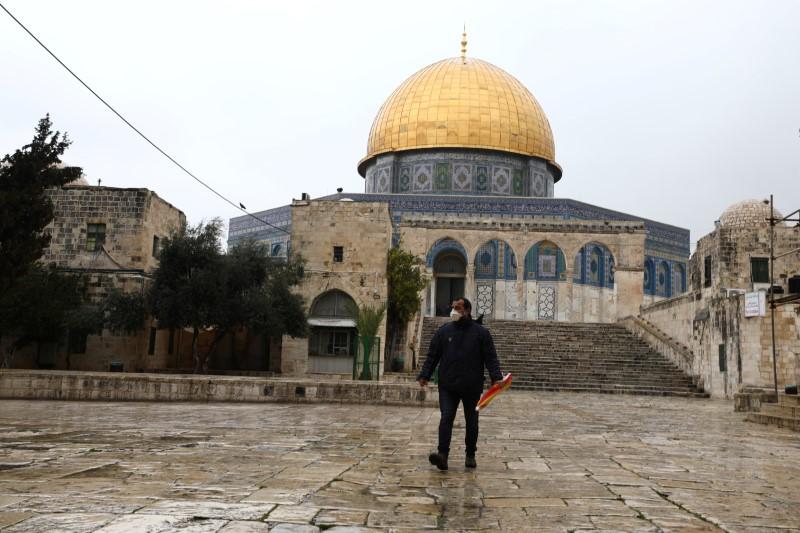 Police in riot gear and wearing face masks put barricades up outside Damascus Gate and other entrances to the walled Old City ahead of Friday noon prayers, and checked identity papers to limit the numbers attending.

The crowds were much lower than usual, witnesses said, with only a few hundred in attendance. Some who were refused access prayed in the rain-sodden streets outside the walls, and there were light scuffles as police used tear gas and horses to disperse a crowd.

Al-Aqsa Mosque and the adjacent Dome of the Rock were closed by Muslim authorities last week, in a move to protect worshippers at Islam’s third holiest site.

But the clerics permitted prayers on the huge open area around the two shrines, which sit atop the sacred compound known to Muslims worldwide as al-Haram al-Sharif, or The Noble Sanctuary, and to Jews as Har ha-Bayit, or Temple Mount.

However on Thursday Israeli Prime Minister Benjamin Netanyahu tightened a national stay-at-home policy, saying police would enforce restrictions. The guidelines said that no more than 10 people should gather in one place.

Superintendent Micky Rosenfeld, a police spokesman, said health measures were being taken in all neighborhoods, including the Old City.

“With the ongoing spread of the coronavirus it is critical not to have public gatherings and absolutely necessary to keep at a distance of at least 2 meters from one another,” he said.

The Israeli government has threatened to impose lockdown orders unless people observed the instructions – pointing a finger at Israel’s Arab minority and ultra-Orthodox Jewish community.

Israel’s Chief Rabbinate said earlier this month that Jewish worshippers should not come to the Western Wall or gather en masse there. The wall, built by Herod the Great, is a sacred place of prayer for Jews.

Some turned up to pray on Friday, but the area was much quieter than usual, like much of the city center that is normally crowded with tourists.

Israeli authorities say 705 people have tested positive for coronavirus. Of them, 10 are in serious condition.

Palestinian officials say there have been 48 cases detected in the West Bank, 17 of whom have recovered.