Tropical Storm Earl is now under watch for a potential development into a hurricane while the National Oceanic and Atmospheric Administration (NOAA) warned Tropical Storm Danielle could once again be upgraded to hurricane status in the coming hours. Puerto Rico and the Leewards Islands have been warned of strengthening waves and potential flooding as Earl passes them by overnight into Sunday. Expectations are the two storms will stay mostly off-land but The Weather Channel warned Earl will remain under watch amid potential strengthening past Labour Day.

The broadcaster reported: “We’re approaching the peak of hurricane season now that we’re into the month of September, and we do have a couple of things in the Atlantic.

“We have Tropical Storm Earl, which only just formed last night. Tropical Storm Danielle, which was our first hurricane of the season, has been downgraded yet again.

“And now we’ve got a couple of systems to watch over in the easter Pacific side as well including a tropical storm affecting Southern California.”

They continued: “We begin in the Caribbean where we’re looking at some dry air showing up in our water vapour imagery, but it looks like Earl found a way to develop. 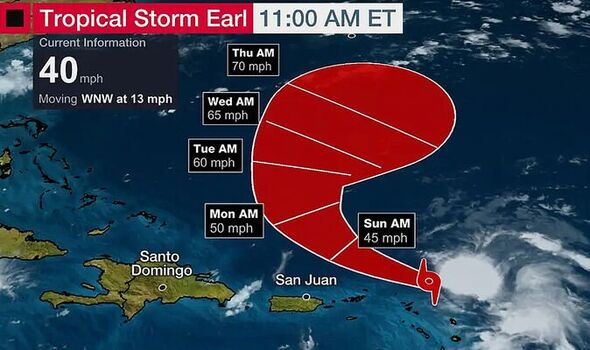 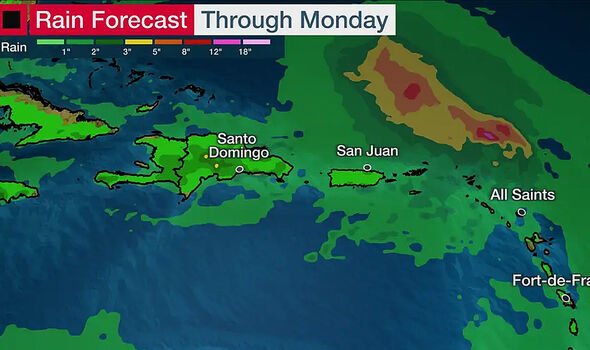 “Just a little bit of cocoon and moisture out there, avoiding some of the stronger wind shears that it’s definitely to its north and west.

“We’re going to have to watch it very closely for impact not just in the Caribbean islands but, after that, where does Earl go?

“It’s pretty close to the Leewards Islands, those outer rain bands rushing up against the islands. Also, Puerto Rico, waves will be increasing here as well.

“As it moves just north of Puerto Rico doing some strengthening as we get beyond Labour Day into Tuesday and Wednesday.”

Hurricane Danielle forms in the Atlantic

The NOAA issued an advisory for “limited flash, urban and small stream flooding” in the Leeward Islands, US and the British Virgin Islands, and Puerto Rico.

They added: “Rapid rises on rivers and mudslides in areas of steep terrain are possible in Puerto Rico.

“Maximum sustained winds are near 40 mph (65 km/h) with higher gusts. Slow strengthening is possible during the next few days.

“Tropical-storm-force winds extend outward up to 175 miles (280 km), mainly to the north and east of the center. 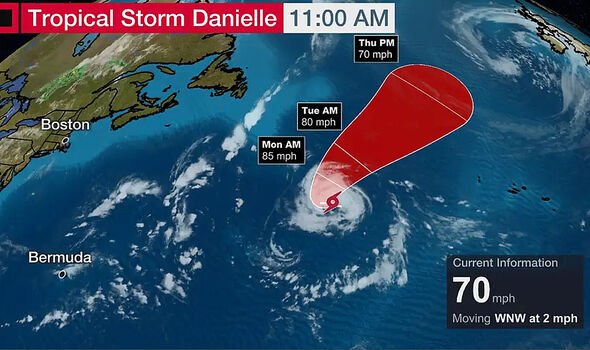 Danielle became the first hurricane of the season to develop in The Atlantic Basin but was swiftly downgraded as it moved eastwards.

According to records, 2022 is only the seventh year the first hurricane of the season developed in September.