As government ramps up coronavirus response, residents and health professionals raise alarm over a major outbreak. 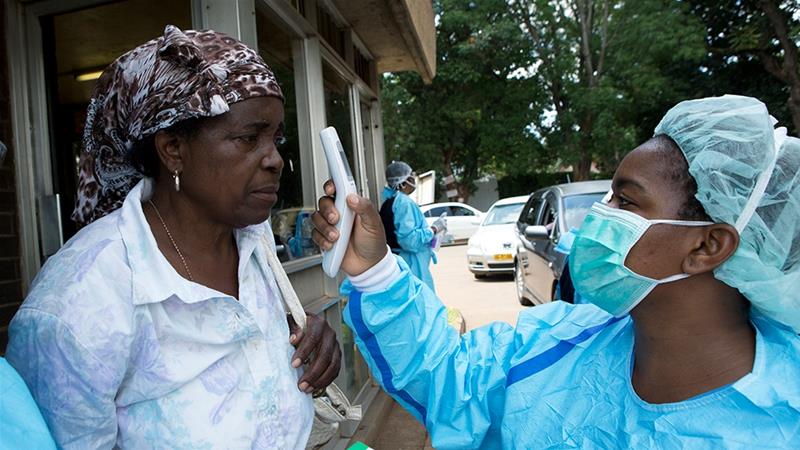 Harare, Zimbabwe – Perched comfortably on a makeshift stool, Wilbert Mutaurwa attends to a customer at the corner of a shopping centre in Zimbabwe’s capital, Harare.

“Today, I decided to come to work because my church said we should not congregate because of corona[virus],” the 37-year-old airtime vendor said on Sunday, less than two days after health authorities in the country reported the first case of COVID-19, the highly infectious disease caused by the virus.

Since then, two more infections have been confirmed in Harare.

“We will all die because we don’t have proper medical facilities,” Mutaurwa said, citing the dismal state of the healthcare sector in a country plagued by a deepening economic crisis.

Indeed, the threat of a major COVID-19 outbreak could not have come at a worse time for Zimbabwe. Medicines are in short supply and depleted state coffers mean that the government is unable to purchase sufficient supplies for state-run medical facilities.

At the same time, crippling electricity shortages have become the norm, with citizens enduring as much as 17 hours of daily power outages.

The financial crisis, meanwhile, has seen professionals struggle to make ends meet, facing a devastating mix of a rapidly weakening currency (the Zimbabwe dollar is trading at 1:42 against the US dollar); skyrocketing inflation, which in February was measured at 540 percent; and stagnant salaries.

Late in 2019, Hilal Elver, the UN’s special rapporteur on the right to food, warned that the country is on the brink of “man-made starvation”, with some eight million people facing food insecurity.

Against this grim background, doctors and nurses last year launched a strike demanding better wages. Medical practitioners want their salaries indexed in US dollars to keep pace with inflation as the Zimbabwe dollar continues to lose value.

Doctors only resumed work in January this year after Zimbabwean telecommunications billionaire Strive Masiyiwa offered to pay salaries of the country’s 2,000 doctors for three months in the local currency if they returned to their duties.

Masiyiwa’s offer did not cover the nurses, who are only reporting for duty twice a week.

Citing Zimbabwe’s healthcare woes and echoing the fears of Mutaurwa and many others in the country,  Jabulani Gwenzi, a 57-year old Harare resident, said he believed a COVID-19 infection could be a “death” sentence.

“Right now, HIV positive people cannot access their antiretroviral drugs. In light of this, I don’t know how we can survive corona[virus].”

About 14 percent of Zimbabwe’s 14 million population is living with HIV.

“We are deeply concerned about the impact COVID-19 could have in Zimbabwe,” Mnangagwa said, as he launched the country’s COVID-19 preparedness policy.

“This situation is a real threat to the citizens of our mother country.”

As part of measures to contain the spread of the highly infectious disease, Mnangagwa has declared a state of national disaster and banned all public gatherings of more than 100 people for 60 days. Some of the banned gatherings include church services, weddings and all international sporting fixtures.

Among other measures, Mnangagwa’s government  has also ordered the closure of schools and designated three hospitals as quarantine facilities for COVID-19.

However, some expressed concerns about Zimbabwe’s state of preparedness to tackle a COVID-19 outbreak.

Health minister Obadiah Moyo has said the government has stepped up response measures at all ports of entry.

“We have adequate thermo scanners at our borders. As far as isolation is concerned, we make sure that all visitors are well checked and should there be symptoms, we will put them in quarantine. The best quarantine facility is in Victoria Falls, where there are tourists,” Moyo told members of parliament last month.

As of last week, an estimated 8,000 travellers had been screened for coronavirus at major ports of entry, according to health authorities.

Last month, Moyo said his ministry had identified equipment for testing of the coronavirus.

“The equipment is there, but what is missing are test kits so that we do not continue to send samples to South Africa,” he said.

Norman Matara, secretary of the Zimbabwe Association of Doctors for Human Rights, last Friday expressed dissatisfaction over the country’s COVID-19 preparedness, saying only 16 people had been tested to date.

In recent days, many Zimbabweans have used social media to call on authorities to step up its response.

In a post on Facebook, Vimbai Chakanetsa said the government needed to come up with extraordinary measures to deal with what he described as “extraordinary circumstances”.

“The current response to the coronavirus pandemic by the Zimbabwean government is too weak and shall lead this nation to dire consequences,” he wrote.

“Why on Earth are we still opening our borders with such weak control measures?”

Many countries worldwide have shut their borders to travellers in a bid to contain the spread of the disease, which has caused more than 14,000 deaths globally, according to data compiled by John Hopkins University. Some 99,000 of the 341,000 people who contracted the disease worldwide have recovered.

Rairo Gunguwo, who spoke to Al Jazeera via a messaging service, also said the government must do more to fight the coronavirus.

“We have been watching the horrible effects of COVID-19 in Europe and recently South Africa among other countries,” Gungowo said, calling for large-scale sanitisation of busy areas.

“We had much time to prepare and put in place measures for prevention and containment in Zimbabwe.”