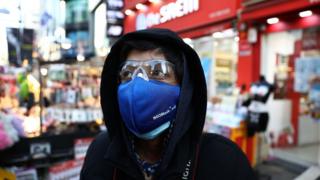 South Korea has recorded its first day with no locally transmitted cases of Covid-19 since the middle of February.

It did record four new cases, but all were people coming from abroad, who were diagnosed and isolated on arrival.

They brought the country’s total number of confirmed cases to 10,765.

It’s a major milestone for a country that was once among the world’s biggest virus hotspots, but it comes after significant efforts – and remarkably, without a total lockdown.

“This is the strength of South Korea and its people,” President Moon Jae-in said on Thursday.

How did it do it?

South Korea saw a huge spike in the number of infections in February, after a religious group in the city of Daegu was identified as a virus cluster.

One member of the Shincheonji Church of Jesus was found to have infected dozens of others and thousands of cases were later linked back to the church.

The government reacted by launching a massive testing campaign.

As part of making tests freely available, drive-through clinics were set up throughout the country. Here, drivers are seen undergoing testing from their cars in the capital, Seoul.

The huge number of tests meant South Korea’s infection numbers grew quickly, but also that authorities were able early on to effectively find those who were infected, isolate and treat them.

South Korea also started aggressively contact tracing, finding people who had interacted with a confirmed case, isolating and testing them too.

When someone tested positive, authorities would send out an alert to those living or working nearby. People soon got used to receiving a flurry of these messages from authorities.

Cases linked to the Shincheonji cluster had at one point accounted for about half of South Korea’s total.

All churches in South Korea were ordered shut as officials fought to rein in public gatherings.

Today, churches have reopened, but worshippers are still required to keep a distance and keep their masks on.

And those rules also applied to these students, seen here sitting for their exams last week – making sure there’s no chance of contact (and even less of a chance of cheating).

Lunch is no longer a time for socialising and catching up with friends at one company cafeteria in South Korea. Protective screens have been put up and staggered lunch breaks introduced to keep people apart.

However, it’s not clear if all restaurants and cafes are adhering to such strict rules – though South Koreans have still been told to practice social distancing.

But for many, life appears to be going back to a new normal. People are out and about on the streets, but having to get their temperature taken before being let into events or buildings.

This woman is one of the many that attended a ceremony in South Korea last week, marking the birth of Buddha.

But it was an election earlier this month that really tested South Korea’s capacity to contain the virus.

Thousands lined up in front of polling stations on 15 April to vote in the National Assembly elections. They were given plastic gloves, told to stand apart, and temperatures were checked before voters entered polling stations.

There were fears that the vote could cause a spike in the number of cases, but two weeks on, it’s clear this hasn’t happened. And the ruling party won a resounding victory, indicating public support for their handing of the crisis.

Subway stations have been meticulously cleaned and wiped down with disinfection sprays so commuters can breathe easy.

Baseball – which is extremely popular in South Korea – is still going on, though there are no spectators in sight. Fans are not allowed, umpires have been told to wear gloves and even high-fives have been banned.

School pupils have now gone back to school, but only virtually. Classrooms remain empty even and lessons are now conducted online.

“We are in fact opening a new road,” Prime Minister Chung Sye-kyun said when classes resumed in mid-April.

“We will aim to make sure remote learning goes well but ultimately we’ll do our best to stabilise the Covid-19 pandemic so our children can go to school.”

The strict measures South Korea has taken across different aspects of daily life have allowed it to bring the outbreak under control.

Anyone arriving in the country now has to undergo 14 days of quarantine, so its unlikely new cases will be brought in.

But officials are cautious. The Korean Centre for Disease Control has said that until there is a vaccine it is inevitable that this pandemic will return.