KUALA LUMPUR (Reuters) – Worshippers slept in packed tents outside the golden-domed mosque, waking before dawn to kneel on rows of prayer mats laid out in its cavernous central hall. All the while, the coronavirus was passing unnoticed among the guests. 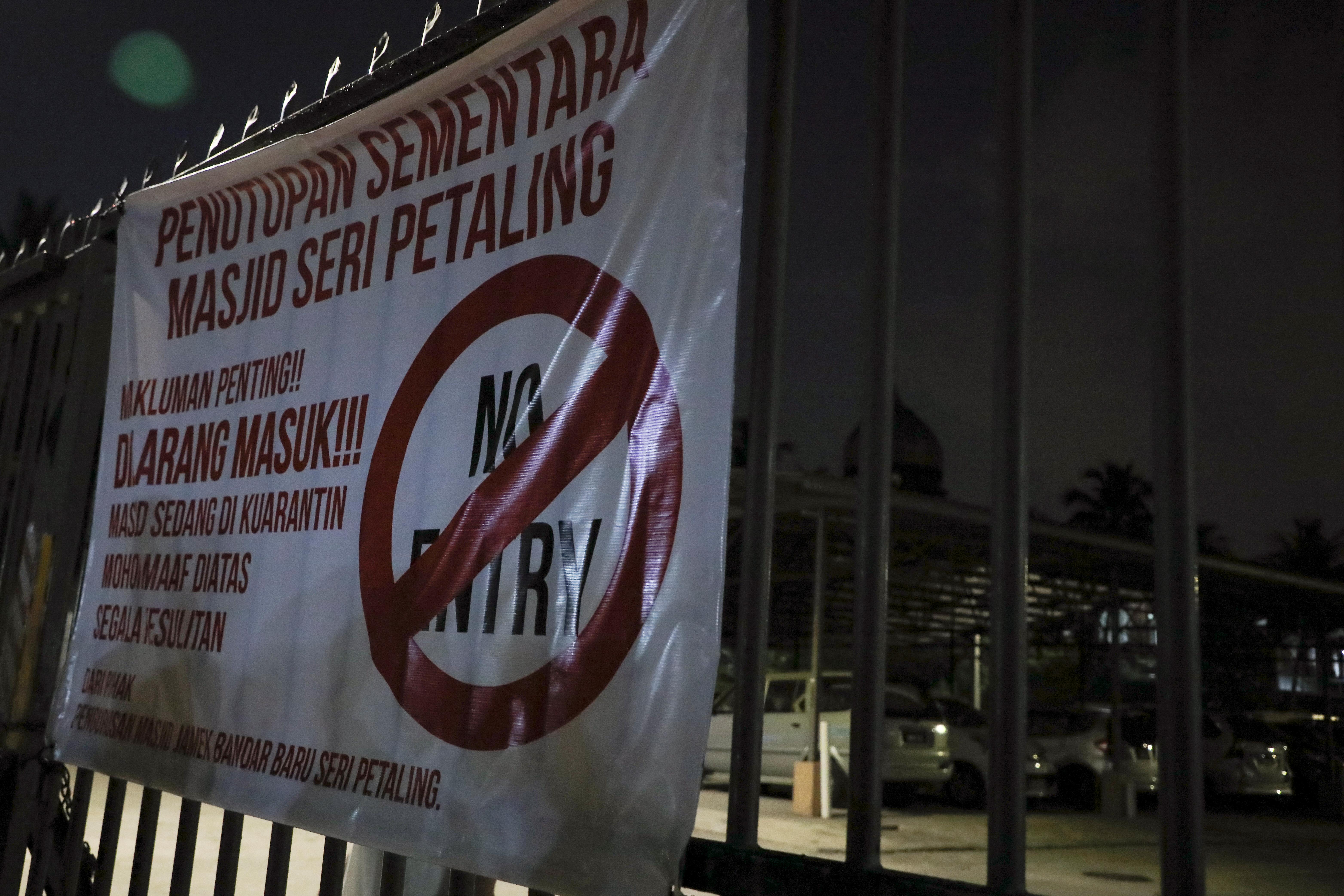 The Muslim gathering held at the end of last month at a sprawling mosque complex on the outskirts of Malaysia’s capital Kuala Lumpur has emerged as a source of hundreds of new coronavirus infections spanning Southeast Asia.

A 34-year-old Malaysian man who attended the event died on Tuesday, Malaysia’s Minister of Health Adham Baba said, the first death linked to the Feb. 27-March 1 event at the Sri Petaling mosque compound.

Out of Malaysia’s 673 confirmed coronavirus cases, nearly two-thirds are linked to the four-day meeting, Adham said. It is not clear who brought the virus there in the first place.

Reuters spoke to six attendees and reviewed pictures and posts on social media, and the accounts and evidence showed several ways in which the outbreak could have spread.

The hosts, the Islamic missionary movement Tablighi Jama’at, which traces its roots back to India a century ago, on Monday suspended missionary activities but did not comment directly on the Malaysian event.

Tablighi Jama’at did not respond to a request for further comment. The mosque where the event was held was closed on Tuesday and a guest said he was one of dozens of worshippers still there under quarantine. Calls to the mosque went unanswered.

Malaysia plans to shut its borders, restrict internal movement and close schools, universities and most businesses, as it seeks to control its coronavirus outbreak. All mosques will be closed for two weeks.

“I was very surprised actually that it went ahead,” said Surachet Wae-asae, a former Thai lawmaker who attended the event but has since tested negative for the coronavirus after returning home.

“But in Malaysia God is very important. The belief is strong.”

The prime minister’s office and the health ministry declined to comment further about the event.

The packed gathering, where guests had to take shuttle buses to sleep at other venues, was attended by nationals from dozens of countries, including Canada, Nigeria, India and Australia, according to an attendee list posted on social media.

There were also citizens of China and South Korea – two countries with high rates of coronavirus infections.

Social media posts show hundreds of worshippers praying shoulder-to-shoulder inside the mosque, while some guests posted selfies as they shared food.

It was not clear how many guests were residents of Malaysia, but cases linked to the gathering are popping up daily across Southeast Asia.

“We sat close to each other,” a 30-year-old Cambodian man who attended the event told Reuters from a hospital in Cambodia’s Battambang province, where he was being treated after testing positive for the coronavirus on Monday.

“Holding hands at the religious ceremony was done with people of many countries. When I met people, I held hands, it was normal. I don’t know who I was infected by,” he said, asking not to be named due to fears of discrimination at his mosque.

None of the event leaders talked about washing hands, the coronavirus or health precautions during the event, but most guests washed their hands regularly, two guests said. Washing hands among other parts of the body is part of Muslim worship.

Another attendee from Cambodia said guests from different countries shared plates when meals were served.

Only half of the Malaysian participants who attended have come forward for testing, the health minister has said, raising fears that the outbreak from the mosque could be more far-reaching.

Brunei has confirmed 50 cases linked to the mosque gathering, out of a total of 56 cases. Singapore has announced five linked to the event, Cambodia 13 and Thailand at least two.

Vietnam, the Philippines and Indonesia, which had nearly 700 of its citizens attend, are all investigating.

That a large religious pilgrimage should have gone ahead, at a time when the epidemic had killed 2,700 people and was spreading from Italy to Iran, has drawn criticism.

More than 182,000 people have now been infected by the coronavirus globally and 7,165 have died.

“That Tablighi event in KL (Kuala Lumpur) … could also cause a regional spike and it was irresponsible for the authorities to have allowed it to be held,” Singapore diplomat Bilahari Kausikan said on his Facebook page.

It is not the only religious event to spread the virus on a mass scale. Thousands of cases in South Korea are linked to services of the Shincheonji Church of Jesus in the city of Daegu.

At the time of the event in Malaysia, the country was in political turmoil. The country had a one-man government in the 94-year-old interim prime minister Mahathir Mohamad, who had quit and was temporarily re-appointed the same day.

Prime Minister Muhyiddin Yassin was sworn in as the new premier on March 1 and banned mass gatherings on March 13. Prior to that, there was only advice from the health ministry to minimize public exposure.

Some attendees defended the event, saying that at the time the situation in Malaysia – which had announced 25 known cases by Feb. 28 – was not severe.

“We were not worried then as the COVID-19 situation at the time appeared under control,” said Khuzaifah Kamazlan, a 34-year-old religious teacher based in Kuala Lumpur who attended the event but has tested negative for the coronavirus.

Khuzaifah said some of the worshippers who attended the event have since refused to be tested for coronavirus, preferring to rely on God to protect them.

Karim, a 44-year-old Malaysian who attended the gathering and was later tested positive for coronavirus, says the government should have canceled the event.

“We are a bit disappointed that this outbreak has been blamed entirely on us. That view is unfair. There was no ban on our gathering,” said Karim, who gave only his first name.

“Now I am concerned because I am positive. Please pray for me.”