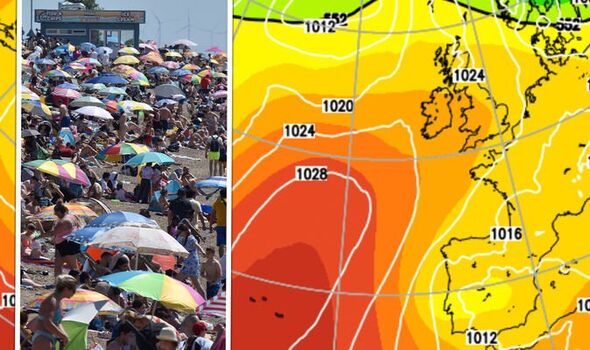 Sunshine and warmth will build across southern Britain as high pressure sweeps warmth in from the Atlantic Azores Islands.

Scotland and the north, however, will fall to the mercy of chilly northerly gusts pushing temperatures to freezing.

Rain will be kept at bay until Friday when showers breakthrough bringing a soggy end to the week.

Jim Dale, the meteorologist for British Weather Services, said: “It is going to be pleasantly warm in the south for most of this week as the nose of an Azores high comes in and sits over the country keeping frontal systems away.”

“Temperatures could hit 20C or 21C across southern parts of the country thanks to this sub-tropical airmass.”

“Towards the end of the week, high pressure will weaken allowing frontal systems to come in bringing more unsettled conditions.”

Scotland and the north of Britain will get off to a chilly start before enjoying a taste of the warmth ahead of the weekend, he said.

He added: “Northern Britain will get a cooler influence to start the week, but as high pressure builds, eventually some of the warmer air will push temperatures up.”

Britain will start the week as a nation divided with Scotland facing frosts while temperatures start to creep up across the rest of the country.

The mercury will nudge the 20C-mark in the sunshine tomorrow, according to the Met Office.

Meteorologist Sarah Kent said: “It is turning chilly across northern Scotland and there could be a touch of frost here where there are any cloud breaks, but it will be milder elsewhere.

“Tuesday starts on a cloudy note with showery outbreaks in places, early fog in the southwest will lift away with some sunny spells but these will trigger some scattered showers in the afternoon.”

“It will be cool in northern and eastern areas but where there is some sunshine in the south and west temperatures will peak at around 18C.”

Bookies are equally divided on what the weather holds, slashing odds on every possibility through the coming weeks.

Coral is offering 2-1 from 5-1 on rainfall while Ladbrokes has halved the odds on the hottest May on record.

Ladbrokes spokesman Alex Apati said: “We’re strapping in for a record-breaking month of sunshine ahead.”

Coral’s Harry Aitkenhead added: “The Bank Holiday weather hasn’t quite been the barbecue fare that Brits had hoped for and we have now slashed the odds on this month ending up as the UK’s wettest May since records began.”

Arctic air threatens to return to northern Britain bringing an unseasonable chill across the region.

Weathertrending meteorologist John Hammond said: “There’s an outside chance we may well endure a fresh wave of Arctic air, raising the possibility of unwelcome overnight frost, especially across northern areas.”

High pressure will stretch across the country by Thursday allowing warmth to spread nationwide, according to some forecasters.

On Friday, unsettled conditions from the Atlantic threaten to break through triggering showers largely across the southeast.

However, in the meantime, parts of the country can look forward to 21C (70F) highs.

“Temperatures will reach 19C to 21C, although it will be cooler, cloudier and breezier for Scotland with scattered showers, particularly towards western coasts of Scotland.

“By Friday, the Azores ridge retreats south to allow Atlantic fronts to move in from the west, bringing cloudier skies and some outbreaks of showery rain southeast across many parts.”