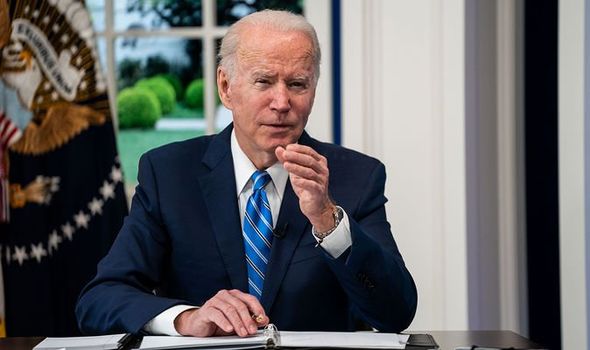 When asked how Mr Biden’s presidency made them feel, respondents to a CBS poll released Sunday said they were unsatisfied with his handling of the Covid-19 pandemic, the economy and inflation.  Another 49 percent said they were “disappointed” with his performance over the past year, and 40 percent said his presidency made them “nervous” compared to just 25 percent who said they felt “calm” and “relaxed” respectively.

The majority of voters said that the Democrat leader was not paying enough attention to the issues that matter, particularly the economy and inflation, which rose to its highest point in 40 years in December according to the Bureau of Labor Statistics.

Respondents felt he was “distracted” and not focusing on things they cared about.

Of the approximately 2000 Americans polled, 70 percent said they disapproved of the president’s handling of spiralling inflation in the country, although 63 percent said their opinion would improve if Mr Biden took action to tackle record price rises seen across a range of industries.

As the omicron variant continues to surge across the US causing record Covid infections, 64 percent of respondents said they thought Mr Biden’s handling of the pandemic was “going badly”, with the majority blaming this on confusing messaging around the virus.

Despite the president’s continued focus on passing his Build Back Better set of social reforms, only 24 percent of respondents said their opinion of him would improve if the bill gets passed.

The figures follow a series of setbacks for Mr Biden in recent weeks that have sparked new questions over the fate of his presidency.

The Build Back Better Bill was scuppered last month when Democratic senator Joe Manchin said he would not support the flagship reforms in a major blow to Mr Biden, though the two said they would continue discussing the legislation.

Elsewhere, the Supreme Court shot down Mr Biden’s plan to force private companies with more than 100 employees to bring in vaccine mandates, although a bill making vaccines mandatory for healthcare workers was allowed to continue.

Planned reforms to voting rights, which were another key aspect of the Biden administration’s policy, were also sent awry last Thursday when Senator Manchin and fellow Democrat Senator Krysten Sinema said they would not support them.

Mr Biden’s overall approval rating stands at 44 percent, according to the CBS poll, which is still higher than that of his predecessor Donald Trump which stood at 37 percent at the same time in his presidency. Former President Barack Obama’s rating came in higher at 50 percent.

The CBS poll is the latest in a long line of polls that show the president’s popularity plummeting in recent months.

After hitting a high of 62 percent in March, Mr Biden’s ratings took a major dip in October soon after the chaotic withdrawal of US troops from Afghanistan.

Mr Biden’s sinking favour with the American people has prompted worries about the Democratic party’s fate in upcoming midterm elections later this year, which could see the party lose their majorities in both the House of Representatives and the Senate.

During a press briefing on Friday, the president did not address the recent disappointments but instead praised the $1tn infrastructure bill signed in November.

“There’s a lot of talk about disappointments and things we haven’t gotten done. We’re going to get a lot of them done, I might add,” Mr Biden said. “But this [infrastructure] is something we did get done, and it’s of enormous consequence to the country.”

The CBS poll showed that Americans’ attitude towards the leader could reflect how they view their country’s direction more generally, with 75 percent of respondents saying the US is doing “somewhat” or “very badly” at the moment.

As Mr Biden prepares to mark his first year in office on Thursday, only 26 percent of respondents said they thought things in America were going well.

The majority of those polled said their view of him would improve if he prioritised their most pressing problems, particularly getting record-high inflation rates under control.