(Reuters) – Major sports events around the world which have been hit by the coronavirus outbreak: 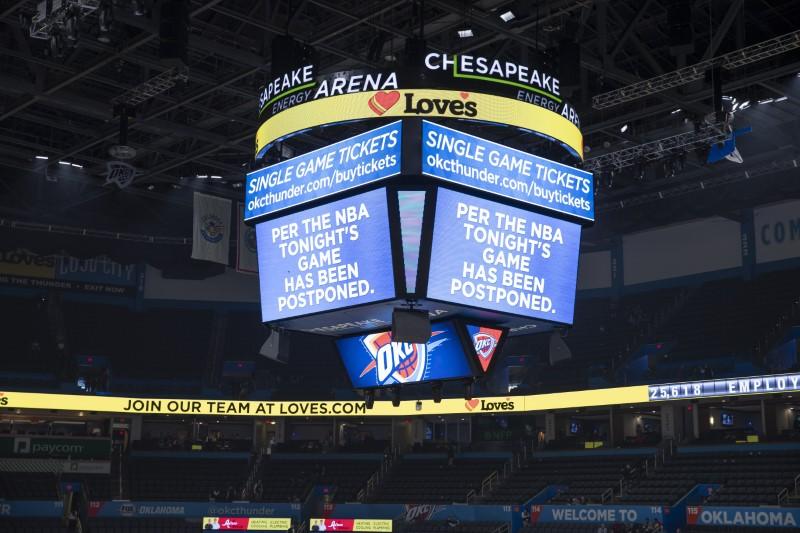 ** The Tokyo 2020 Olympics torch lighting ceremony in ancient Olympia was held without spectators.

** The NBA has suspended its season until further notice.

** The NHL has suspended its season

** Seattle Mariners will not play their MLB home games in March.

** The World Athletics Indoor Championships, scheduled for Nanjing from March 13-15, have been postponed until next year.

** The Paris and Barcelona marathons have been postponed.

** All soccer matches in Spain’s top two divisions have been postponed for two weeks.

** Major League Soccer has suspended its season until further notice.

** The friendly match between Netherlands and Spain, scheduled for March 29 in Amsterdam, has been canceled.

** All soccer in the Netherlands has been suspended until the end of March, which means the Dutch national team have canceled their Euros warm-up matches — against United States on March 26 and Spain three days later.

** FIFA and the Asian Football Confederation have agreed to postpone Asian World Cup qualifying matches in March and June.

** Europa League: Manchester United v LASK and Wolverhampton Wanderers v Olympiakos Piraeus, both on March 12, will be played without fans.

** UEFA has postponed two ties after one side, Spain’s Getafe, refused to travel to Italy and another, AS Roma, said they had been denied permission to travel to Spain.

** Premier League: Manchester City’s match against Arsenal on March 11 was postponed because players from the London club had contact with the owner of Greek side Olympiakos, who has contracted the virus.

Players in the Premier League are forgoing pre-match handshakes.

** Ligue 1: RC Strasbourg v PSG was postponed. All Ligue 1 and Ligue 2 games until April 15 will be played without fans.

** New seasons in the Chinese, Japanese and South Korean professional leagues have been postponed.

** Brazil’s first two qualifying games for the 2022 World Cup — against Bolivia (March 27) and Peru (March 31) — have been postponed, a source told Reuters.

** A four-team international event in Doha featuring Croatia, Portugal, Belgium and Switzerland from March 26-30 has been canceled.

** An international friendly between Germany and Italy (March 31) in Nuremberg will take place without fans.

** Tickets are not being sold for the Euro 2020 qualifying playoff semi-finals between Bulgaria and Hungary and Bosnia and Northern Ireland.

** Asian Champions League: Matches involving Chinese clubs Guangzhou Evergrande, Shanghai Shenhua and Shanghai SIPG have been postponed. The start of the knockout rounds was moved back to September.

** Euroleague Basketball has suspended all 2019-20 EuroLeague, EuroCup and Euroleague Next Generation Tournament games until further notice.

** The Chinese Grand Prix in Shanghai has been postponed.

** The Bahrain Grand Prix will go ahead on March 22 without fans.

** The McLaren Racing team withdrew from the Australian Grand Prix after a team member tested positive and the race is set to be called off.

** Four rounds of the MotoGP season in Qatar, Thailand, Texas and Argentina will not go ahead as scheduled.

** The ATP suspended its professional men’s tennis tour for six weeks after the Miami Open (March 23-April 5) was suspended by the Miami-Dade County mayor.

Impacted events include the Clay Court Championships in Houston, the Grand Prix Hassan II in Marrakech, the Monte-Carlo Masters, the Barcelona Open and the Hungarian Open.

** The International Tennis Federation (ITF) postponed all of its events until April 20.

** The BNP Paribas Open in Indian Wells, the Xi’an Open and Kunming Open were all canceled.

** The women’s Six Nations game between Scotland and France scheduled was postponed after a home player tested positive for coronavirus.

** The Singapore and Hong Kong legs of the World Rugby Sevens Series have been postponed from April to October.

** Rugby Europe has announced a suspension of all its matches and tournaments from March 13-April 15.

** The world championships in Busan, South Korea, have been pushed back provisionally from March to June.

** The World Cup finals in Cortina, Italy (March 18-22) were canceled last week while the last three women’s races in Are, Sweden, (March 12-14) were also canceled. Italy’s Federica Brignone was declared the overall winner.

** The women’s world ice hockey championships in Canada have been canceled.

** Speed skating world championships in Seoul have been postponed until at least October.

** The March 16-22 world figure skating championships in Montreal have been canceled.

** Olympic boxing qualifiers for Asia and Oceania were moved to Jordan from China.

** The PGA Tour has banned spectators from attending tournaments until after April 5.

** The Honda LPGA Thailand event and the HSBC Women’s World Championship in Singapore have been canceled.

** The Indian Open, scheduled to take place from March 19-22 in New Delhi, the Maybank Championship in Kuala Lumpur and the China Open have all been postponed.

** The final two stages of the UAE Tour were canceled after two Italian participants tested positive.

** The AFL game between St Kilda Saints and Port Adelaide Power scheduled for May 31 in China has been moved to Melbourne.

** The final qualification tournament for the Olympics in Taiwan has been put back from April to June 17-21.

** Japan’s professional league has postponed the start of the new season.

** The International Judo Federation canceled all Olympic qualification events through to the end of April.

** The India Open, scheduled for March 24-29 in New Delhi, will go ahead without spectators.

** The All-Around World Cup in Stuttgart, scheduled on March 20-22, has been canceled.