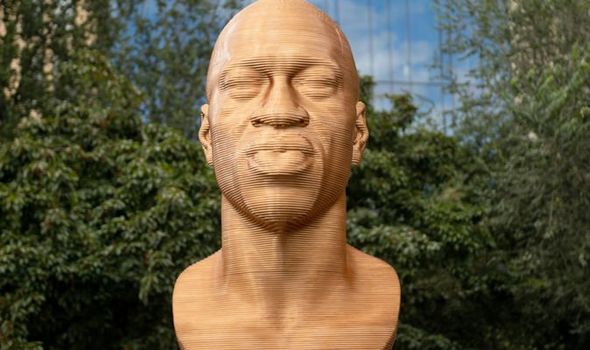 A sculpture of George Floyd in Union Square, New York City, has been daubed with blue paint just 48 hours after it was unveiled on Thursday. Police say the incident was captured on camera and footage shows an unidentified male skateboarder mixing paint before splashing it on the bronze sculpture and fleeing.

Police have not released footage of the incident but say an investigation is underway.

The statue was unveiled with two other sculptures of John Lewis and Breonna Taylor, who were also killed by police officers.

They were each almost six feet tall and weighed around 1,000 pounds.

Police say the other statues were left unharmed.

Eric Adams, borough president of Brooklyn and retired New York police officer, said in a statement: “I am disgusted by the vandalism of George Floyd’s statue in Union Square.

“The trauma of his tragic death should not be compounded by the trauma of seeing his memorial defaced.”

Confront Art, the group behind the exhibition, said people spent hours cleaning the paint off by hand and with toothbrushes, NBC reports.

The “See Injustice” exhibition will remain in Union Square until October 30. The sculptures will then be moved to different cities across the US.

Prior to its unveiling in Union Square, the statue of George Floyd had been on display in Brooklyn.

In June, just five days after its unveiling, it was vandalised with black paint and marked with the phrase “Patriot Front”- a white supremacist group.