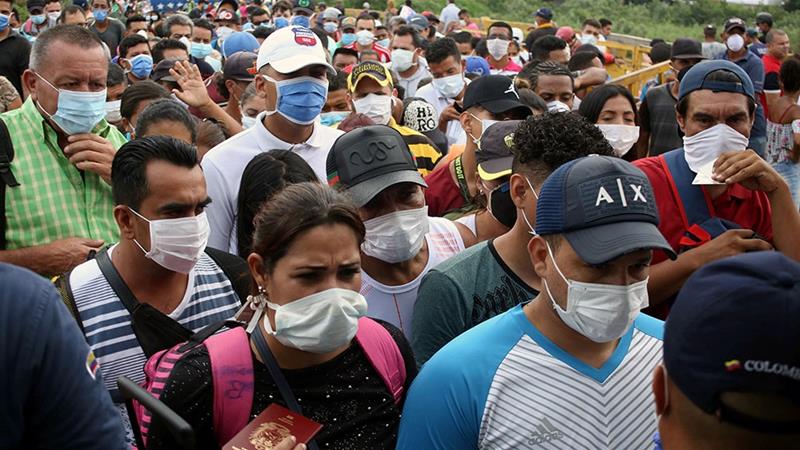 Bogota, Colombia – Cesar Castillo and his partner begged for help on the street of a wealthy Bogota, Colombia, neighbourhood with their eight-month-old son.

Castillo, 26, left Venezuela three months ago, in search of opportunities as his economically crippled homeland continues to suffer a lack of medical and food supplies.

The last time he saw a doctor was in 2018, when he injured his leg in a motorbike accident in his hometown of Maracay, a 40-minute drive from the Venezuelan capital Caracas. His injury became infected in hospital, and the necessary antibiotics were not available. His leg was amputated.

“If it (coronavirus) arrives in Venezuela, it’s going to be horrible. So many will die,” he said while balancing on his crutches in the middle of the busy shopping street, recalling his hospital trauma. “There’s no medicine, people literally die.”

Castillo’s fears deepened this week when officials announced two people inside Venezuela had tested positive for the disease. The cases sparked concern not just in Venezuela, but also in Colombia where millions of Venezuelans have fled to in recent years.

Colombia has 22 confirmed cases of the coronavirus, which has now been labelled by the World Health Organization as a pandemic. The government of President Ivan Duque announced late Friday that non-nationals will be barred from entering the country from March 16 if they have been in Europe or Asia over the past two weeks. The government also announced the closure of the border with Venezuela, prompting fears of what such measures may mean for those who rely on medicine, medical supplies and other goods from Colombia. Venezuela also slammed the decision as “an act of gross irresponsibility”.

Venezuela’s public health system has been crippled for years owing to the country’s failing economy. Basic medicine is hard to come by, and treatment for serious illnesses like cancer, diabetes and HIV is even more scant.

More than 4.8 million people have fled Venezuela since 2015 and over 1.7 million now reside in Colombia, according to the United Nation’s most recent figures. Most Venezuelan migrants arriving in Colombia are from poor, working-class backgrounds and, like Castillo, arrive with little to no resources and serious medical conditions. 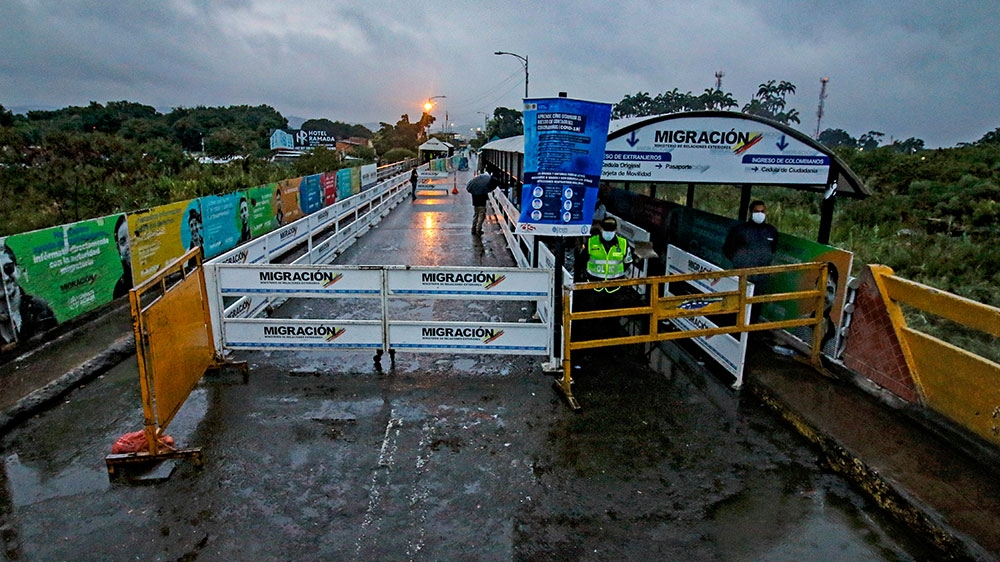 Even before the announcement of the closure, those who work along the border feared for what the situation would look like in both Venezuela and Colombia.

“If coronavirus arrives on a large scale, the Colombian health system would be severely affected. Venezuelan migrants, especially those who are not registered in the Colombian social system, will be most vulnerable,” said Dr Atilio Rivera-Vasquez from Cucuta, a city whose healthcare services are already collapsed by the high number of migrants there.

“They (migrants) have little economic access to buy disinfectant gels and soap to wash their hands, as well as a lack of money to buy non-perishable foods to self-isolate themselves. There are also many migrants who live on the streets, meaning they won’t be able to self isolate if they have coronavirus,” Rivera-Vasquez, who specialises in epidemics, said.

Jaime Castellanos, a Bogota-based professor of virology, said the number would continue to increase in Colombia as it is worldwide, but that Colombia’s technical capabilities to quickly diagnose the disease are not as sophisticated as other countries, like South Korea.

“The installations, staff and medical supplies are not enough for what would be needed to deal with these kinds of cases. Our health system would be completely overwhelmed” Castellanos said.

Colombia’s Ministry of Health said they were unable to give a comment to Al Jazeera at the time of publication.

Venezuelans will continue to cross

Analysts say that the border closure will only push Venezuelans to cross via “trochas”, or informal border crossings.

“I think it is a completely wrong decision made by the [Colombian] government,” said Ronald Rodriguez, the director of Rosario University’s Observatory on Venezuela.

“Colombia has a huge responsibility being the country that has most Venezuelan migrants and whose role should be to lead a response on behalf of all the other countries in the region who share the issue of Venezuelan migration,” he said. 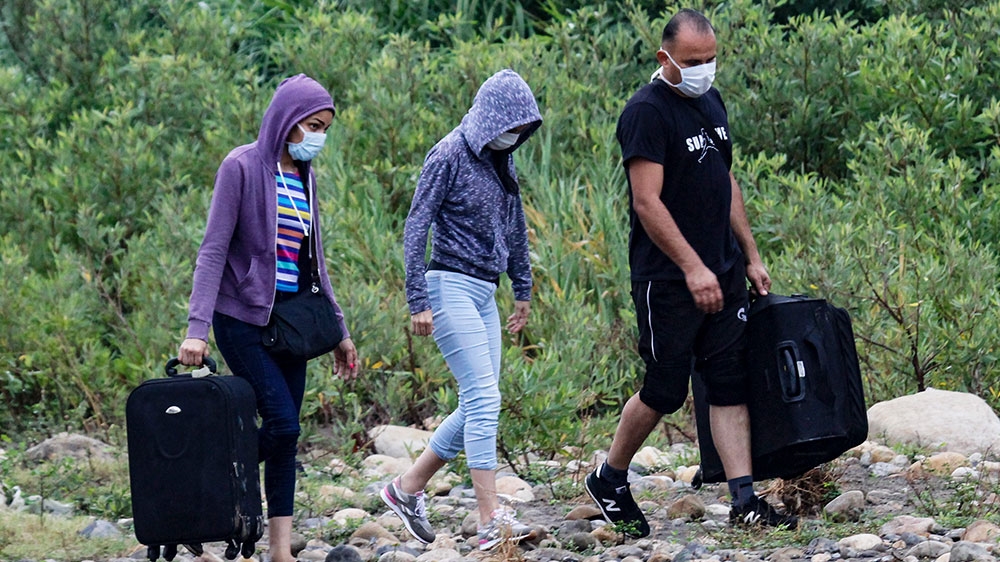 He added that because of the weak healthcare system most Venezuelans who contract the virus would probably end up coming to Colombia for healthcare.

“Colombia needs to prepare itself for what could come. Not only to care for people locally, but also in the event that more Venezuelans move towards the border area in search of medical assistance there and remembering that many Venezuelans are suffering with serious health issues that haven’t been treated by the Venezuelan health service like cancer, diabetes and HIV, and makes them more vulnerable in the face of a possible epidemic of COVID-19,” Rodriguez said.

“Another critical thing to point out about this population is that in Venezuelan tropical diseases are rife and anyone living with one of these diseases and gets infected with COVID-19 could face huge complications,” he added. “Venezuelans are going to try to get into Colombia in search of help to protect themselves from these diseases. The only thing the Colombian government has done is made the situation more difficult for Venezuelans.”

The government has not yet outlined exactly how it will manage the closure of the porous, 2,219km (1,379-mile) border with Venezuela. Colombian governors and mayors from around the country will meet Duque on Saturday to discuss how to work collaboratively tackle the virus around the country. 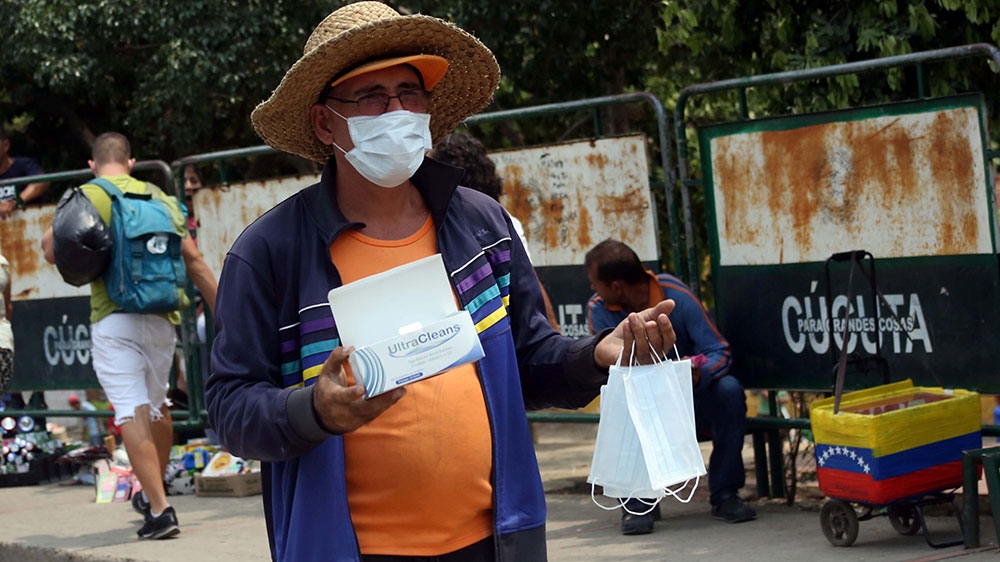 Jozef Merkx, head of UNHCR – the UN’s refugee agency – in Colombia, said the agency was “monitoring the situation and will work in close contact with Colombia’s Ministry of Health.”

Sergio Guzman, a political analyst, said that cooperation between the Colombian and Venezuelan government “would be desirable under this scenario, but politically unrealistic going forward”.

He said that the Colombian government’s “containment strategy must quickly move to become a strategy to prepare for social isolation, economic malaise, and a severe strain on healthcare services and provisions.”