A continent of shuttered shops and locked doors; European nations face up to coronavirus restrictions. 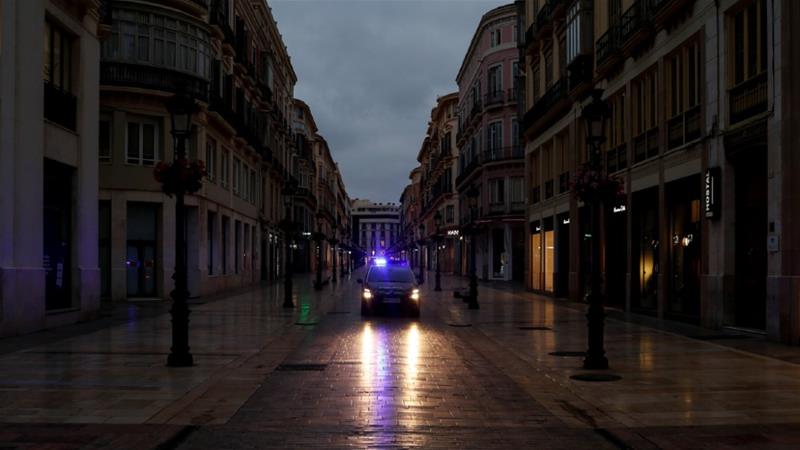 Millions of people across Europe are either self-isolating or facing mandatory lockdowns, border closures and bans on public gatherings.

Deserted streets and available seats on usually packed rush hour public transport are becoming common sights as the continent hunkers down amid the spread of the coronavirus pandemic responsible for thousands of deaths worldwide.

The European Union’s executive on Monday proposed a 30-day ban on incoming travel to the bloc for foreigners to battle the spread of coronavirus.

“The less travel, the more we can contain the virus. Therefore … I propose to the heads of state and government to introduce temporary restriction on non-essential travel to the EU,” said European Commission chief Ursula von der Leyen. “These travel restrictions should be in place for an initial period of 30 days, but can be prolonged as necessary.”

More than 1,000 troops have been deployed to the streets of Spain, as ministers warned the nation’s state of emergency would likely have to be extended on the first working day of the lockdown.

“Obviously we will have to extend this situation … in 15 days I do not think that we will be in a position to win this battle,” Transport Minister Jose Luis Abalos told RNE radio.

In Austria, police have been ordered to children’s playgrounds to disperse groups of five or more people, while Vienna looked to tighten its borders from Tuesday.

France and Germany have agreed to close their frontier to all but essential crossings, while the world-famous cafes and restaurants of Paris have served their last patrons for the foreseeable future. Food stores remain open in France, and food deliveries are also allowed, but plane, train and coach services between cities have all been reduced.

In Greece, officials announced on Monday all shops apart from supermarkets, pharmacies, banks, petrol stations and food delivery services would be closed. Anyone arriving from abroad will be placed in quarantine for two weeks to fight the coronavirus.

Greece had already cancelled mass gatherings and closed bars, restaurants, playgrounds and gyms. So far, the country has reported 331 confirmed cases of infections and four fatalities. Health authorities expect the number of infections to rise.

Latvia, meanwhile, is preparing to close its borders from midnight on Monday night.

“The main aim is to do everything possible to avoid more people becoming ill with coronavirus,” said Prime Minister Krisjanis Karins. Latvians and foreigners with residency rights in Latvia will be able to enter the country, and tourists will be able to leave after the deadline, he said.

Russia, which has halted most flights to and from European cities, will also halt trains to and from Latvia from Tuesday, having previously suspended international train services with Ukraine and Moldova.

Switzerland on Monday cancelled a session of its national parliament, the government-held crisis talks and the Swiss stock market plunged as new coronavirus cases accelerated.

A reported rise of some 840 new infections on Sunday brought total cases in Switzerland and neighbouring Liechtenstein to 2,200, a jump of more than 50 percent in a single day and signalling that the disease’s spread is intensifying. Of the total cases, 1,563 are confirmed.

Switzerland, wedged between badly hit neighbours France, Italy and Germany, has labelled the outbreak a “special situation”, shifting more power to the federal government to enact measures to protect its 8.6 million residents. Bern, which last week made more than $10bn available for economic aid amid the crisis, still has room to intensify the order.

The Swiss government has shut down schools nationwide for weeks, introduced border checks and severely curbed gatherings and events as part of efforts to protect, in particular, older residents who are at high risk.

After a series of emergency meetings, the Geneva canton on Monday ordered the closure of bars, restaurants, religious services and temporarily banned prostitution – which is legal in the country.

The United Kingdom is taking a different approach to most other nations in its attempt to balance the spread of the virus with its healthcare capacity, though Downing Street said plans to ration food would not be included in the government’s proposed emergency legislation.

Prime Minister Boris Johnson’s official spokesman told the BBC that retailers were taking “all necessary steps” to ensure there was a continued food supply, while Environment Secretary George Eustice was to meet the major supermarkets on Monday.

The pan-European STOXX 600 fell 7.9 percent, with markets in France and Spain leading losses as the two countries joined Italy in enforcing a national lockdown.

Airlines and holiday operators including TUI, EasyJet, British-Airways owner IAG and Air France – KLM were among the biggest decliners on the STOXX 600 as the pandemic brought global travel to a standstill.

The wider travel and leisure index plunged more than 12.6 percent. Europe’s fear gauge jumped to a record high of 91.78.

“Everyone’s just looking at the measures taken in terms of limiting [social] activity, which is currently outweighing any stimulus,” said Bas van Geffen, an ECB analyst at Rabobank.

“Even though they are providing as much liquidity as they can, we are currently seeing a supply shock that is hindering production. And we’re seeing consumers less willing to spend or even, with shops being closed, they can’t spend.”

Fiat-Chrysler, the car-making giant, is suspending production for two weeks at its European plants, while budget airline Ryanair is preparing to ground much of its fleet.

Lombardy, the northern Italian region that has suffered the biggest hit from Europe’s worst coronavirus outbreak, is showing the first signs of a possible slowdown in contagion, its governor said on Monday.

The heavily populated region, which includes Italy’s financial capital Milan, has seen 1,218 deaths. Of those, 252 were recorded between Saturday and Sunday, the largest toll so far.

In the whole of Italy, there were 368 new deaths from the COVID-19 outbreak on Sunday, easily the biggest daily toll recorded in any country, including China.

But despite the surge in deaths, Governor Attilio Fontana said he saw some reason for optimism in the data, as new cases appeared to be rising less quickly than a few days earlier.

“I have not seen today’s statistics yet, but … we can see some small steps forward,” he told Radio 1.

But Prime Minister Giuseppe Conte told daily Corriere della Sera the outbreak was still getting worse across Italy as a whole:

“Scientists are telling us that the outbreak has not reached its peak; these weeks will be the most risky.”

How vulnerable are children to coronavirus?