Vaccinations are rising in U.S. states where lagging demand left entire regions vulnerable to a Delta-driven surge of coronavirus cases. The shift offers a sign of hope, even as the country’s known cases since the start of the pandemic surpassed 35 million on Saturday.

For the third consecutive week, states with the highest number of coronavirus cases also had the highest vaccination rates, Karine Jean-Pierre, the deputy White House press secretary, said on Friday.

In Mississippi, where 44 percent of adults have been fully vaccinated, the seven-day average of people receiving a first dose was 5,203 on July 27, more than triple the average from July 1, according to data from the Centers for Disease Control and Prevention.

The same pattern is in play for other less vaccinated states where infections are surging. From July 1 to July 28, Louisiana almost quadrupled its seven-day average of administered first doses. And in Missouri, where the Delta variant spurred an outbreak in early July, the number of first doses administered daily almost doubled over a month.

Still, compared with the rest of the country, these states’ vaccination rates remain low. And their rates of hospitalizations and deaths are higher compared with states with more vaccinations.

More than 850,000 shots were recorded on Friday, raising the daily national average to more than 650,000 from about 500,000 three weeks ago. But the overall rate is less than a fifth of the U.S. peak average of 3.4 million shots, reached in mid-April. 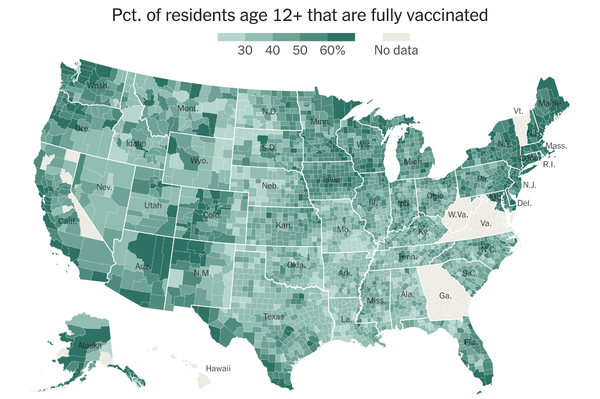 See How Vaccinations Are Going in Your County and State

See where doses have gone, and who is eligible for a shot in each state.

The C.D.C. said on Friday that about 190.5 million people had received at least one dose of a Covid vaccine, and about 164.2 million people were fully vaccinated, some by Johnson & Johnson’s single-dose vaccine but many more by the two-dose series made by Pfizer-BioNTech and by Moderna.

That still leaves more than half the country not fully vaccinated, including about 48 million children under 12, who are not eligible. Only full vaccination affords high protection from severe disease if someone infected with the Delta variant.

The national outlook is quickly worsening. Louisiana, which was averaging fewer than 400 cases a day at the start of July, is now averaging more than 4,100 cases a day, the most ever. The county that includes Jacksonville, Fla., is averaging almost 1,200 cases a day.

As a whole, daily case reports in the United States have risen 150 percent over the past two weeks, pushing the known pandemic total past 35 million.