The Sao Paulo state prison authority said it could not say how many inmates had escaped as it was “still tallying the exact number of fugitives.” Local media reported that as many as 1,500 had fled from four jails – Mongagua, Tremembe, Porto Feliz and Mirandapolis – ahead of the lockdown. The Sao Paulo state prison authority said “acts of insubordination” had taken place at the jails ahead of the suspension of the day-release program.

The suspension was necessary, it added, because 34,000 convicts would be returning to jail and “would have a high potential to install and propagate the coronavirus in a vulnerable population, generating health risks for servers and custodians.”

The uprising broke out after the Easter prison holidays were cancelled and restricitons were placed on visitors as the country grapples to control the spread of COVID-19. All prisons are semi-open and have no armed surveillance.

Lincoln Gakiya, a prosecutor in São Paulo state and specialist in drug gangs, said: “These prisoners were unhappy about the decision that suspended the Easter leave. The prisoners were told and in some units, rebelled.”

In one video hundreds of inmates are seen jogging down the street as prison bells alarm in the background in Mongaguá on the São Paulo – where 400 inmates escaped. A man shouts: “Come back Monday, OK?” In another, what looks like a squad team can be seen huddling and shooting out as they search for prisoners. And a car is ablaze next to a building.

Mongaguá is overrun, bulging at 2,796 prisoners, with the capacity for 1,640 people, state media reports.

The Easter break – one of five annual holidays for inmates who work during the day – was cancelled to omit the risk of 34,000 convicts returning to prison with coronavirus after spending time with family or friends.

Sao Paolo state penitentiary said: “The measure was necessary because the benefit would include more than 34,000 convicts of the semi-open regime who, returning to prison, would have high potential to install and propagate coronavirus.” 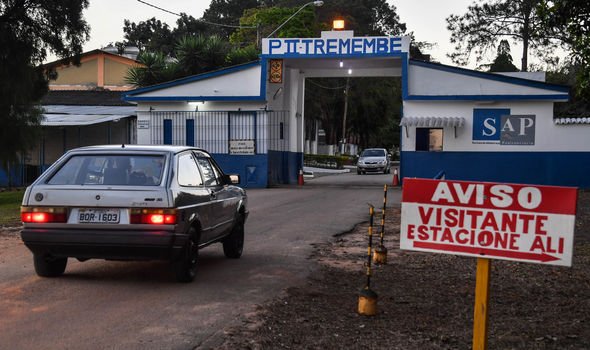 Meanwhile, at Mirandópolis prison, which has capacity for 516 prisoners yet houses 912, inmates protested the coronavirus lockdown by “setting fire to their belongings”.

A security specialist said another factor behind the prison break was the treatment of the country’s largest drug gang, the São Paulo-based First Capital Command (PCC). Renato Lima, director-president of the Brazilian Public Security Form said some prisoners had refused to attend hearings known as a “white strike” over treatment of gang leaders.

Law enforcement said it was “taking care of the situation.”

It is unknown how many prisoners are still on the run.

Sao Paulo state is home to the First Capital Command, Brazil’s most powerful prison gang, which is expanding quickly across the country and in neighboring nations. It traffics guns, drugs and other contraband.

Countries around Latin America tightened restrictions on Monday to slow the spread of the new coronavirus, with Peru putting military personnel on the streets, Costa Rica and Colombia closing their borders and other countries ordering curfews.