Bar and restaurant owners on the Greek island of Mykonos are angry after the government said they must shut at midnight to curb the spread of coronavirus.

Greece has imposed local restrictions on businesses, especially those that cater to large crowds, as a recent spike in COVID-19 cases threatens to undo the country’s relative success in containing the pandemic so far.

With just a day’s notice, bars, cafes, clubs and restaurants were ordered to close by midnight from 11 August until 23 August, leaving business owners frustrated and worried about their livelihoods. 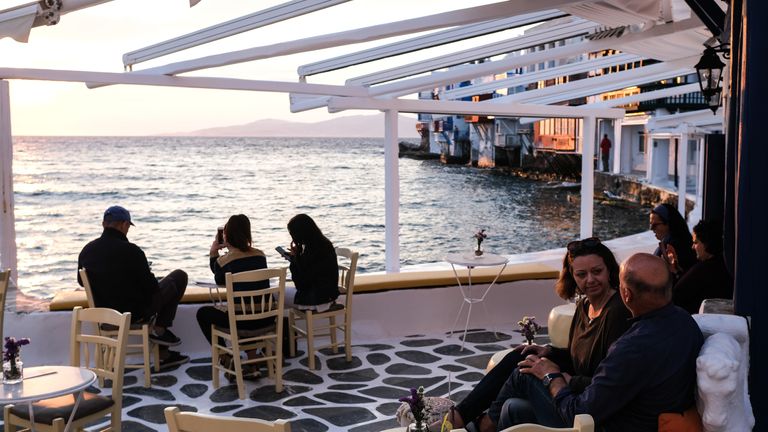 Responding to the restrictions, bar owner Stavros Grimplas said: “You can’t take a unilateral decision and shut down the island the following day, at midnight.”

He added: “Everyone has come (to Mykonos) to eat their food, to entertain themselves, swim in the sea.

“At this moment, we are fooling them. We told them ‘come to Greece’ and Greece has shut down.”

When Prime Minister Kyriakos Mitsotakis officially declared the tourist season open on 13 June, he said that “there is no risk-free approach”.

At that time, Greece had 3,112 confirmed coronavirus cases and 183 deaths.

As of Saturday, the number of cases in Greece has surged to 6,858, with the majority of new ones coming in August, along with a total of 226 deaths.

Tourist hotspot Mykonos attracts two million visitors each summer, despite having a population of just 10,000.

While this summer has already proved a stark contrast as there are no cruises – which would normally account for around a third of visitors – beaches have been quite crowded and hotels are at around 70% capacity, unlike most other Greek tourist destinations.

Businesses have also been opening earlier to compensate, with owners signing a letter accusing the government of wanting “to render us mere spectators of the destruction of our businesses”.

They are also demanding to see the data that led to the new curfew and why the government is still allowing illegal parties to take place in isolated villas across the island.

From Monday, businesses in Athens will also have to adhere to the new midnight closing hours or risk fines. Coronavirus restrictions are also tightening in other European countries, with France set to propose masks be worn in shared workspaces as it grapples with a fresh spike in cases.

On Saturday, France reported 3,310 new infections in the previous 24 hours – which is a record since the country lifted lockdown in mid-May.

Meanwhile, Spain is expected to implement tougher measures after cases have soared across the country.