An anti-malaria drug that could help fight coronavirus could be available in the United States within days, Donald Trump has said.

The president said hydroxychloroquine, which is also used for severe arthiritis, lupus and autoimmune condition Sjrogen’s syndrome, has shown “very encouraging early results” and is set to be approved for coronavirus use quickly.

“We’re going make that drug available almost immediately…it could be available in days,” he said.

He said he is getting rid of bureaucracy and red tape with the Food and Drugs Association (FDA) to ensure drugs can be made available as soon as possible to treat those with COVID-19.

Biopharma company Bayer is donating to the FDA three million tablets of hydroxychloroquine, which is cheap and has been around for more than 70 years.

A small study in France found only 25% of patients with coronavirus who were given the drug tested positive after six days, compared to 90% who did not receive the drug in the same timeframe.

Mr Trump also said antiviral medicine remdesivir – originally developed to treat Ebola – is “close to being approved” by the FDA.

It is currently going through clinical trials in the US and around the world.

The US has the sixth highest number of coronavirus cases in the world, with nearly 11,000 confirmed on Wednesday and 154 deaths – mostly in Washington state.

FDA chief Dr Stephen Hahn reassured Americans both drugs are “going through the normal process” in the US, with the FDA making sure their safety and efficacy is key before giving them approval.

The oncologist said they are looking at drugs already approved for other treatments to ensure they can get a medicine to patients quickly and with knowledge of their side effects. 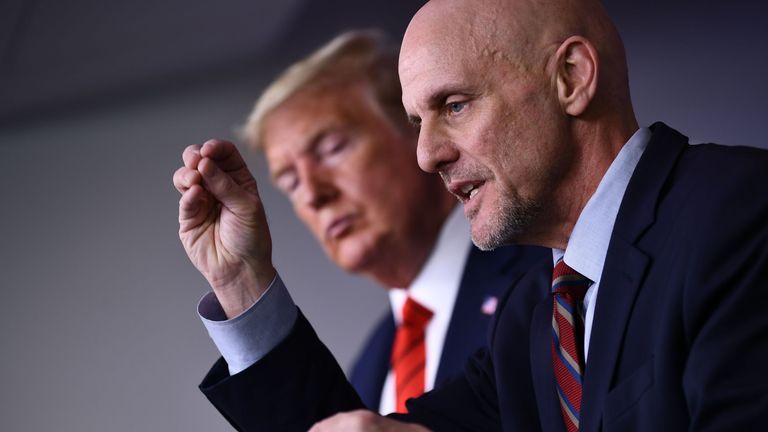 Mr Trump said the US has been carrying out drug tests for a vaccine and therapies since January, as soon as they knew about the virus.

He said “the world is paying a big price” for China not releasing information early on about COVID-19 – which the president calls “the Chinese virus”.

With regards to the medicines, Dr Hahn added: “We have the right drug but it may not be in the right dosage form, it’s important we get that right.

“We’re working to get the drugs into the hands of users.”

To be able to get the drugs to patients quickly he said they will utilise the “compassionate use” pathway which allows those who are dying or have a serious disease to try experimental drugs.

Dr Hahn added that the FDA has 10,000 scientists and doctors “working around the clock” to create a vaccine for COVID-19, which is in its second stage now.

“We’re working hard to fast track the vaccine as much as possible,” he said.