COLORADO SPRINGS — Anderson Lee Aldrich loaded bullets into a Glock pistol and chugged vodka, ominously warning frightened grandparents not to stand in the way of an elaborate plan to stockpile guns, ammo, body armor and a homemade bomb to become “the next mass killer.”

“You guys die today and I’m taking you with me,” they quoted Aldrich as saying. “I’m loaded and ready.”

So began a day of terror Aldrich unleashed in June 2021 that, according to sealed law enforcement documents verified by The Associated Press, brought SWAT teams and the bomb squad to a normally quiet Colorado Springs neighborhood, forced the grandparents to flee for their lives and prompted the evacuation of 10 nearby homes to escape a possible bomb blast. It culminated in a standoff that the then-21-year-old livestreamed on Facebook, showing Aldrich in tactical gear inside the mother’s home and threatening officers outside — “If they breach, I’m a (expletive) blow it to holy hell!” — before finally surrendering.

But charges against Aldrich for the actions that day were dropped and there was no effort to seize the person’s weapons under Colorado’s “red flag” law for reasons the district attorney and the sheriff have refused to explain due to the case being sealed. All of it now stands as one of the most glaring missed warnings in America’s sad litany of mass violence because, just a year and a half later, Aldrich was free to carry out the plan to become “the next mass killer.”

Clad in body armor and carrying an AR-15-style rifle, Aldrich entered the Club Q gay nightclub just before midnight on Nov. 19 and opened fire, authorities say, killing five people and wounding 17 others before an Army veteran wrestled the attacker to the ground.

“It makes no sense,” said Jerecho Loveall, a former Club Q dancer who is recovering from a wound to the leg from one of the high-powered rounds. “If they would have taken this more seriously and done their job, the lives we lost, the injuries we sustained and the trauma this community has faced would not have happened.”

“It was absolutely preventable,” said Wyatt Kent, who held the hand of a woman as she bled to death on top of him, and who also lost his partner that night. “Even if charges aren’t filed for a bomb threat, maybe you’re not mentally sound enough to own a firearm.”

Why nothing was done to stop Aldrich since coming onto law enforcement’s radar last year is a question that has haunted this picturesque Rockies city of 480,000 since the shooting, even as loved ones have begun burying the victims and the shuttered Club Q has become a shrine surrounded by hundreds of bouquets, wreaths and rainbow flags.

Criminal defense lawyers with whom AP shared the law enforcement documents say they questioned why charges were not pursued in the 2021 incident given the grandparents’ detailed statements, a tense standoff at the mother’s home and a subsequent house search that found bomb-making materials that Aldrich claimed had enough firepower to blow up an entire police department and a federal building.

The documents were obtained by Colorado Springs TV station KKTV and verified as authentic to AP by a law enforcement official who was not authorized to discuss the sealed case and kept anonymous. Documents also included a judge’s order to jail Aldrich on $1 million bond and a listing by El Paso County District Attorney Michael Allen of seven offenses “committed, or triable,” including three felony counts of kidnapping and two of menacing.

For his part, Allen has repeatedly declined to comment on why those charges didn’t go forward, citing a Colorado law that automatically seals records in cases when charges are dropped and requires him to not even acknowledge the records exist. The law was passed three years ago as part of a nationwide movement to help prevent people from having their lives ruined if cases are dismissed and never prosecuted. 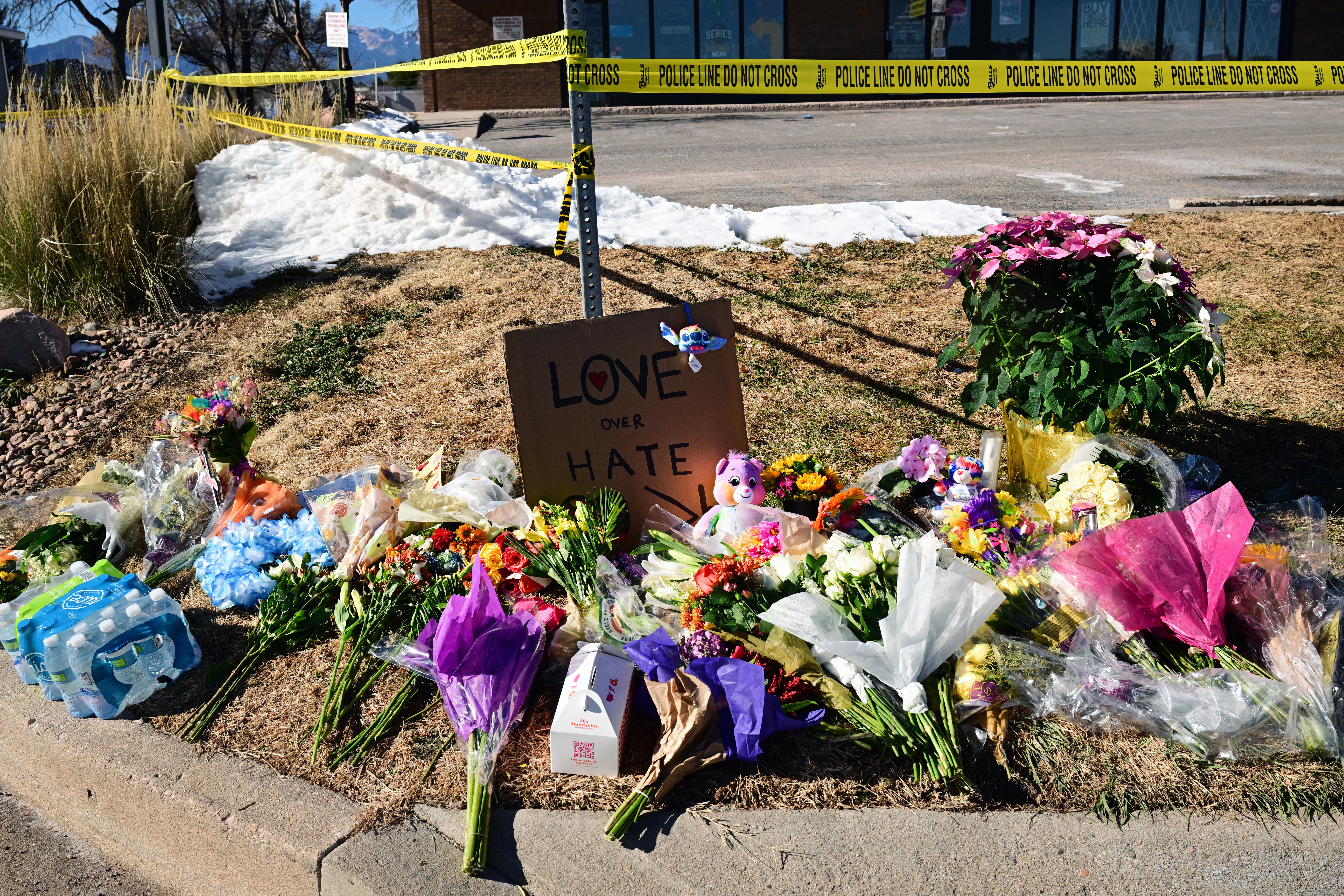 And even though Allen said during a news conference soon after the nightclub shooting that he “hoped at some point in the near future” to share more about the 2021 incident, he has yet to do so. The Denver Post and other news organizations have gone to court seeking to unseal the entire case file, a request scheduled to be heard Thursday.

In the absence of that file, there are only scattered clues about what happened after Aldrich’s 2021 arrest, including Aldrich telling The Gazette of Colorado Springs in August about spending two months in jail as a result of the incident and asking the publication to remove or update its web coverage about it, asserting the case had been dismissed. “There is absolutely nothing there, the case was dropped,” Aldrich said in a phone message to The Gazette, adding, “It is damaging to my reputation.”

When a Gazette reporter followed up with a call and asked why the case was dropped, Aldrich declined to say anything more because the case had been sealed.

Such a troubling case — dropped or not — could still have been used to trigger Colorado’s “red flag” law, which allows family members or law enforcement to ask a judge to order a removal of guns for a year from people dangerous to themselves or others, with possible extensions based on subsequent hearings.

But court records show neither Aldrich’s grandparents nor mother went to a judge to get such an order. And the agency that arrested Aldrich, the El Paso County Sheriff’s Office, didn’t either.

El Paso County is especially hostile to the state’s red flag law, among 2,000 counties nationwide declaring themselves a “Second Amendment Sanctuary” that opposes any infringement on the right to bear arms. It passed a resolution in 2019 specifically denying funds or staff to enforce the law.

Sheriff Bill Elder, who declined to comment on Aldrich’s 2021 case, has previously said he would only remove guns on orders from family members, refusing to go to court himself to get permission except under “exigent circumstances.”

“We’re not going to be taking personal property away from people without due process,” Elder said as the law neared passage in 2019.

Colorado Gov. Jared Polis, the first openly gay man ever elected to lead a state, said in the wake of the nightclub shooting that the failure to take away guns from the alleged shooter needs to be investigated. Authorities have refused to say how the weapons used in that attack were obtained.

“There were many warning signs,” Polis spokesman Conor Cahill told the AP. “It appears obvious that an Extreme Risk Protection Order law could have and should have been utilized, which would have removed the suspect’s firearms and could very well have prevented this tragedy.”

Aldrich, now 22, remains jailed without bond and was charged with 305 criminal counts Tuesday, including first-degree murder and hate crime charges, in the nightclub shooting. The murder charges carry a potential sentence of life behind bars.

Defense attorneys have said Aldrich is non-binary, not strictly identifying with any gender. Aldrich’s attorneys did not respond to a request for comment.

In both a mugshot and first court appearance, the 6-foot-4, 260-pound Aldrich appeared slumped with deep bruises and cuts on a fleshy face. It was a stark contrast to the many smiling photos as a youngster on the mother’s Facebook page that belied a turbulent life marked by domestic violence, bullying and family run-ins with the law.

In an interview after the shooting, Brink told San Diego television station KFMB that he had lost track of Aldrich a decade ago and thought the child had died by suicide, until Aldrich reached out to him by phone last year. Brink said that when he first heard about the shooting, he was troubled the alleged shooter had gone to a gay bar, citing the family’s Mormon religion.

“We don’t do gay,” Brink said, adding that he now regrets having praised his child for violent behavior when younger. “Life is so fragile and it’s valuable. Those people’s lives were valuable.”

The alleged shooter, born Nicholas Franklin Brink, was so embarrassed by the father, according to 2016 Texas court documents, that weeks before turning 16, the teen filed for a formal name change to Anderson Lee Aldrich.

The filing came months after Aldrich was apparently targeted by online bullying. A website posting from June 2015 attacked a teen named Nick Brink. It included photos similar to ones of the shooting suspect and ridiculed the youngster for being overweight, not having much money and an interest in Chinese cartoons.

Laura Voepel, the mother, has her own history of outbursts and trouble with the law, including an arson count in Texas reduced to a lesser charge. She reportedly was recorded in a July 2022 video in an airport hurling racial epithets at a Hispanic woman who she felt had been taking too long to get her luggage off a plane.

And according to a court record, Voepel was arrested just hours after the Nov. 19 nightclub shooting on resisting arrest and disorderly conduct charges. She had refused to leave the apartment where she lived with Aldrich, according to FBI records obtained by AP. She can be heard crying out for help as she is pulled by officers away from her home on video she asked neighbors to record.

Aldrich’s behavior on June 18, 2021, began, according to the sealed law enforcement documents, after the grandparents called a family meeting in their living room about their plans to sell their home and move to Florida. The grandchild responded with rage, telling them this couldn’t happen because it would interfere with Aldrich’s plans to store materials in the grandparents’ basement to “conduct a mass shooting and bombing.” The grandparents told authorities Aldrich threatened to kill them if they didn’t promise to cancel the move.

The grandparents begged for their lives as Aldrich told them of the plans to “go out in a blaze.” When Aldrich went to the basement, they ran out the door and called 911.

A short time later, doorbell video shows Aldrich arriving at the mother’s home lugging a big black bag, telling her the police were nearby and adding, “This is where I stand. Today I die.”

Another shot shows the mother later running from the house. “He let me go,” the law enforcement documents quote her as saying. Neither Voepel nor Aldrich’s grandparents, who now live in Florida, returned messages seeking more details.

In the end, Aldrich holed up in the mother’s home, threatening to blow up the place as police swarmed and deployed bomb-sniffing dogs. “Come on in boys, let’s (expletive) see it!” Aldrich yelled on the Facebook livestream before later surrendering with hands up and tactical gear swapped for a short-sleeved shirt, shorts and bare feet.

Aldrich’s next arrest would come 17 months later and a few miles away inside the Club Q.

Gunshot victim Loveall says his days since have been spent dealing with grief over those who died and bouts of crying he can’t control. He also fears going to sleep because of the swarm of images in his head: Bullets flying, people diving for cover, shattering glass and blood all over.

“It happened so fast they didn’t have time to scream,” Loveall said as he smoked a cigarette outside his mobile home.

“There is no reason why he should have had access to an assault rifle… especially for someone who has been quoted saying ‘I’m going to be the next mass shooter.”’