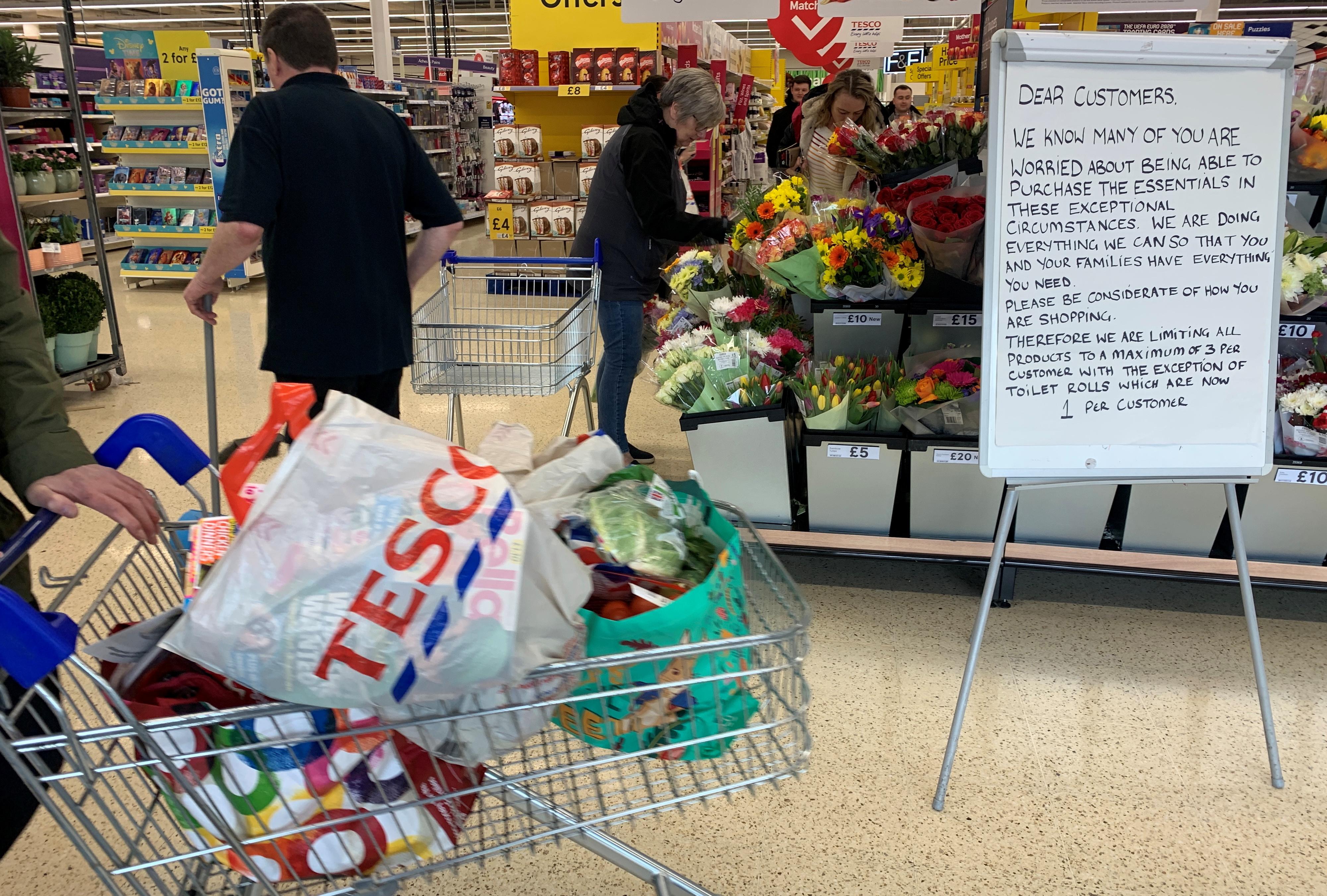 The spread of the virus has triggered hoarding across the world and while European countries have restricted travel, British companies say the supply chains which bring fruit, flour and fish from across the world are so far still functioning.

Prime Minister Boris Johnson, who has faced criticism for acting too cautiously, said on Tuesday there was no reason to stockpile and that food supplies were safe.

But in supermarkets across the land, shoppers were spooked.

Aisle after aisle was left empty with just ice cream and chocolate Easter eggs remaining at many major stores. Huge queues snaked around some supermarkets on Wednesday, Reuters reporters said.

“It is relentless and demand is still rising,” David Potts, chief executive of Morrisons, the No. 4 player, told reporters.

Britain’s big grocers, including market leader Tesco, Sainsbury’s, Asda, and Morrisons along with discounters Aldi and Lidl, have restricted purchases.

Tesco is allowing shoppers to buy just two packs of certain items such as dried pasta, tinned tomatoes and anti-bacterial cleaning products. Sainsbury’s and Asda are limiting customers to three of any one product.

“We are asking our customers to shop responsibly so that everyone has access to the essentials,” Asda said, adding that it would be temporarily closing cafes and pizza counters to free up space in its warehouses and capacity – a move also implemented by Sainsbury’s.

Reuters reported on Monday that supermarket groups were working on plans to streamline their operations by cutting cafes, counters and other services to enable a depleted workforce to maintain basic provisions.

The government and supermarket bosses say there is enough food but that stores are facing gigantic demand that can only be compared to the pre-Christmas period.

“We have enough food coming into the system, but are limiting sales so that it stays on shelves for longer and can be bought by a larger numbers of customers,” Sainsbury’s Chief Executive Mike Coupe said in a letter to customers.

Morrisons said it was inevitable there would be supply-chain strain given the extraordinary demand, though hauliers said that so far the trucks and ships which bring food to much of Britain were still getting supplies through.

“We are currently facing unprecedented challenges and uncertainty dealing with COVID-19,” Morrisons chairman Andrew Higginson and its CEO Potts said.

The supermarket industry says it is working closely with suppliers to keep food moving through the system and is making more deliveries to stores to get shelves re-stocked.

It says supplies are still coming in from Europe, despite lock-downs in Italy, Spain and France.

One supermarket industry source said the government was only just starting to understand the enormity of the crisis for the industry. 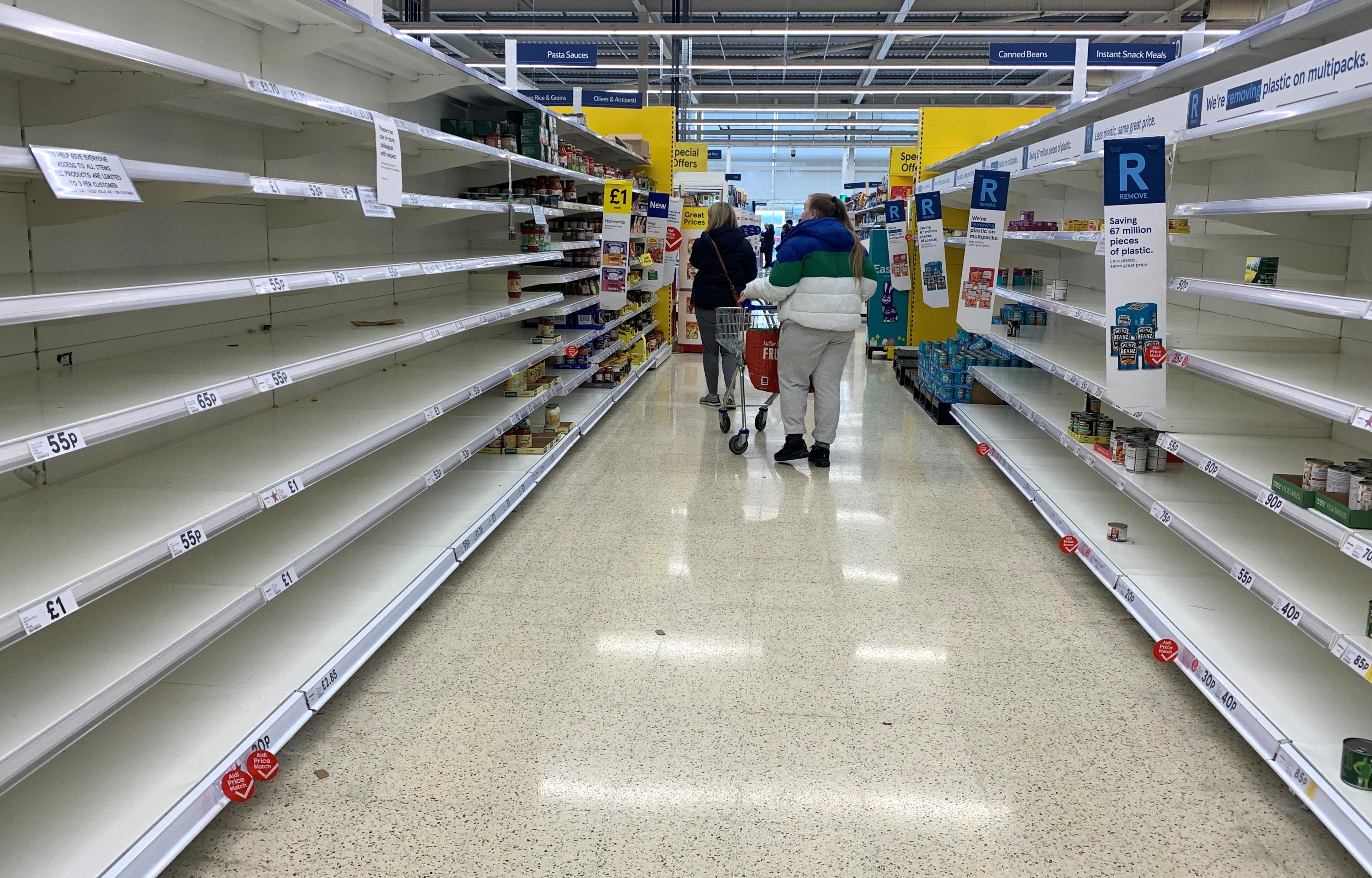 “They’re in ‘asking questions’ mode, they’re certainly not in ‘telling us anything’ mode. They’re trying to understand what we’re seeing rather than telling us to do anything specific,” the source said.

A second source added: “government are asking questions, listening and planning, but we’d appreciate a bit more help to get things moving.”

The source said the government could help by lifting restrictions on driver hours and relaxing Groceries Supply Code of Practice (GSCOP) regulations which slow the industry down.