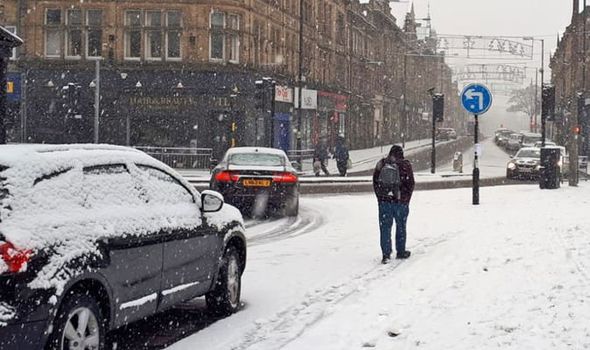 Winter is about to dish up a brutal revenge after a ‘tranquil’ autumn, according to weather forecasters. It comes as Britain reels from a weekend of hurricane-force winds, torrential rain and snow.

Jim Dale, meteorologist for British Weather Services, said: “In terms of storms over the next month and into New Year, things are just about to get going.

“Storm Arwen was the beginning of many. The potential is there for a run of storms through the festive season and perhaps beyond.

“So far this autumn, the weather has been too settled and tranquil, and this always leads to a counterbalance.”

Warmer than average North Sea waters will plough energy into the atmosphere driving the barrage, he said.

He added: “Temperatures in the North Sea are slightly higher than average.

“This puts energy into the atmosphere and strengthens low-pressure systems bringing these stormy conditions.

“I would not be surprised to now see storms as a dominant feature not just through December, but into the start of next year.”

Brutal gales lashed the UK over the weekend as winds of up to 100mph whipped up huge coastal gales.

Storm Arwen prompted a rare red warning from government meteorologists as and was dubbed ‘one of the worst storms for years’.

Calmer and milder conditions will return briefly this week before temperatures plunge ahead of the weekend.

Long-range experts fear this winter may be the coldest and snowiest since the big freeze of 2010/11.

Changes in stratospheric temperatures over the Arctic could add to the misery, as during the 2018 Beast from the East.

James Madden, forecaster for Exacta Weather, said: “December is now looking to be a cold month throughout.

“From mid-month and into the final third of December could see some sudden stratospheric movements bringing an even colder north-east or easterly wind that could persist for number of weeks.

“Snow on Christmas Day is more likely in the north of the country, but things can change rapidly, and we can’t rule out festive snow anywhere.”