BBC Weather: UK to feel Autumnal as rain moves in

The BBC weatherman went on to predict temperatures ranging from between 12 and 18 degrees across the UK. Mr Taylor also forecasted gusty winds and announced there would be outbreaks of showers in East Anglia and throughout the South-East. The BBC weatherman also explained that it will be colder in Scotland as frost is expected to settle this weekend. And overnight temperatures are also expected to fall away causing colder conditions across the country.

Mr Taylor said: “A few showers to come today and through to the weekend.

“But astronomically speaking we’re officially into autumn, and with it, we’re going to start to see temperatures fall away a little bit.

“So it’s going to have more of an autumnal feel wherever you are across the country.

“Out there at the moment, well through the night we’ve seen this area of cloud push its way Southwards. 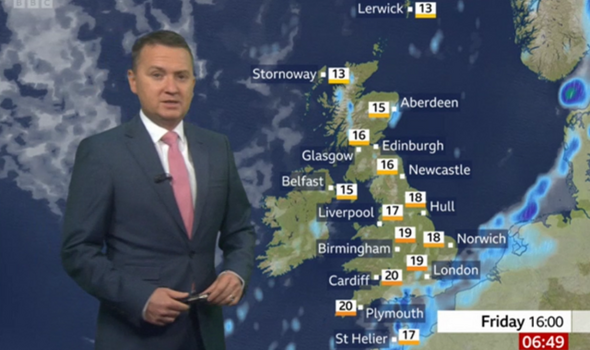 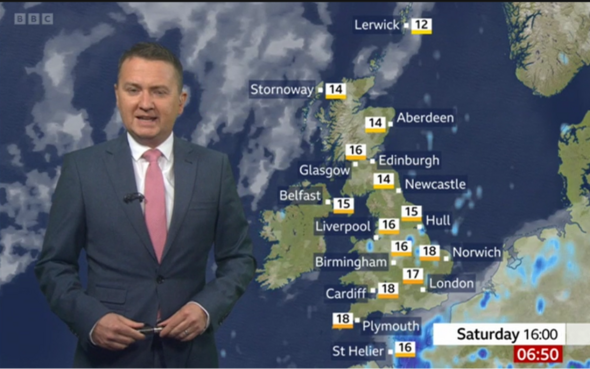 Mr Taylor added: “It’s that, that brought the rain yesterday lingering towards the South-East corner through today.

“So outbreaks of rain through East Anglia and the South East Channel Islands, coming and going all day long.

“The odd heavier burst, there’s also that but there is a lot of sunshine around.

“Mist and fog across the borders of Scotland and England which will gradually clear.

Mr Taylor said: “Rain showers in Western Scotland and Northern Ireland will still be there through the day.

“One or two will crop up elsewhere but a lot of you will get away with a dry Friday, sunny spells.

“And out of the sunshine feeling a bit cool but temperatures not far from what we would normally expect at this stage in September.

“Now through this evening and overnight outbreaks of rain still continue towards that South East corner in the Channel Islands. 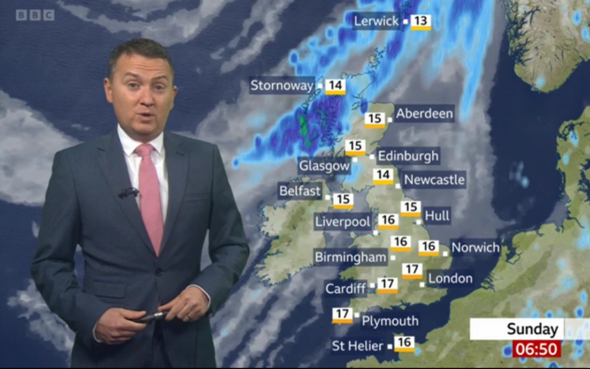 Mr Taylor added: “But you will see a few showers crawl down the Eastern coast of Scotland in England.

“One or two into the Irish sea, but many of you will be dry with clear skies through the night.

“And it will be a good deal cooler as well, single-figure temperatures from South Wales, the Midlands and Northwards.

“And there could even be a touch of frost in some shelters Scottish Glens to start your Saturday, but a lot of dry and bright weather here.”