BBC Weather forecaster Carol Kirkwood predicted temperatures ranging between 12 and 29 degrees as we enter the middle of the week. Due to a change in the direction of the wind, Ms Kirkwood forecast cooler fresher conditions in parts of the UK. But most in the South Britons can expect murkier conditions and outbreaks of rain. Ms Kirkwood forecasted more humidity in the evenings and overnight as we head into the weekend.

Ms Kirkwood said: “It is going to turn a bit cooler and fresher as we go through the next few days, as the wind changes direction.

“Some of us are off to a beautiful start, look at this picture from one of our weather watchers, sent in from Lincolnshire this morning.

“Now if you’re stepping out, to answer Ben’s question a little more fully, you can see our latest temperatures.

“So it’s only 12 degrees in Lerwick, but it’s already 19 degrees in Birmingham and also in Cardiff and also London.

JUST IN: Putin’s puppet lays out plan to snatch Ukrainian children from families ‘Have to do this!’ 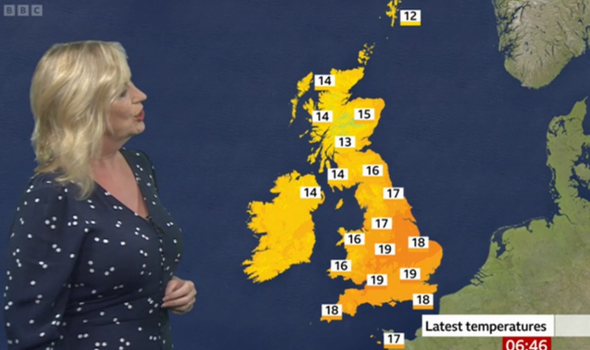 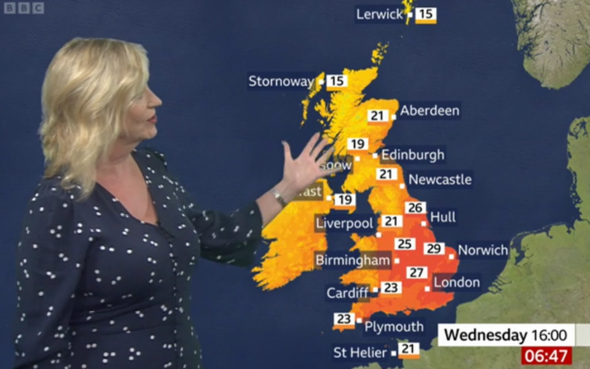 Ms Kirkwood added: “What is happening today is we’ve got this weak weather front sinking South ahead of it we hang on to the humid air.

“But behind this weather front, the wind veers to more of a North Westerly, so that is going to bring in some fresher air, which eventually will cross us all.

“But the weather front in the South is bringing some murky conditions this morning across parts of Wales the Midlands into the South East with some spots of rain.

“The rain dying away as it pushes into the far South East, now behind that, there will be a fair bit of sunshine, more so than yesterday. 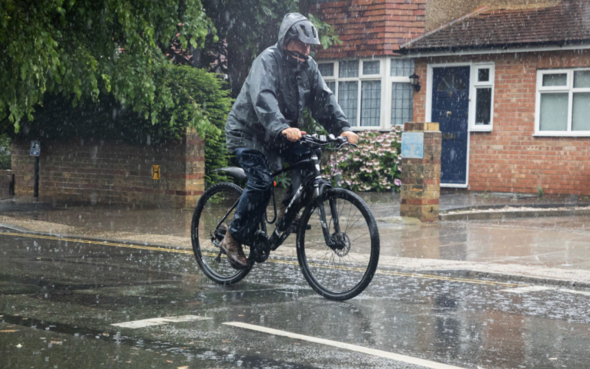 Ms Kirkwood added: “Now through this evening and overnight there goes our weather front, pushing away and taking its cloud with it.

“There will be some clear skies for some of England and Wales, but we’ll have some heavier showers moving across Northern Ireland eventually getting into Scotland and Northern England as they head Eastwards.

“A fresher night tonight, much more comfortable for sleeping in than last night.

“So we pick up this weather front, it clears Eastern Scotland, but you can see this cloud associated with it, across parts of Northern England and Wales sinking towards the Midlands.”