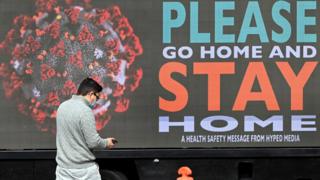 Australia has recorded its deadliest day of the coronavirus pandemic amid a second wave of infections in Melbourne.

Nineteen deaths were reported in Victoria – of which Melbourne is the capital – on Monday.

Victoria has now seen about two-thirds of Australia’s total 314 deaths and approximately 21,400 infections.

But the rate of daily infections – though still in the hundreds – has dropped in recent days, prompting hope that a strict lockdown is working.

Melbourne’s second lockdown began over a month ago, but residents have been subject to a night-time curfew and stricter requirements since 3 August.

Workers must carry a permit to leave home, and all non-essential businesses have been shut. Mask-wearing in public is also compulsory.

Victoria reported 322 new cases on Monday, down from a high of 725 recorded five days ago. Other states reported few or no cases.

More than 100 deaths have been recorded in Victoria in just the past week as hospital admission rates also rise.

Victorian Premier Daniel Andrews said it was too early to tell if the state was at a turning point, but “we’re certainly seeing some greater stability” following the stricter measures.

“It’s always better to be lower than the previous day, but it is only one day’s data,” he said.

Most deaths have been linked to outbreaks in nearly 100 aged care homes in the state.

But a man in his 30s was among last week’s victims – prompting authorities to urge young people to take greater care.

Queensland, which has closed its border to NSW and Victoria, said on Monday it appeared to have avoided an outbreak, two weeks after travellers brought the virus back from Melbourne.

What happened to Australia’s early success?

Australia has still fared better than many countries overall due to effective suppression measures early in the pandemic.

But since June – when most Australians emerged from a first lockdown – the outbreak in Melbourne has spiralled.

Infections there make up more than 70% of Australia’s total cases since the pandemic began.

The outbreak is suspected to have begun with breaches in hotel quarantine of infected travellers returning from overseas.

In recent days, medical groups have raised alarm over the growing number of healthcare workers falling sick with the virus.

There are now over 700 such cases. A survey of physicians showed 20% of doctors in hospitals were having to source their own protective gear.