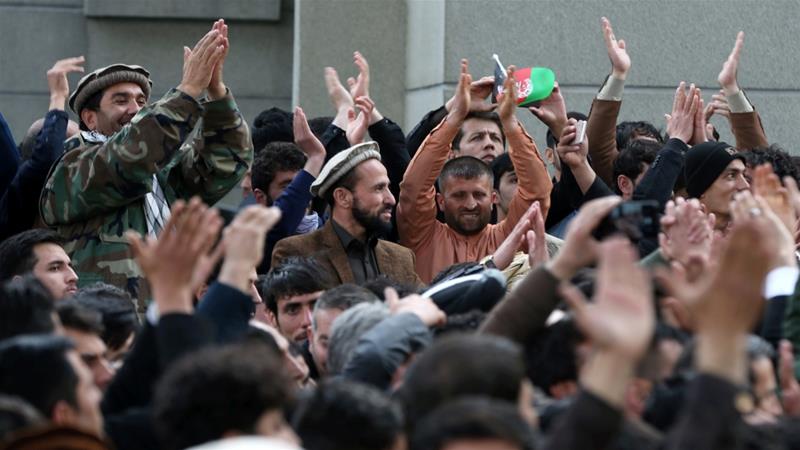 Both the leaders on Monday held their own ceremonies and formed parallel governments, with Abdullah refusing to recognise Ghani’s inauguration, as efforts by the United States to resolve the crisis failed.

Several sources confirmed to Al Jazeera that the US administration, led by special envoy Zalmay Khalilzad, had been negotiating with the rivals over the past 24 hours to reach an amicable settlement.

The situation was similar to 2014 when John Kerry’s intervention in a similar dispute led to the formation of the National Unity government after a power-sharing deal was agreed upon by Ghani and Abdullah.

However, this time the US leaders failed to bring the parties to a settlement, resulting in Monday’s unusual development. Abdullah had disputed the election results announced last month and declared himself the winner.

‘Neither of them deserves position’

Meanwhile, Afghan citizens watched a new crisis brewing in the country with nervousness and disbelief, while the otherwise crowded streets of capital Kabul wore a deserted look on Monday morning.

When asked who the rightful president of Afghanistan was, Mohammad Rashid, a 29-year-old butcher in western Kabul, took a deep breath before answering: “I am not sure. Neither of them deserves the position.”

“They both had a chance to work together but they did nothing. Violence is worse than ever and the economy is in trouble,” said Rashid, who watched both the inauguration ceremonies on a small television in his shop.

He said he was deeply distressed that the two leaders were unable to achieve peace for the war-wracked country.

“Such a thing has never happened in any part of the world before,” he told Al Jazeera. “Nothing good can come out of this, and there is no hope left for a peaceful future after watching today’s development.”

Similar sentiments echoed among other Afghans in the capital, irrespective of which leader’s claim to presidency they supported.

But despite his vote of confidence for Ghani, he had no hope of a peaceful outcome for the current political crisis.

“Every country has one leader who is running their affairs, and our country is divided between two governments. We can’t predict the future but the path we are on right now is very wrong. The direction our leaders have chosen is bound to lead to a crisis,” he said.

However, for some Afghans, the current political instability was neither shocking nor surprising.

“This is Afghanistan and this is why it is Afghanistan. Nothing here ever takes the usual predictable path, unpredictability is predictable,” said 18-year-old Sosan Hussaini, a former sportswoman and now a coach at a sports club in Kabul.

“Of course, officially Ashraf Ghani is the president, but neither of them has done anything for us as yet, even though they had the chance,” she said, fearing the situation could get worse.

Among the many concerns emanating from a crisis of leadership, the one Afghans fear the most was about the future of peace talks with the Taliban.

Last month, the US and the Taliban signed a deal, paving the way for an intra-Afghan dialogue that could possibly end the 19-year-long conflict in the country that has claimed thousands of lives.

However, as the two leaders claimed power, Afghans fear it may throw a wedge in the prospects of any future negotiations with the Taliban.

“Both claim to be leaders of the country, but why will Taliban talk to any one of them?” said Rashid.

“They have made a mockery of people’s will. They don’t take our aspirations seriously,” said an angry 60-year-old shopkeeper who did not want to be named, as he listened to the inaugural speeches of both the leaders.

“They have hurt the progress made in peace talks because of their dispute.”

Like many Afghans, he also invoked divine intervention to save Afghanistan from further crisis. “We can only pray to God to save us from what comes after this.”