These panzanella recipes don’t require much cooking, but you’d never know it from the complexity of flavors.

Some of my favorite recipes in the world were developed by cooks who refused to waste stale bread — or roti, or sangak — repurposing tough, old crusts into unexpectedly delicious meals.

In Tuscany, cooks ripped up hulking, dried-out country bread and soaked the pieces in water, then squeezed out the extra liquid and tossed it into a vegetable salad called panzanella. In the 1970s, Marcella Hazan admitted she preferred a more lavish version, reviving her loaves with fat instead of water, frying the bread in olive oil. This method is its own well-established style of panzanella now, and I love it, particularly with late-summer produce

Other than toasting the bread, which you can do on a sheet pan in the oven or in a frying pan, a summery panzanella doesn’t involve much actual cooking. Mix a dressing, cut some raw vegetables, and toss together.

Eric Kim has a new panzanella recipe this week (!!) packed with raw zucchini and maple-candied bread. It’s simple, but carefully put together, so each step matters: Salt the vegetable first, just like Eric says, to both draw out excess moisture and concentrate its gentle flavor. As soon as the salad is dressed, eat it right away.

If you want a panzanella with wiggle room, Melissa Clark makes one with tomatoes and mozzarella that can sit for about six hours after it’s dressed, quietly improving on itself as the bread soaks and softens in the dressing and tomato juices. And I love Gabrielle E.W. Carter’s country panzanella, which I made last weekend. It cleverly turns grated watermelon into the base of a sweet and salty dressing. (It’s a big recipe, so don’t forget to halve it if you’re cooking for a small group.)

Leftover torn bread, toasted in olive oil, has plenty of other delicious uses in the kitchen beyond panzanella. 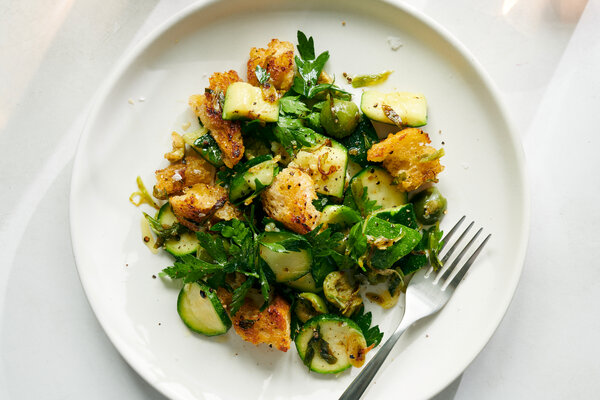 Panzanella With Mozzarella and Herbs

If you’re making that country panzanella with watermelon, or just looking for a perfect melon before the season ends, spend some time with the New York Times video journalist CC Allen.

She learned exactly how to choose the right fruit from the men of Carter’s Watermelons in Philadelphia, whose expertise runs deep: The family has been selling watermelon for more than 70 years.