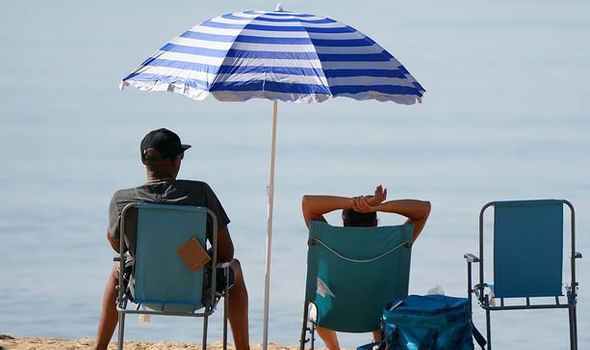 It will be the third time 2021’s record has been broken this week alone… and it’s only Wednesday.

And today’s sizzling 91F would put traditional holiday hotspots including Marbella, Mykonos and Tenerife in the shade.

Despite warnings of thunderstorms, it will be the sixth successive scorching summer day.

The Met Office issued its first amber extreme heat warning for parts of Wales, all of South West England plus southern and central areas of the country.

Staff at Public Health England (PHE) extended until Friday a heat-health alert, advising people to take measures to stay cool and to look after vulnerable family and friends.

Across the country, a variety of ways to keep cool were used, from crowds enjoying the outdoor swimming pool in Bourne, Lincs, to impromptu showers under Bath’s Warleigh Weir – as well as traditional beach umbrellas, seen in Bournemouth and around the coast.

Even animals from Africa needed a way of licking the heatwave, as a Rothschild’s giraffe at Chessington World of Adventures enjoyed a giant fruit and vegetable ice lolly.

Forecasters had expected thunderstorms with lightning and heavy rain to sweep across the East Midlands, as well as the South East and East of England yesterday.

Met Office spokesman Grahame Madge warned that “the lightning frequency could be quite intense.

“We could see very large hail. We could see those systems producing 30-60mm (1.2-1.4in) of rain within an hour or two.” He added: “The thunderstorms… are purely because of the heat so they’re not likely to affect the heat in any way. They will bring moisture and relief but it’s not an indication of things changing.”

Central England could see some of the highest temperatures in the UK over the next few days.

Grahame continued: “Normally we say the South East but the focus of the heat is slightly shifted west this time. The heat is certainly likely to last up to the end of Thursday.

“From Friday onwards there is a strong signal for the heat that remains to be concentrated more towards the north and west whereas parts of England and Wales will start to come back to temperatures near normal.”

The Met Office has also issued an extreme heat weather warning in Northern Ireland from this morning to Friday night.

PHE officials warned people to stay safe during the hot weather by keeping well-hydrated but by avoiding excess alcohol too.

They also advise wearing sun cream and trying to keep out of the sunshine from 11am to 3pm.