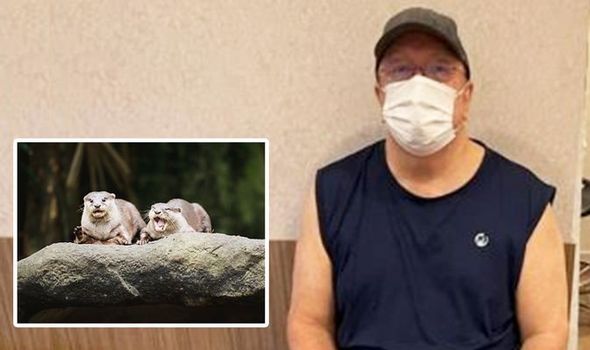 Graham George Spencer in his 60s and runs a maid agency in Singapore. The brutal attack left him with more than 20 wounds.

Mr Spencer, a permanent resident in Singapore, told The Straits Times: “I actually thought i was going to die- they were going to kill me.”

He told the paper he was attacked at about 6.40am at the end of a routine morning walk with a friend.

He said he saw about 20 otters crossing a dimly lit path in front of him. At this point the otters were about four metres away.

Mr Spencer told the paper it was the first time he had ever seen the park’s otters on one of his morning walks.

He said they were moving calmly but “went crazy” after another man in the park ran towards the otters.

The animals attempted to bite the jogger but he evaded their attack and the otters targeted Mr Spencer.

He said: “All of a sudden, they must have thought I was (the runner).” The crazed animals bit the expat on his ankles.

This caused him to fall and they then bit him on his legs with one of the creatures biting his finger.

His friend screamed at the animals who briefly stopped their attack. Mr Spencer said the pair then ran towards a nearby visitor centre and the otters gave chase.

A guard only returned to the centre after 10 minutes and provided bandages but Mr Spencer made his own way to the hospital.

He had to be given tetanus shots and antibiotics as well as requiring stitches for some of his wounds.

Mr Spencer said he has to return to the hospital three times for his wounds and has spent about $1,200 (£665) in medical bills.

The British expat spoke to a representative from the Singapore Botanic Gardens on December 3 and was told the authorities are investigating the incident.

He said: “You got to keep the public away from (the otters) because this will happen again.”

Mr Spencer has said he now has trouble sitting and is unable to sleep well. He is also unsure whether he will be able to travel to the UK to celebrate Christmas with his family due to his injuries.

Dr Tan Puay Yok, group director of the Singapore Botanic Gardens, told The Straits Times, that authorities are aware of the incident.

He said that otter bites were rare and visitors should only observe the creatures from a safe distance.

Bernard Seah, a member of the Otter Working Group, told the paper he believes he knows which otters were responsible for the attack.

He expected a family of otters called the ‘Zouk family’ were involved. However, he said: “In my years of documenting otters’ behaviours, I have never heard of such an aggressive attack. Such attacks are not common, and are likely to happen when the adult otters feel that the safety of their pups is threatened.”

Although otters are not typically aggressive, a five year old girl was bitten by some of the creatures in Singapore in 2017.