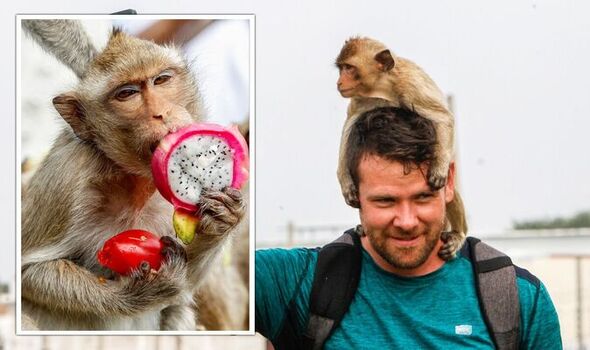 Many tourists visit Lopburi province in Thailand to see the region’s monkeys. Lopburi is home to thousands of the mischievous creatures.

Over the weekend, the monkeys were honoured with a huge feast of fruits as a thank you for their help in attracting tourists to Lopburi.

The Monkey Feast Festival is an annual event in Lopburi and a highlight of any monkey’s calendar.

Residents line up monkey statues bearing trays of food outside the Ancient Three Pagodas for the province’s honoured guests.

The hordes of macaque monkeys were filmed pouncing on the food, which is primarily vegetarian.

The founder said that previously there had been around 300 monkeys in the province but that number has since swelled to 4,000.

Kitwatunusont added: “But Lopburi is known as a monkey city, which means monkeys and people can live in harmony.”

One tourist said that a monkey climbed on her back and grabbed her sunglasses while she was taking a selfie.

Lopburi’s monkeys often eat fresh fruit given to them by residents and tourists, although they are sometimes given sticky rice or salad as well.

Monkeys are almost everywhere in the city centre and can be spotted on the roofs of shops and cafes. A troop even reportedly occupies a derelict cinema.

Female monkeys can reproduce twice a year and Lopburi’s population has boomed in recent years.

Despite the monkeys’ special status, there have been efforts to sterilise the creatures to control the population and minimise the risk of disease.

But away from Lopburi Province, monkeys aren’t always welcome in major tourist destinations.

Earlier this year, a Spanish tourist was bitten by a monkey at the Taj Mahal and had to receive medical treatment.

Hordes of monkeys have made the major Indian attraction their home leading to a risk in attacks and theft.

Monkeys are a protected species under Indian law and people are prohibited from hunting or catching them.

Management at the site have erected signs warning visitors to keep their distance from the monkeys due to the danger.

It is thought the majority of monkey-related incidents occur when tourists approach the monkeys to attempt to take photos.

Monkeys can bite or scratch and tourists may need to receive hospital treatment due to the risk of disease.

Tourists are advised to keep a safe distance from monkeys and should always follow advice from local authorities.